DON BROCO – “Dropping the momentum and disappearing for a year or two can be a very dangerous thing “. Simon Delaney.


The UK’s rising contemporary rock four-piece, Don Broco, have been riding a 45-degree angle since the release of their debut back in 2012 and with their most recent studio offering entering the UK charts at a respectable number 5. Overdrive caught up with guitarist, Simon Delaney to discuss the forthcoming tour, which kicks off this weekend, before they hit Ireland on Monday, April 23rd for their biggest headline show to date. 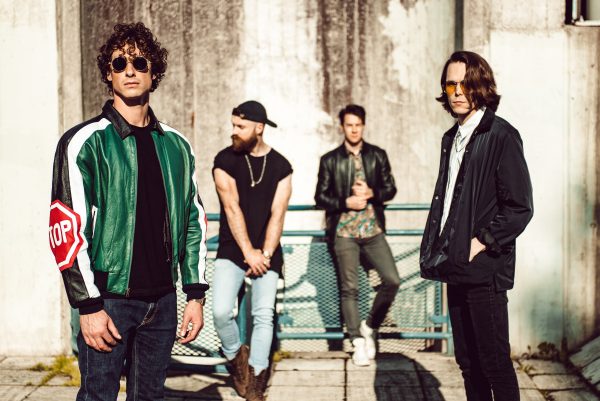 Speaking from his home in the UK, Delaney is in fine form, as he talks about the band’s recent string of US shows, to which they just returned from earlier this week and is genuinely excited about getting back on the road for this next leg of dates.

OD – This album has seen you perform in a much broader range of territories which is always a good sign. I know that you all experienced a sort of road-block of sorts and had some difficult times in the past, but things seem to be on the up for Don Broco these days, would you agree?

SIMON – Yes, 100%. As you say, we’ve had some problems in the past, especially getting out music to the wider world when we were with SONY because they wouldn’t release anything outside of the UK, which obviously meant that touring in other countries was pretty much pointless, because nobody had heard of the band. So now, we are very lucky to be able to spread out wings with the fact that for the first time we had a simultaneous worldwide release for ‘Technology‘ and it’s meant that touring has taken a whole new meaning for us and we are really starting to make some headway this time around.

OD – When listening to ‘Technology’, on the first few plays, I found that there is a lot of personal experiences and subliminal references in there rather more than ‘Automatic’. Do you like to sit back and get the different interpretations and perspectives from other people outside of the band?

SIMON – Yeah, that’s one of the most gratifying things about songwriting for me personally. It’s very easy to get so hung-up and get almost lost in the minutia of the song and into the nuances of the song and it becomes a very personal thing for us all in the band, and then for someone else to get a totally different feeling, emotion or reaction to that very same piece of music is just fascinating. That alone is why I think writing and releasing music is so much fun. There are no preconceptions about how people are going to react to the finished tracks and it’s just so interesting to get the feedback and especially the interpretations that each person takes from the music.

OD – A lot of people find it very hard to classify what sound Don Broco have. There are elements of 80’s electronic, almost pop arrangements woven into some of the tracks on this album, as well as the huge guitar driven choruses also. I’m aware that you all listen to a very eclectic range of music, but do you consciously cross-pollinate different styles to see what may come of it during the writing process?

SIMON – We all have very crazy eclectic tastes for sure and to answer the question, yes, it does find it’s way into the writing process (laughs). When it comes to the process of writing, we don’t actually make a conscious decision to write something that sounds in such a particular way, it just flows through the music naturally and because we’re all very open-minded, we’re not afraid of doing something different and trying new things.

I personally love big heavy guitar bands, but most of my pop sensibility comes from the 80’s like with all the drum loops and the electronics, stuff like Prince, INXS and all of those type of bands. So, whenever I’m putting a song together, I normally start with drums, percussion and a bass line that most of the time would have a nod to those 80’s pop influences. Then, when it then comes to the guitars, I just make it as heavy as I can (laughs).

OD – It’s kind of hard to believe that the album has only been out since February as there seem’s to be a plethora of singles already out there. This approach of multimedia pre-releases seems to be a winning formula of sorts and seeing as you charted at number 5 in the UK, it’s worked for the band in a positive way. Would you agree with this method going forward?

SIMON – We approached things in a totally different way with this album. In the past, our old label (Sony) had a plan about how the music was supposed to be released, for example, the album had to be ready to go by a certain date, there had to be a single ready to launch before the album release date, and then finally when the album finally came out there had to be two subsequent singles lined up, ready to go.

That whole mechanism really doesn’t lend itself to the way music is consumed these days, so, when we were writing songs for ‘Technology’, rather than sit on the music, we just went ahead and put it out there. We just felt that there was no point in disappearing for a year or two during the writing process and ultimately slowing down our momentum when we had some banging music that we were really excited about, ready and waiting for the public to hear it.

Going forward, as soon as we have something that we feel is decent, we’re just gonna keep pumping it out and not keep people waiting. The industry has changed so much and we just have to adapt to the environment as best we can. Dropping the momentum and disappearing for a year or two can be a very dangerous thing and ultimately, you have to almost go back to the start and start plugging the hard work all over again.

OD – Having played most of the smaller clubs in the UK extensively, and now taking to the stage in much bigger mid-sized venues, there must be moments for you that you realise, ‘finally, it’s starting to pay off’. Would you agree that this has a positive reaction for the band as a whole?

SIMON  – Yeah, we used to totally look at venues like Brixton Academy or Alexander Palace and hope that one day we could play there. It’s amazing to finally get to play these venues, but it also makes us hungry for the next thing (laughings). It just drives us to keep pushing forward and to try to achieve more than we ever thought we could when we first started out.

OD – Talking of venues, it must be strange to have finally reached a level in the UK and Ireland but having to kind of start all over again when you do shows in the US. Would you agree that it’s a firm reminder that the journey is still a long and hard one in front of you?

SIMON – It really is man! There’s no real easy way to break America, apart from just solid touring and promo work. We really do take for granted here in the UK that it is a very small place in relation to the US and it’s relatively easier to ‘crack’. Don’t get me wrong, I’m not saying that it’s been an easy journey or that we’re totally there just yet, but when compared to the States, it’s much easier.

We can do a tour in the UK taking in 10 major cities and we’re done. When taking on America, there’s like 5/6 weeks across thousands of miles and it’s not even made a dent in the schedule.

OD – Having been in this business now for the guts of 10 years both as an unsigned and now signed band, do you see any pitfalls in the business that smaller bands should be aware of. I ask this because I get the sense that Don Broco have had a somewhat interesting journey on the business side of things? 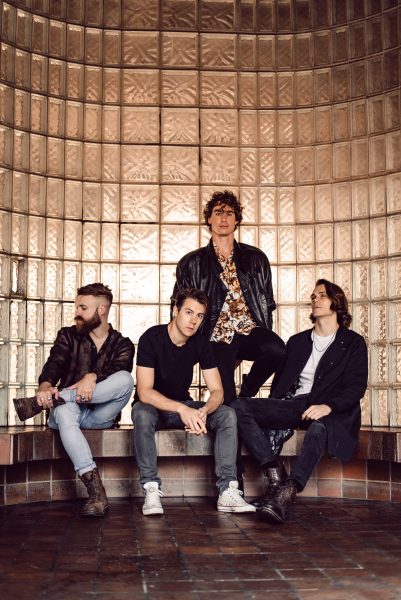 SIMON – Yes totally! For bands that are starting out. When you’re looking to get signed, there seems to be a feeling that getting a record contract is the end of the tunnel and after that, it’s all downhill and happy days.

The reality of that is, the real work only starts to begin once you sign a record deal and it’s the first step of a very steep ladder.

OD – There is no doubt that music has changed over the last few decades, especially the rise of electronic and the fall of guitar-driven bands. We’ve seen the likes of Gibson Guitars going into receivership and just today, the news of Guitar Centre in America facing immediate closure of all stores. Do you have any thoughts on the decline of guitar-based genres falling by the wayside and do you think that the future of this music is in jeopardy?

SIMON – I’m definitely very conscious of the big outlets, or general public outlets for music, not really giving guitar-based music a fair amount of coverage. Just look at most of the popular radio stations and you’ll see that they are mostly dominated by other genres.

Personally, I love all kinds of music and I’m a big fan of a lot of electronic music, but I really do feel that there should be a balance and these mainstream media platforms should be presenting a broader picture of what’s going on, as there is a huge amount of underground guitar music happening everywhere, but unfortunately it’s staying underground because it’s not really given any real decent exposure on a mainstream level like other genres.

This sound horribly clichéd but I really do believe that guitar music will make a return to the charts and rise up again. I mean, look at bands like Bring Me The Horizon! They are one of the best contemporary metal bands in the UK right now and they are playing arena’s all over the world, and that’s not something that people can ignore, and I think that once we have a few more from that kind of ‘crop’, we’ll be in a good place.

OD – What albums are you listening to right now that you would like to give a shout out to?

SIMON – Well, I just bought the 25th Anniversary of REM’s ‘Automatic for the People‘ which is just awesome. With regards to more recent stuff, I’ve been listening to a UK band called Press To Meco and they are a technical, sick-as-hell, guitar band. Imagine if Reuben met SikTh and that’s the vibe.

I also just picked up System of a Down’s classic ‘Toxicity‘ on vinyl which is just such a banger of an album.

OD – The most criminally underrated band of all time would be…?

SIMON – Aww man, that’s a really hard question. I would have to say Reuben! They are just an unbelievable band that never really reached the heights that Biffy Clyro did by sticking it out.

OD – If you could sum up this business in one word, what would it be?

SIMON – I would have to say ‘tantalising‘! (laughing)

Don Broco will be playing in Dublin’s Tivoli Theatre on Monday, April 23rd with tickets on sale NOW via Ticketmaster. 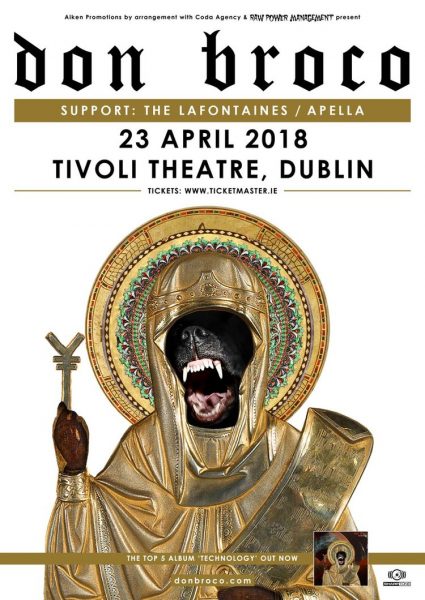