Don Broco, the burning white flame of British contemporary Rock, are gearing up to release their yet to be titled sophomore album this Autumn and are planning to bring their A game on the forthcoming Kerrang! Tour. 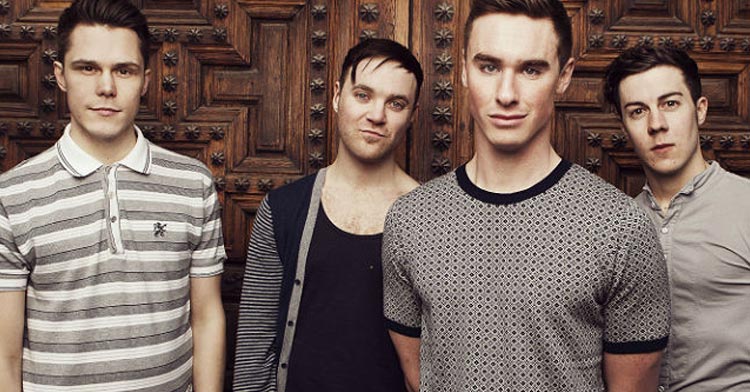 OD – Don Broco has been referred to by the media as the bright shining light in British rock, how has the journey been from back when you started in 2008 and what was the milestone that solidified the fact that this would be a full time career for you guys?

Rob – For us, it was a slow process really. When we started the band, we were always questioning ourselves about whether this was the right thing to do. We really had no support to help when we started out and no label to back us, so it was probably the festival circuit that was a real eye opener for us and that’s when we really considered to make a career of it. Download Festival was the first festival that we had ever played and it was amazing, because we had done a lot of DIY shows for promoters for no money and there was only like 10 or 20 people turning up at the most (laughs). These are not the type of shows that made us think,”wow were are gonna really make it!”. 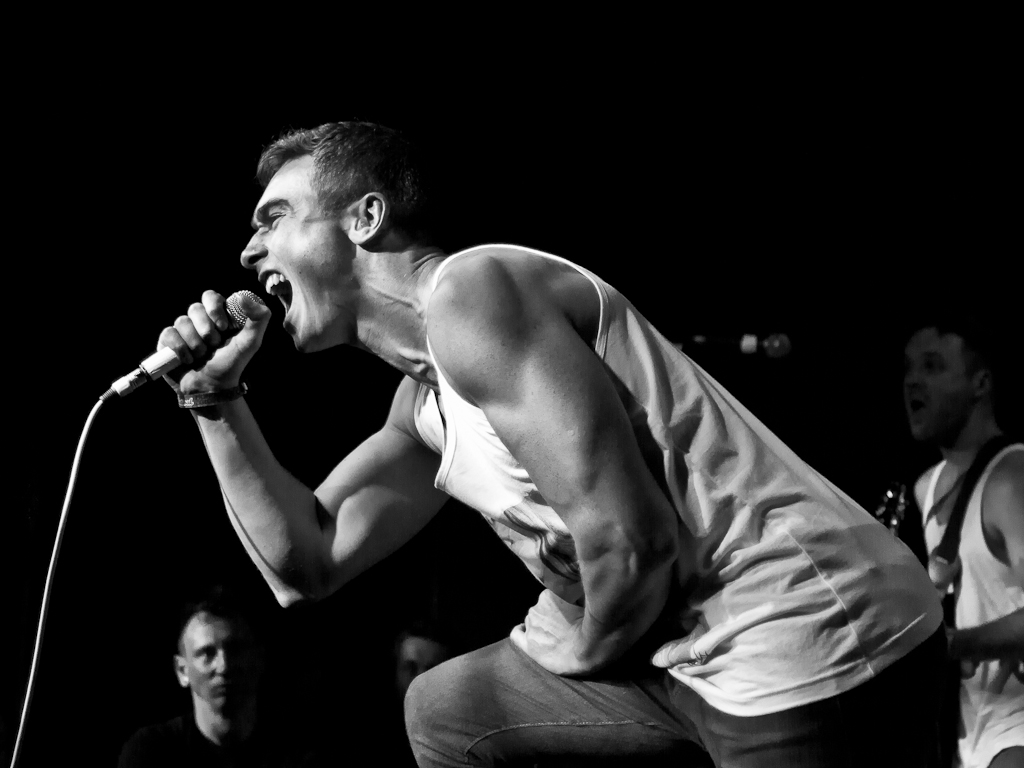 The advantage of playing festival slots is that they bring people from all over the country and from all over the world. We found ourselves playing to a large crowd in one tent and they were all having a great time and that’s when we really started to think about doing it full time. It was seeing that we had an audience and we could handle ourselves on a stage of that size, playing at an event of that magnitude, that really helped us make the decision to do it full time.

OD – It took you four years before you had released your debut “Priorities” can you talk a little about what it was like to secure a deal in today’s current record industry?

Rob – It was kind of tough at the time, because we had no management and we had to really make all the decisions, as we were running ourselves at the time. We had recorded the album, but there  was no one really stepping forward to commit to taking us on, even though we had widespread interest. We knew there were some people that were interested, but there just was not a deal on the table if you know what I mean. We had to be really savvy in the way we handled it, because we were not really into the idea of signing with some independent Indie label that had no money. 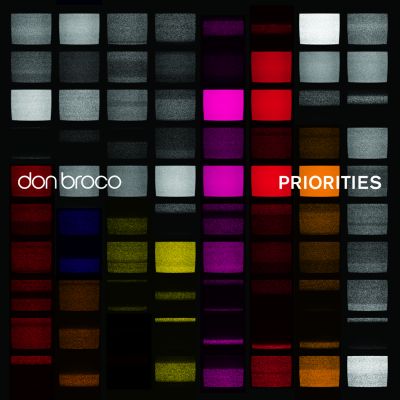 Luckily we signed to Search & Destroy Records which is co-owned by our management company Raw Power Management and Sony Records. We are so pleased that we waited around and got a great deal. We kind of have the best of both worlds really, as Search & Destroy Records is a small label that is run like an indie and really, really care and look after their roster of artists, but there is the bonus of the major label backing with Sony, which is great. For us, it was the perfect combo to release our debut album “Priorities” and get it out there. We had to be quite patient with the whole process, but I’m just really happy about it all and I feel that we landed on our feet with Craig (Jennings, owner of Raw Power Management and Search & Destroy Records).

OD – The new album is now available for pre order with a release date of Autumn of this year. You have already released “Money Power Fame” and “Fire” recently. Are the plans to release more tracks over the next few months?

Rob – Yea, definitely. It’s kind of a weird place for us now, as we finished the album last week and have actually just signed off on everything this morning (February 2nd)! There were a few little things to adjust like mix points that we were tweaking and everything was sent off this morning for mastering. So today is like the day when we feel like a huge weight lifted off our shoulders. We are totally happy with the entire album and just can’t wait to get it out there. We keep ringing up our label and asking them, “can we put out another tune?” (laughs) as we are just desperate to get more new music out! It’s great to get “Fire” out there, but we are going to be strategic as to what is the next song we are going to release and when we do it.

OD – Can you talk a little about the title of the new album? Did you have any other titles that you were thinking of?

Rob – Well, we have a couple of titles in the running at the moment, but we really had decided to get the album completely finished and then listen to it back in full and make a final decision on it. I can’t really give anything away right now, but I’m sure that we will come to a decision soon.

OD – Is the album artwork the current image just the bands logo, or are you keeping that under wraps also?

Rob – Yea, we have a concept for the album artwork and we are planning to shoot it when we come back from tour. We actually have a meeting about that next week, so I guess the next process of the new album will be getting the imagery right and looking at the art direction of it all. It’s not our forte, as none of us are really any good at art (laughs), so we will be collaborating with some photographers and designers that we work with and get into a room and hash out some ideas. We have a brief idea of what we would like, but once we sit down with everyone I’m sure it will all come together.

OD – From the music that we have heard so far, there is a very sick, deep and warm sound off the production, how was the entire recording process different from this recording as opposed to “Priorities” and even as far back as “Big Fat Smile”?

Rob – Yea, it was completely different to anything that we have done in the past. When we did “Priorities” we had actually demoed the entire thing on our phones in the back of our van! We got together after the tour and figured out all the parts that we liked from our mobile phones and put it all together in our rehearsal space and pretty much recorded it straight up around at our mates house, who was the singer in Tom’s (Doyle – Bass) old band. The whole process was very quick really.

This time we had much more time and wrote about 16 or 17 songs with had hundreds and hundreds of ideas floating around also. The process was completely different and we couldn’t be happier with it. This was actually the first time we had written the album with our new bassist Tom Doyle and he really brought this whole new dynamic to the writing and recording process, which really worked well. Tom has some really incredible ideas and with his bass playing, it doesn’t really get any better.

We really fell that we have captured a fantastic live sound on this record thanks to Jason Perry and our old producer Dan Lancaster, who just nailed it and gave the record a soul and captured the live sound as well as giving it a lot of heart. It’s quiet easy to get lost in modern music with all the effects that can be used, but I really feel that we captured that real Don Broco sound, but it has that real human feel to the album and it’s all down to working with those guys.

OD – You will be playing Dublin Feb 11th, will you be playing a lot of new material from the new album?

Rob – Yea, we plan to play “Money Power Fame” and “Fire” as well as two other new tracks as well.

OD – Can you give me the names of the new tracks that you will be playing live?

Rob – “Superlove” and “Automatic” are the other new songs that we will be playing. We have just been rehearsing those songs right now and I came out here to talk with you. The new stuff is sounding amazing and we just can’t wait to play them live. So looking forward to getting on stage and ripping it!

OD – You will be embarking on the Kerrang! Tour with We Are The In Crowd, Bury Tomorrow and Beartooth. Have you ever played with any of these bands before?

Rob – We actually played our very first show outside our local County Bedford with Bury Tomorrow in Plymouth. We traveled all the way down and played our half hour show and traveled back, but we stayed in touch with Bury Tomorrow and became good friends. We always were trying to figure out how we could do something together, so it’s great that Kerrang! managed to organise for both of the bands to tour together. We Are The In Crowd, we actually go to play with them a few years ago on some festivals and they are just awesome live, so can’t wait for that.
We have never seen Beartooth before, so we are really looking forward to that. When we start the tour we will be checking them out. They are going to be bringing some serious riffage, that’s for sure!

See you in Dublin for a solid line up show! We can’t wait to get there and rip the roof off the Academy!

The Kerrang! Tour will stop off in Dublin’s Academy on February 11th with performances from DON BROCO, WE ARE THE IN CROWD, BURY TOMORROW & BEARTOOTH.

For your chance to win tickets to the show and TO MEET DON BROCO, all you have to do is click on the graphic below and:

2. TAG YOUR FRIENDS ON THE GRAPHIC 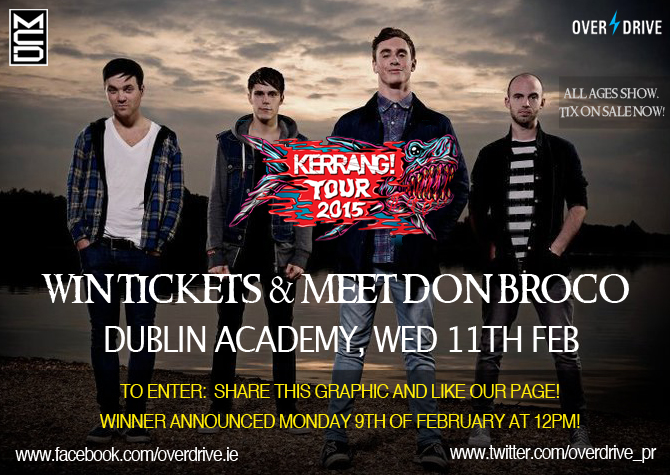