With this years Download Festival proving to be a monster that just keeps getting better, Overdrive battled the elements  to catch as many bands as possible over the weekend of June 14th-16th.

A seasoned Donnington veterans, we were prepared for all weather conditions and were determined to take in as much music as possible, I know its a hard job, but someone has to do it, right?

Friday saw the main stage offer up the big hitters of the day with highlight performances from a range of bands including Papa Roach who did their best to bring the Nu-Metal tinged sunshine to the blustery arena by opening with the first single off their current album “Still Swinging”.

Papa Roach then wasted no time in busting out ‘Between Angels & Insects’ to the delight of all around, before coming back to newer material in the form of ‘Where Did The Angels Go?’The band sounded tight and enthused energy throughout their set, which is always enjoyable to see in a band that have been treading the boards for a while and when frontman Jacoby Shaddixannounces 2013 sees Papa Roach celebrate 20 years as a band you can’t help but be both impressed and pleased for them and feel really, really old.

Papa Roach manage to squeeze a lot into their short set, including ‘…To Be Loved’, ‘Getting Away With Murder’ and, of course, ‘Last Resort’, each song seeming perfect for a festival main stage and Jacoby always being the perfect frontman, be it rocking out on stage, bantering with the audience or getting down along the barrier and smearing mud all over himself just to show that he is just like everyone else. 4/5

Next to grace the stage was Down wasted no time in bringing the heavy doom end of the joint to the proceedings. Phil Anselmo was in fine form, gurning and pacing the stage like he was about to kick the shit out of someone. 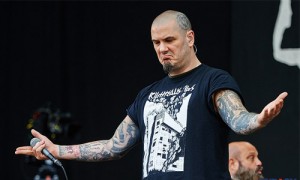 The Southern Doom merchants slammed though a strong set list that included opener Eyes of the South along with Witchtripper, Lifer, Hail the Leaf, Stone the Crow and a special shout by Phil to his “brother” Dime with Bury Me In Smoke. A surprise appearance from Hang the Bastard who commandeered the bands backline saw the mighty Down bid farewell to the large main stage crowd who were clearly yearning for more. 4/5 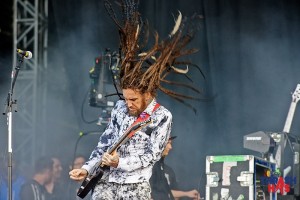 Korn are about to take the stage and this writer can hear comments such as “please be good” and “I hope they don’t fuck this up” bubbling around and when the vast main stage fills with dry ice and the instantly recognizable ride cymbal begins for “Blind” the entire field roars with approval.  The return of Brian “Head” Welch has influenced the band back to the driving force of angry, twisted classics that have seemed to have been gathering dust over the past few tours. 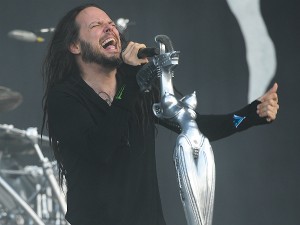 This was the set list that everybody was looking for, Got the Life, Twist, Shoots and Ladders and even the Skrillex collaboration tune Get Up that has left to right, front to back bat shit crazy audience impact. Ending the set with a Happy Birthday sing along to drummer Ray Luzier gives the impression that all is cosey in the Korn camp. 5/5

Rounding off the Friday on the main stage see’s the emotional return of Iowa stage wreckers Slipknot, who proceed to destroy Donnington with a relentless attack on their musical legacy. Opening with the traditional Iowa tour white stage curtain and dressed in the boiler suites from that tour, the band smash through hit after hit with opener “Diasterpiece” followed by Liberate, Wait and Bleed, Get This, Before I Forget, Eyeless and The Blister Exists. After a few interruptions due to the main front barrier breaking the band punch out more classics such as Left Behind, Pulse of the Maggots, The Heretic Anthem, Psychosocial, Duality and Spit it Out. 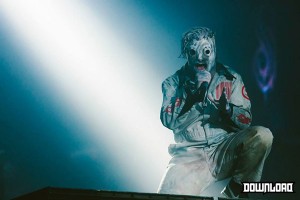 Having graced the stage at Donnington back in 2009 with the now dead Paul Grey leading the charge on bass, it was obvious that this was a very big deal for Slipknot and although the band didn’t quite reach the spine tingling performances that was displayed in that 2009 show or even the 2011 Sonisphere performance, mostly due to the blustery weather conditions they still put on one hell of a show that saw the stage exploding with impressive pyro and a relentless, boundless amount of energy from all members. 4/5