INTERVIEW – VEKTOR’S MASTERMIND DAVID DI SANTO ON A SPECIAL BUCKETLIST GOAL, PHILOSOPHICAL ASPECT OF TERMINAL REDUX AND WHAT HELPS HIM TO CHANNEL HIS CREATIVITY


Are you bored of Thrash Metal bands recycling the same old, repetitive patterns? Are you longing to have your mind leaking out of your ears when it is processing meticulous layers of tonal strands? You are yearning for balanced complexity that is so wonderfully intertwined with the sincerest musical motives but with the same merciless kick of Thrash Metal? And you haven’t heard of Vektor? Dear, you’re in for a treat. 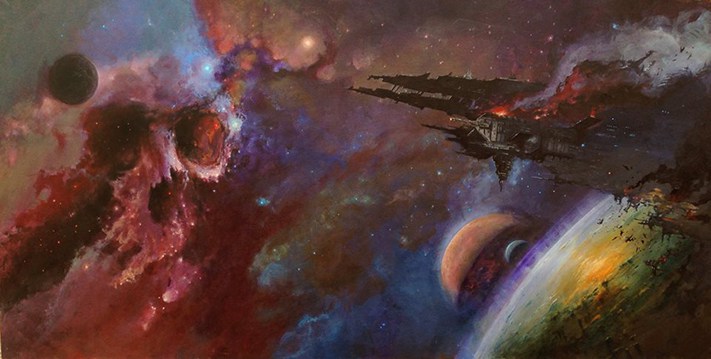 My absolute condolence, if you missed Vektor’s debut in Ireland last week at the Voodoo Lounge, as they played the vastness of their ingenious, newest album Terminal Redux in its entity for the very first time. Overdrive had the pleasure of chatting with frontman David DiSanto.

The founder and songwriter of Vektor seems calm, humble and ready for battle. There is a charge in the air – Vektor prepare themselves mentally for the imminent gig as they wish to transmit the closest and sincerest version of what moves them internally and celebrate this with a bunch of Irish madmen.

OD: David, I understand this is your second time to Europe?
DiSanto: Yeah, well. Second tour in Europe.

OD: On this tour you have already visited places and festivals you have never visited before, like Bloodstock Open Air last weekend and Ireland today. Can you describe the reaction or response to Vektor on this side of the planet?
DiSanto: I mean, everytime we’re out here it’s amazing. Bloodstock was amazing, the crowds were crazy. I was a bit surprised, because it was the last day of the weekend and they still had a bunch of energy for us.

OD: Yes, the people were insane!
DiSanto: Especially when we did the Wall Of Death during ‘Hunger for Violence’.

OD: And when you were writing Terminal Redux, were you envisioning such a reaction?
DiSanto: Honestly, I knew that for every metal band in history the third album is the “make it, or break it”, so I just poured my heart and soul into this record. I just put everything into it, and I am glad it worked out. 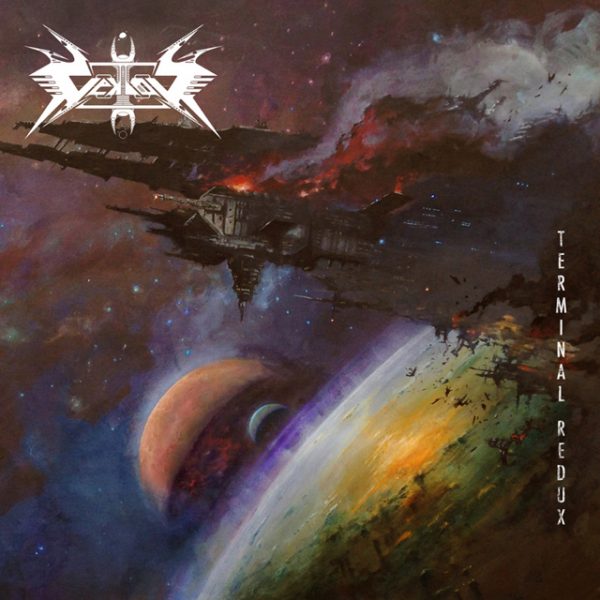 OD: When you’re travelling on tour, what songs do you put on just for shits and giggles in order to relieve the tension of travelling?
DiSanto: We don’t really have any music ourselves on this tour, we didn’t bring any CD’s or have access to data, or anything on our phone. But our tour manager, Dimmi, has been rocking a lot of Iron Maiden. One tour we did a whole week of 80s pop!

OD: You have spawn an abundance of narrative material on this concept album. And I was wondering if you could see an animation of one of the songs for a music video?
DiSanto: Actually when I was writing it, finishing it, I added another thing to my bucketlist. I was thinking: “Ah, this could be turned into an Sci-Fi animation series”

OD: I don’t think any other band has done that before!
DiSanto: I can see it all in my head, but it has to be done with the right team of people. I don’t want it to be half-assed.

OD: And would you like it to be done with real actors or rather cartoon animation?
DiSanto: I don’t know. Either way, honestly. As far as getting real crazy and accurate it may be more budget friendly to do an animated film, because if we do it real live action, it could end up cheesy really fast.

OD: Although it could be so dorky, it’s brilliant again! I understand it took a while to find the right people to realize Vektor. I was wondering how did you get in touch with your current bandmates?
DiSanto: Time and patience. I tried out a lot of other people in the beginning, in Phoenix at the time, around 2002. I recorded this demo. I found Willy, the first drummer. It was just me and him. We were skateboard buddies. We recorded the demo “nucleus” and that kinda allowed me to branch out. My ideas were so whacky, it was hard to explain to people or to show it on the guitar, so it was easier to hand out the demo, like: “here, check it out”. I guess it was just a lot of trial and try outs with a bunch of people, before it really clicks. Erik Nelson (lead guitarist) was the first guy in 2004, and then we went through some line up changes, Blake Anderson joined – our third drummer – in 2007 and bassist Frank Chin  in 2008. 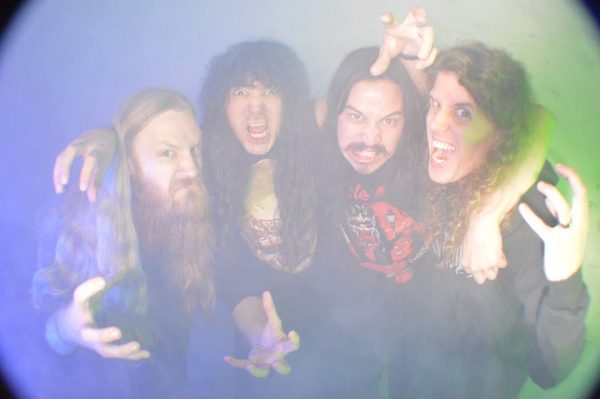 OD: And after the line up has settled, did you feel an acceleration in your writing process?  Receiving the right things back from your bandmates, did it push you forward?
DiSanto: Not really, I do all of my writing whenever I am inspired. It’s hit or miss.

OD: Obviously you draw a great deal of your inspiration from the universe, something that vast the human mind, or well the average human mind, cannot possibly comprehend. Reflecting back onto the relativeness of the human species, I was wondering if there was something in particular in human behviour you want to criticize?
DiSanto: Yeah, I mean that what all of our albums and songs are about, beyond this album. But this album in particular, it deals with balance. Humans want to create a sense of control over their environment, and in their minds, our minds. We think that we are doing good, or well not all of us, because some do realize that we are really fucking the planet up. But we are creatures that cannot create without destroying something else.
no matter what you do, you’re always messing something else up.

OD: You mean, physical creations?
DiSanto: Yeah. Even just existing, that’s what just life is. You consume to survive.

OD: But then again we create manifestations of ideas, like music and art.
DiSanto: But that just makes humans happy. The ultimate end of it is, it is not up to us to create balance. We better leave that to nature.

OD: Well, what qualities in human behaviour do you celebrate then with this album? There is so much light and shade on this album, I receive a great deal of positivity.
DiSanto: That’s it, the thing to celebrate is emotion. We are emotional creatures. Love, Good times with buddies, that’s what life is all about.

OD: And after seeing how people embraced this album, have your motives to send a message even deepened?
DiSanto: My lyrics have always been about philosophy, trying to get people thinking about the world we live in. I grew up listening to punk, I have always thought it should have a message. Sure we do Sci-Fi, but at a deeper level, we are more philosophical. Its not about “gaah there is this space squid!”

OD: Or space lizards secretly controlling the governments! Since you mentioned skateboarding earlier on; you poured 5 years into this album – which one can absolutely hear – and I imagine the resting phases in between writing are often equally as important as the actual production phases. In those resting phases, did you have other artistic outlets?
DiSanto: Ah, I was very consumed by this album over the past five years. Consumed and possessed. I didn’t think about much else, it’s crazy how much I thought about this album.

OD:  That makes sense seeing that the response to this album has been unreal. The incredible amount of energy you put into it – it’s coming back to you.  And when being so obsessed and consumed by writing an album, I imagine it to be hard sometimes – I am curious, have you adopted any habits in your daily life that aided your productivity?
DiSanto: I love sleep. I try to sleep in as long as I can, whenever I can. It is always good. I have been trying to be more mindful.

OD: Mindful of anything in particular?
DiSanto: Just to be more mindful.

OD: As in aware?
DiSanto: Aware of your surroundings. Noticing you’re sitting in a chair, stuff like that. It kinda helps me to tune in my brain, so it’s not flying all over the place. But its kinda weird that you have to think about such basic things. It helps me. It like you drive home from work sometimes, and you don’t even remember the journey like “whoa, how did I get here?”

OD: …and boom, five years have passed!
DiSanto: Yeah! People have to be more mindful, so they can enjoy life more.

OD: I absolutely agree. Now, just to round it off: What is next?
DiSanto: Tour. We are going to do an US run in November, then hopefully we will be back out in Europe in spring. Other than that, I can not turn off this writing thing in my brain, so I have a bunch of ideas, not gonna make any promises to when the next album is gonna be, but hopefully it won’t take another five years.

OD: I bet it won’t, since you’re on the right path. Thank you very much for this interview! 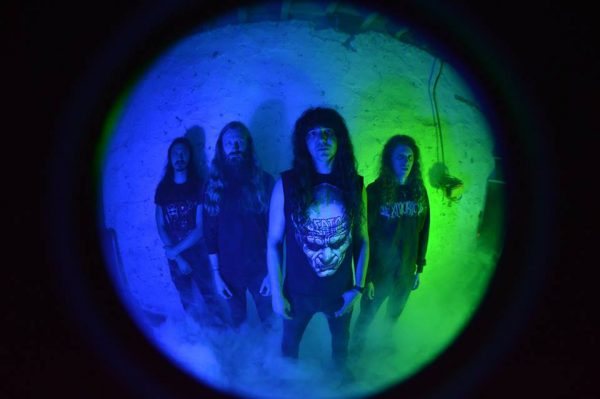 The response of the Irish crowd at the gig was lit by an intensity I have rarely felt. Even after fighting with technical issues concerning their gear and backing track, or crowd surfers knocking the mic stands into oblivion, Vektor prevailed. They had us compressed and at the tip of their thumb nails.

Below you can find live footage of Vektor playing at the Voodoo Lounge, Dublin!