England’s Power Metal collective, DragonForce took to the stage in Whelan’s in support of their new album. Overdrive was there to catch every guitar lick and “shred” face that was on offer, and let us tell you, there was plenty to go around! 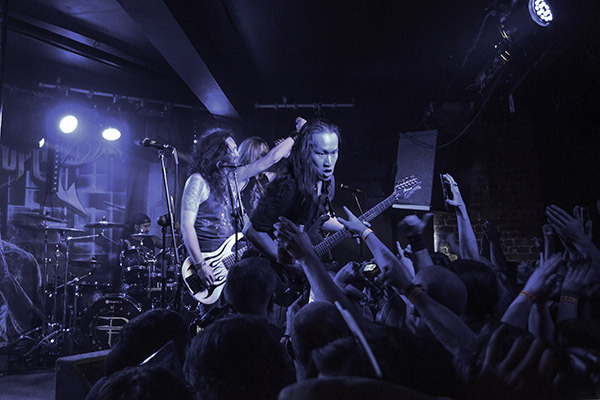 Dragonforce are a force of nature. Their power lies in the force of their songs, the meaning, the lyrics, and most noticeable, their guitar players Herman Li, and Sam Totman. In the past, ZP Theart was the larger than life vocalist. But since he left the band in 2010, a relative unknown, in the form of Marc Hudson has since replaced him. Marc struck the big time when he landed his part in Dragonforce, and most importantly, sailed through the storm when he was due on-stage for the first time with the band. They were on tour with none other than the mighty Iron Maiden. Talk about falling in the deep end…..

Dublin’s alternative live venue Whelan’s has a relatively low capacity. Conjuring Fate , from Co. Antrim, rock the joint with their power-riffs and crowd-riling lyricism. I pick out a cheeky line from Iron Maiden’s “Hallowed Be Thy Name” amidst their set. It does not go unnoticed. I had a small niggling feeling that the bass drum may have been mic’d a bit high. But I needn’t have bothered wondering. I was standing right beside the bloody speaker at the corner of the stage. Question answered there. By the time the band was done, Whelans is jammed. I’ve been here many times before, and this is the first time I’ve ever seen it so full. A short but intense 40 minute set announced that Conjuring Fate was ready to take flight among the great rock acts of the world. What more ‘metal’ way to fly is there, than on the wings of a dragon?

Dragonforce approach, one by one, led by new drummer Gee (Jee) Anzalone. Everyone there knows who he is. He seems humbled that we are all aware of his name before he even sits down. Li and Totman follow behind keyboardist Vadim Pruzhanov and bassist Frédéric Leclerq. “Defenders” (Maximum Overload), smashes through the barriers of anticipation with furious energy, and in the middle of it all, runs out Hudson, welcoming Dublin to the heart of Dragonforce. Let the fun begin!

On the record, Matt Heafy (Trivium) lends his voice on vocals to this track, but it doesn’t matter here – everyone else in the venue is doing more than enough shouting. “Fury of the Storm” (Sonic Firestorm) creates as what can only be described as the biggest circle pit I’ve seen in Whelans since Hatebreed last year. Hudson takes a brief time out from his hectic night to thank us all for being there at the 5th show on the Maximum Overload world tour. Leclerq looks on with a smug grin as the enthusiasm from the crowd paints a happy picture for the band. This was going to be quite a memorable show. So off we go. “Three Hammers” (Maximum Overload) has a slight Manowar feel, in the same vein as Norse lore of old (either that or it’s a song about a groups of carpenters, but I doubt it). Hudson asks what we want to hear next, so a whole load of different answers get fired at the stage. He breaks out that cheeky grin and boasts: “How about a bit of “Valley of the Damned?”.

Who am I to argue with possibly the fastest band in the world that is not based on roaring vocals and songs about death visited on your fellow man for personal wrongdoing? They break out “Black Winter Night”, before another melodic new addition from their new album “Symphony of the Night”, with Pruzhanov making his way to the front of the stage for a bit of virtuosity with his peers. But the stars here are Li and Totman.

Each taking a corner of the stage they play, not to the crowd, but AT the crowd: resting their weapons on their leg and pointing it to the stars, they shred the shit out of those strings. The only thing missing here is smoke coming out of their hands. Li, in particular, doesn’t have fingers – he has blurs. You cannot see what he’s doing from 2 feet away because he does not slow down enough for light to show you. I’m a guitarist myself, and I’m trying to see what he’s at during “The Game” (Maximum Overload) and “Heroes of Our Time” (Ultra Beatdown). There’s no use. He’s like the Usain Bolt of the guitar world and I have 1 leg chained to a concrete block in comparison. He’s THAT fast.

A slight oversight led the guitar tech to pack away the 7-string Ibanez guitars for “the Sun is Dead” (Maximum Overload), so we were treated to a short free-form jazz session from Leclerq and Anzalone. Hudson joined in clicking his fingers like there was nothing wrong. I think everyone needed a bit of relaxing music for the excitement that was going on. It doesn’t last long, and we’re soon back into the thick of it. Everyone moves around onstage during the show, allowing pictures and high-fives mid-song. It was a spectacle. I have to mention that Li manages to change guitars without anyone noticing in the middle of the next song entitled “Tomorrows Kings” (Maximum Overload). Truly skilled at using the gaps between chorus and verse to his advantage. The final song “Cry Thunder” (The Power Within), is thunderous and fills the crowd with enough exhilaration, that you’d be afraid someone would have a heart attack. It’s truly an awesome thing to behold. Hudson feeds Leclerq some JD straight from the bottle in the middle of the song. Man I want THAT job! As the band leaves the stage, the screams for more are deafening. “DRA-GON-FORCE! DRA-GON-FORCE! DRA-GON-FORCE!” It’s hard to hear yourself think. The sights tonight have been amazing.

But sightings change. The encore begins with rapturous applause. I’ve never seen a circle pit to a Johnny Cash song, and I probably never will unless I see Dragonforce again. But I saw one that night. Growing up in rural Ireland, I’ve heard this song millions of times on the radio, on tape in the car with my parents, played in pubs at country & western nights, but this was new. This was history. “Ring of Fire” (Maximum Overdrive) will never sound the same again. Finally we reach the end of our power journey, with “Through the Fire and Flames” (Inhuman Rampage), the crowd favourite. We’re done for tonight, or so I thought.

The band departs after a smashing show, but re-appears 15 minutes later to party with their people: posing for pictures with fans, meet-and-greets at the merch stand, and talking to everyone that was there. Salt-of-the-earth, grounded guys who, despite their virtuosity, remember where they came from. They were fans once too and repay the loyalty of their people by hanging out and drinking with them. Top class gig all round, and in such an intimate place as Whelans, (which was a surprise to me at first since I’ve seen them at Download a few times), it’s one for the wall of fame behind the front door of the bar.

A few weeks ago, Overdrive supremo Oran O’Beirne got to speak to Herman Li about the upcoming show, See what he had to say about it and other stuff here.

Fury of the Storm

Symphony of the Night

Heroes of Our Time

The Sun is Dead

Through the Fire and Flames