On a cold and miserable November night in Dublin’s Voodoo Lounge, something unique happened. We were treated to a night of musical mastery! 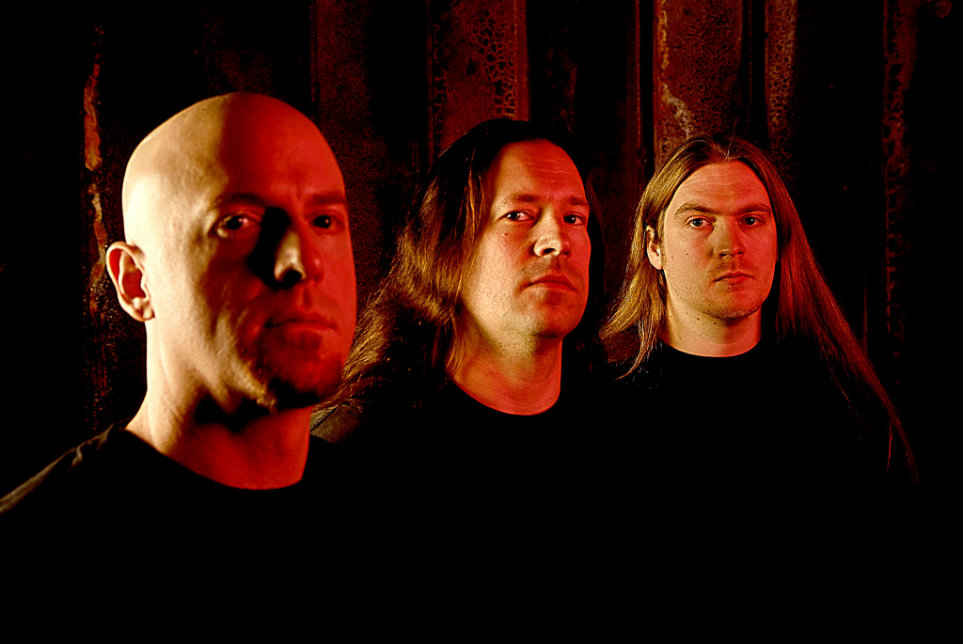 First up on the night were metal hoodlums Fallujah. A 5-piece troop from San Francisco with a penchant for the atmospheric death metal, the deathly growls and rampant drum-work brought the attention of the bystanders in the almost empty bar towards the stage. They have shown us tonight that the night only has guts and glory to offer, and probably a few snapped vertebrae and black eyes. 4/5

Harkening to those present to come closer, the crowd gradually builds for UK neckbreakers Malevolence. The last time I saw these guys was at the Unleashed 2 Festival in Fibber Magees, just off O’Connell street. They killed there, and they killed here. The pit starts almost immediately, but they lean towards more headbanging metal than pit mayhem for most of their gig. An awesome, awesome band, with plenty of low-tuned drudgy riffs sprinkled with catchy guitar licks amongst the madness. If their set was ever played at a college house party, the house would get trashed. And I mean proper, proper trashed. I’m talking couches out through windows, doors being used as surfboards down the stairs, carpets being nailed to the ceiling as hammocks… but that’s enough about my college days! 4/5

A heavy hitter is among us. One that hits so hard it makes barnyard animals turn tricks to save themselves from slaughter. I am talking, of course, about Goatwhore. Clad in forearm guards with more spikes than Count Grishnackh (Varg Vikernes from “Burzum” and “Mayhem”, for all you kids out there who don’t remember him), they look every piece the outlandish metal fiends that they describe themselves to be with a name like Goatwhore. It’s fast, it’s heavy, and it’s good. As they play, I am especially impressed by the way they are able to change the rhythm of any song they play at the drop of a hat. It’s really cool – they still keep the momentum of the beat in the song, but alter it so that it sounds completely different. It’s slight, but noticeable, and a t the same time bit enough to change the flow of the song. It’s an amazing thing to see. Especially during “Fucked by Satan“.

The lads play a selection of new songs from the recently released “Constrictig Rage of the Merciless” (Metal Blade Records). They are a very, very tight band and totally committed to their job of playing for the headline act. Their last song is dedicated to Judas Priest in 1984, entitled “Apocalyptic Havoc”. Havoc indeed ensues as they close their part of the performance. The show that Goatwhore played

could have easily been a headline act, the enthusiasm to the fans, the stage lighting and the sheer immensity of the music and solos and drumming on top of it make this band a fierce competitor in the realm of the underground metal scene. 3.5/5

But the king of the ring (so to speak), is Dying Fetus. In all my days, of all the myriad of countless bands, both famous and not so famous, this has to be one of the most physically voracious gigs I’ve ever seen (the promoters were prepared for it, with a first aid guy on-hand in case anyone got bust open, as I’ve seen in the past). From start to finish, the action didn’t stop. Bodies flew from end of the fucking room to the other for 2 hours. This is where you really know that people look out for each other. Incessant whirlpools of bodies greet every song played, and naturally, a few falter along the way, only to be picked up quick-smart, and told to “get moving – you’re slowing the pit”!

The physicality of DF and their fans reminds you that metal is forever evolving. Now before you say anything like Deicide or Cannibal Corpse, just think back before those bands started. There was Sabbath, Diamond Head, etc.. This was before the thrash movement, which really brought metal to the world’s ears. Moving forward, you have the many different metal genres. There’s too many to list competently. Not so, when you hear DF. You can pull out just how far the metal evolution has really come in the last ten to fifteen years. It’s a phenomenon that very few music segregation’s can state and still stay mainstream. Let’s one thing clear, DF are not mainstream. They’re about as underground as you can get and the following matches.

It’s a great sign as I look around and see so many youngsters getting into the more extreme metal scene. These see the kids that will take the Neil Armstrong steps and boldly go where no one has gone before, and they’re gonna do it with a guitar. When I’m 50 and no longer able to enjoy a pit without fear of breaking a hip from not getting out if the way on time, the kids around me will have drawn inspiration from this scene and made the next stage their own. There’s no need for any theatrics onstage, no dead foetuses or any of that shit, just pure metal.

So let’s talk about the band. The drumkit, powered by Trey Williams kick through you faster than an AK47, guitarist John Gallagher and bassist Sean Beasleyshare vocal duties and both sound like they’re drowning in pools of blood. When you hear a recorded version a DF song you, would be forgiven for thinking that they use effects on their voice. Not true. The guttural lyricism comes from the depths of hell itself. When they both speak, they are soft spoken and I get the feeling they are all very chilled out dudes. There is no understating this: every guy in this band knows every sound his instrument can make at every second of every song, and does it superfluously, without looking. I look upon them and wonder how the hell they make this look so easy. The aggression that they exhibit in their songs would leave little other than peace in their hearts.

At times there are parts of tunes that are a little hard to follow, but the band is in total sync with each other. They have masterful timing, every one of them. It’s such a pleasure to hear the other side of extreme metal in that a discombobulated song structure can be communicated by more than one person and executed in such a way that it evokes a response in people who pay money to lose their shit in a controlled environment, but in an uncontrollable manner. Therapy, baby! No matter whom you are or what you do, you need an outlet for anger because at the end of the day, everyone is human. Aggression is naturally a trait of the uncontrollable. Ask Bruce Banner! Big shout out to Nathan Ryan, the lucky bastard who jumped higher than I did at the end who kindly let me photo the setlist. Ladies, form an orderly queue… There’s a dude who looks after his own.

Ears ringing, sweat drenched, thirsty and tired, we bid adieu to the Voodoo lounge once again. Yet another blistering evening of skull-melting metal from afar. The heads will be hurting in the morning, as necks and shoulders seize up from the pounding they received for little over 4 continuous hours of music. This wasn’t a metal night where you’d go to see a Metallica tribute band or something, where everyone knows the words. This was Fallujah, Malevolence, Goatwhore and Dying Fetus. You better be into your metal if you want to last the night here, despite what people may say to you when they hear these names. 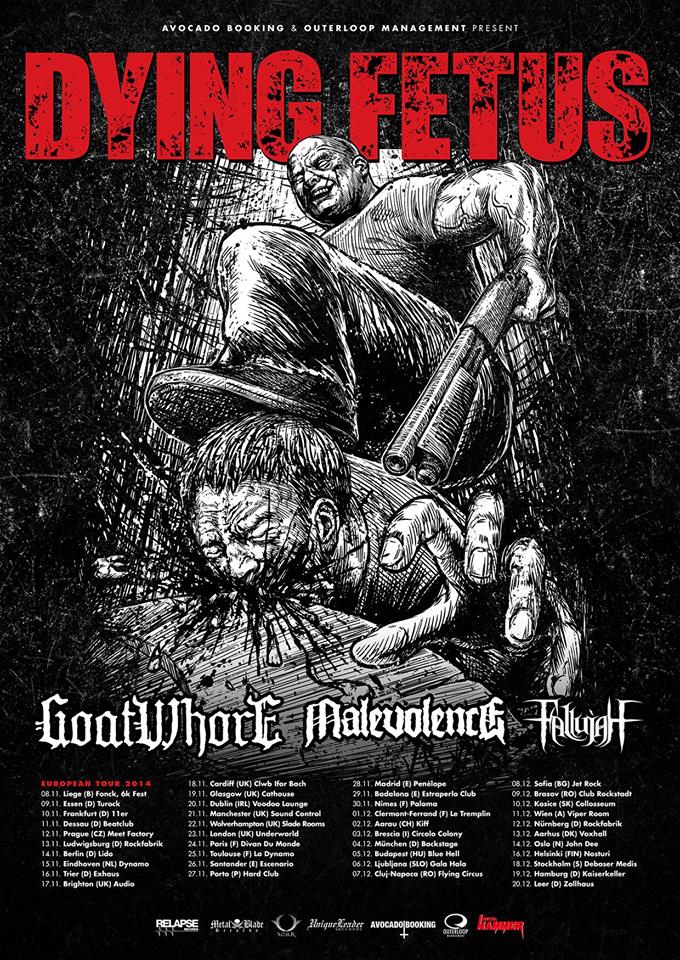 One Shot, One Kill

From Womb to Waste

Raped on the Altar

Subjected to a Beating

Pissing in the Mainstream

Kill Your Mother/Rape Your Dog

Your Treachery Will Die With You