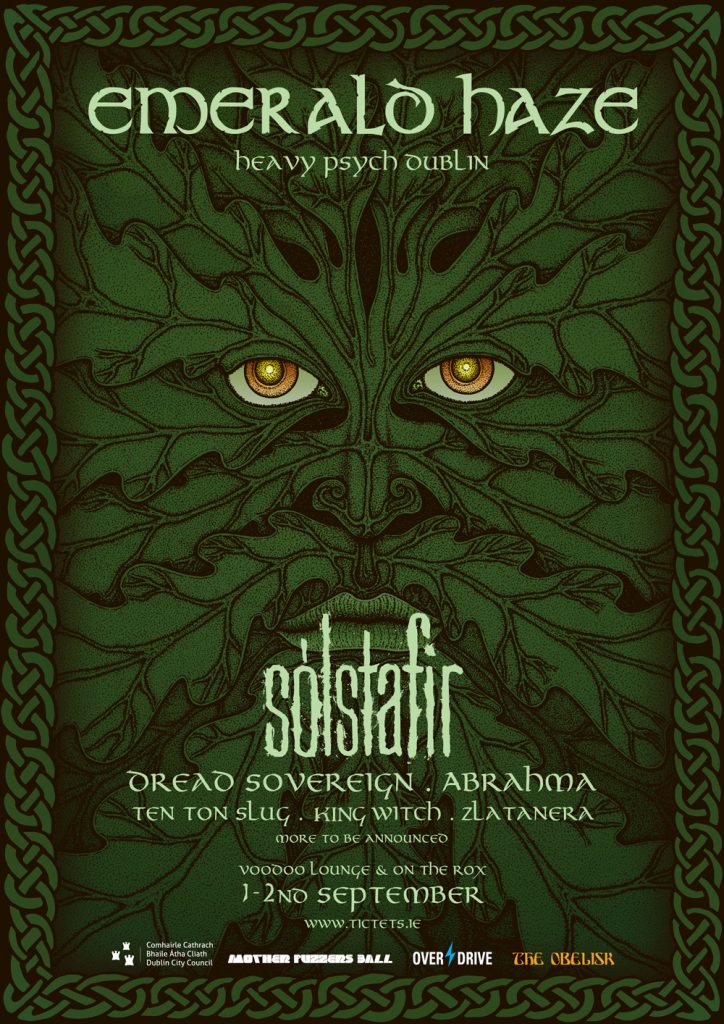 EMERALD HAZE takes place on Friday 1st and Saturday 2nd September 2017 over two adjacent venues – Smithfield’s Voodoo Lounge and On The Rox. Performers will be a mix of Irish and international headline acts, alongside established and emerging talent from Ireland and abroad. EMERALD HAZE is a not-for-profit venture, supported by Dublin City Council.

SÓLSTAFÍR’s unique blend of metal with beautiful melodies, psychedelic moments and a strong undercurrent of hard/classic rock comes as varied and at times appealingly bizarre as the landscapes of their native Iceland. Their latest album “Berdreyminn” was released through Seasons of Mist on May 26th, 2017 and a European tour in support of the album begins on June 10th at Download, Paris.

“Berdreyminn is a work of staggering depth, tapping into an ethereal netherworld of droney guitars, mournful piano-driven dirges and prismatic crescendos that converge beyond the five bodily senses.”Metal Hammer.

Irish acts Dread Sovereign and Ten Ton Slug, France’s Abrahma, Scotland’s King Witch and Northern Ireland’s Zlatanera are among the first names confirmed to appear, with more Irish and international acts to be announced in the coming weeks.

More about heavy psych in Ireland
Heavy psych is a phrase used to encompass a wide range of related styles. From its origins in the 1960s, when the likes of Black Sabbath and Led Zeppelin turned their amplifiers up and started playing a louder form of blues rock, heavy music has spawned a vast succession of subgenres. These range from easily-accessible hard rock bands to heavier mainstream acts and beyond into more underground realms. Heavy psych draws from a number of these: Desert rock, fuzz rock, shoegaze, doom, and sludge, as well as from jazz’s freeform jamming and much more.

As with the rest of Europe, there has been a rise in popularity of heavy psych in Ireland over the last ten to fifteen years. However, while bands from mainland Europe have been supported by a network of interlinked scenes, Ireland’s geographic isolation from this network and that of the UK makes it more difficult for Irish bands to thrive.

After a decade of hard work, Northern Ireland’s Slomatics are finally gaining widespread international recognition, having played at a number of festivals in Europe over the last few years including Desertfest and Hellfest. They have just been announced as performers at both Roadburn and Psycho Las Vegas 2017; a huge achievement for an underground band from Ireland.

Groups like Electric Taurus, Ten Ton Slug, Dread Sovereign, No Spill Blood, Wild Rocket, Two Tales of Woe, zhOra and Zlatanera have played at festivals in the UK and Europe while other bands have begun to gain international recognition and critical acclaim including Soothsayer, Mother Mooch, Venus Sleeps and Elder Druid. All of this is drawing growing and continued interest to Ireland’s burgeoning underground as a crucial artistic movement taking place in real-time. 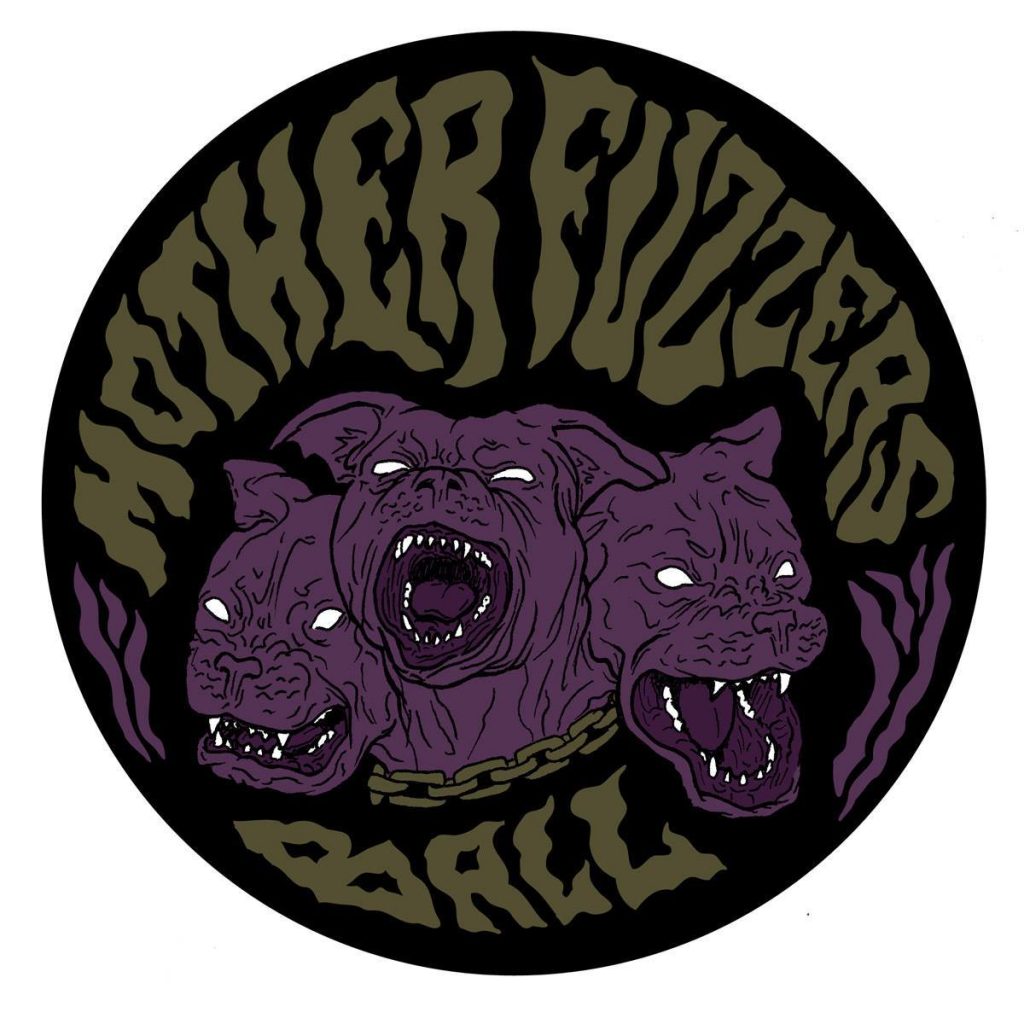 The Mother Fuzzers Ball Stage has been an integral and very successful aspect to CANALAPHONIC Music & Culture Festival since its inception in 2015. EMERALD HAZE creates an opportunity to further develop and nurture Ireland’s contributions to the worldwide aesthetic of heavy psychedelia, draw international attention to the high quality and quantity of acts emerging around the country and provide festival experience to these bands. 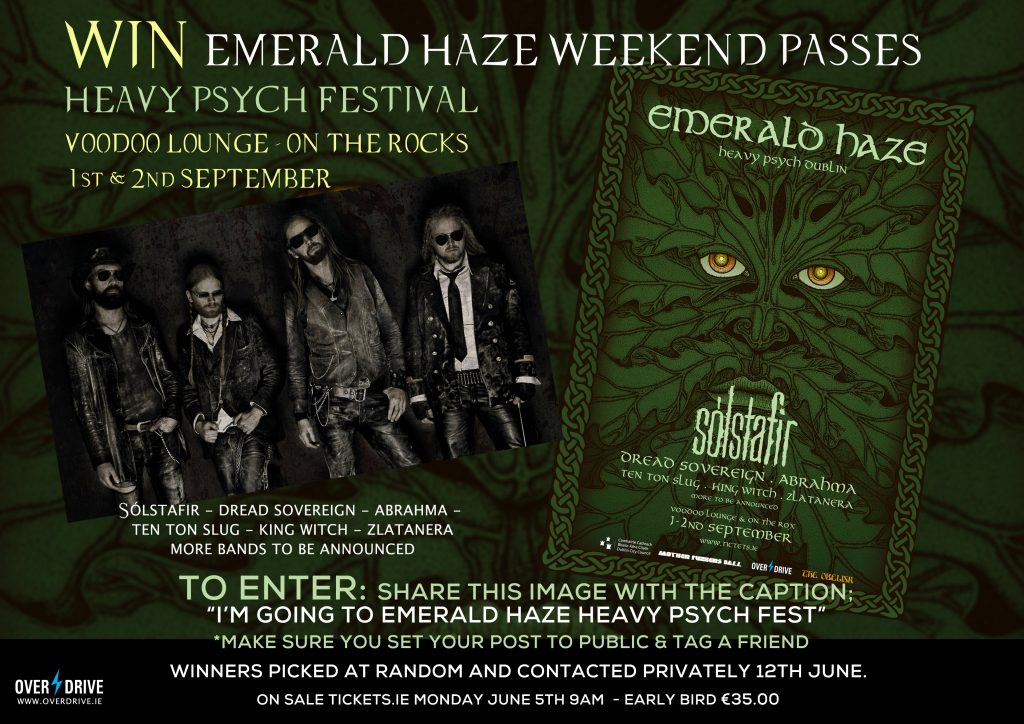