Enslaved’s new studio album Utgard was recently released into the world, the concept of which explores the esoteric place in Norse mythology that celebrates the rebirth of the individual – a place where one goes for the unification of that which is above and that which lies below.

A reckoning of dark and light, of night and day.

In continued celebration of Utgard’s release, tied in with the upcoming Winter Solstice (a Pagan holy day marking the symbolic death and rebirth of the Sun), the band are proud to announce a Winter Solstice streaming event for Saturday 19th December via the Revolver Magazine Facebook page, which will be followed by a live Q&A with some band members.

The digital event will feature all three parts of Enslaved’s recent Cinematic Summer Tour, the revered filmed performances titled; ‘Chronicles of the Northbound‘, ‘Below the Lights‘ and ‘Utgard the Journey Within‘.

The performances will be presented by Revolver Magazine and will be repeated the next day Sunday 20th December on the Enslaved YouTube channel.

The events are also collaborations with respected European festivals Roadburn, Beyond The Gates and Summer Breeze. 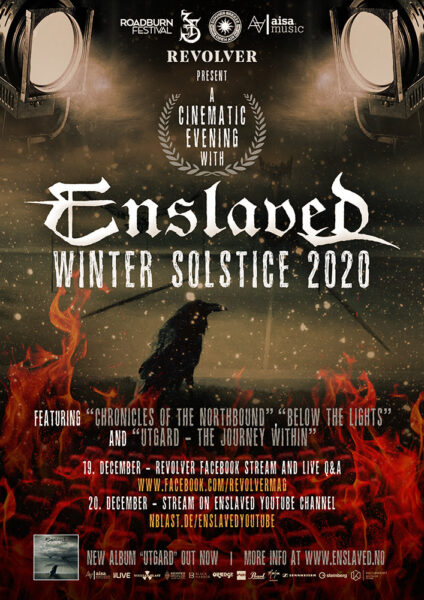