EXCLUSIVE INTERVIEW – PLEYMO; “WE JUST WANTED TO STOP WHILE WE WERE ON TOP” – Mark Maggiori


Formed in Fountainbleu, France, in 1997, Pleymo is France’s best-kept secret, having released 4 studio albums, selling over 100,000 copies and a live DVD. Last month, Overdrive spoke with Mark Maggiori and BenoítJulliard in their native Paris on the first date of their reunion tour. 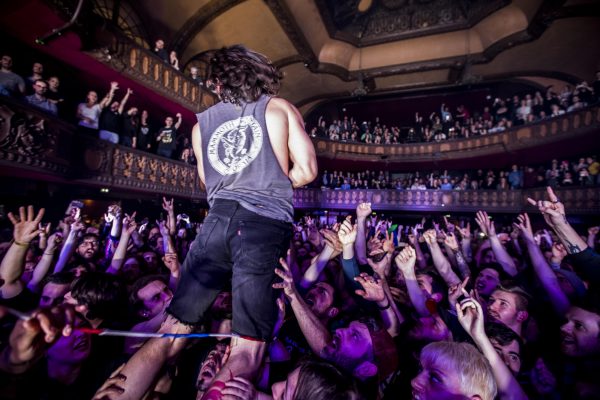 Pleymo have performed all over the world, numerous times, until the last concert date in support of their fourth album “Alphabet Prison” back in 2007 when they suddenly and very unexpectedly announced they would be taking an indefinite hiatus.

Fast forward 10 years and Pleymo announced a reunion concert, celebrating 20 years since their formation. Overdrive sat down with singer Mark Maggiori and bassist Benoît Julliard backstage at Le Trianon in Paris on March 23rd, this was the first date the band announced, and it sold out in one day which prompted the band to then announce a full reunion tour.We met up to talk all things Pleymo past, present and possibly future.

Mark: It’s pretty good, pretty intense, we were very surprised by how emotional everybody is, I mean especially the crowd, everybody’s coming with lots of memories, and they want to share this moment altogether.

OD – You did 5 shows before this one today, how did they go?

MARK – They were pretty incredible.

MARK –  Yeah, I mean it was intense for sure, it was full, pretty packed every night, and tonight’s going to be pretty sick I think,

BENOÍT – It’s cool because the audience got bigger, older (laughter), now they’re 30/35 years old something like that, so we get a lot of energy from the audience.

OD – This show is the first you announced, it sold out really quickly, how did that feel?

BENOÍT – It was surprising, I remember watching my phone when we posted it, and it kept beeping, the phone was moving along the table.

MARK – That was a bet, I mean we had no idea, the booker was kind of trying it out.

OD – Were you testing the water to see what the reaction would be off the back of the first show?

MARK –  Exactly, and as soon as that happened, we were like let’s plan a tour! More dates!

OD –  Was it always the plan to come back, 20 years after you started?

BENOÍT – We’ve been thinking about this for like 10 years we used to see each other every year or two, and we didn’t plan anything but we were always thinking about it since 4 years ago, the idea was always there but we didn’t have the motivation for it. 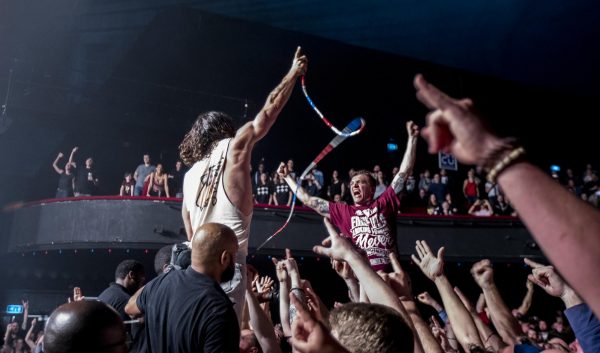 OD –  Twenty years is a nice, round number to take things back to the live stage.

MARK – Yeah, we didn’t want to do new albums, we tried about 3 years ago to spend 10 days in a house trying to make some sound, but Davy (Portela) was missing and it wasn’t the same, so we decided this was what we wanted, so we said fuck it lets do it.

OD – What was the first rehearsal like getting back in?

MARK – It was pretty amazing, I remember it was early September the first time I came, they were already working for 3 days and I just jumped in and took the microphone and we all looked at each other and said that sounds like Pleymo. We were surprised, it’s like riding a bike, you just get back on it and away you go!

OD – It must be cool I mean there’s no pressure behind it, it not like you’re thinking we have to write songs for an album, it’s just playing,

MARK – Yeah I mean the pressure of sounding big, we didn’t want to be seen on stage and be like these poor guys, they should have stayed home.

BENOÍT – We also didn’t want to change the image that people might have form the past, it’s a nice souvenir, we didn’t want to ruin the whole thing, and it seems that’s it working.

BENOÍT – The energy of the shows, I kept on doing some music, the first band I did was, for first few years ok, there was some energy, the other bands back then were more into music than energy; I missed the big riffs and songs.

OD – So what did you guys get up to during the break?

MARK – Many different things, Ben’s been doing his own thing, playing music and graphic design, Erik is also doing graphic design, Davy is doing guitar classes, Frank has a production company, Fred is working in high schools taking care of students and still drumming and I’m a painter, like fine art.

OD – Is there any era or album period that you have the best memories from?

BENOÍT – Every album was different, they were all adventures, we had this impression all those years that it was always one more step, it was becoming bigger and bigger, so everyone album we changed.

MARK – It was very tough to just stop what we were doing, it was a decision we made, we didn’t have to stop, lots of bands stop because they have to, or because it’s not working anymore.

OD – You see that quite a bit. Loads of bands imploding all the time.

MARK – Exactly, and we just wanted to stop when we were on top, and close the book when it was pretty good and have that image of the band.

BENOÍT – It’s like what Soundgarden did that time; it was good that they took their break when they did when they were still big.

BENOÍT – Maybe the last minutes of the last show we played together.

OD – Did you know it was the last one?

BENOÍT – We did, we got out of the concert and were in the dressing room backstage in Budapest and the 10 minutes we spent at that moment were silent. We were all just thinking “what are we going to do now” and “why are we stopping this”, like why, what, who, when, maybe that was the most emotional moment of the group.

MARK – I think I cried then.

OD – There’s nothing wrong with that. How different was it beginning as a musician to how it is now?

MARK – It was a long journey, we each have our own view of that, some members of the band are more musicians than others, I don’t consider myself a musician, I’ve been around music my whole life, but I’m not doing it on an everyday basis.

You can be pretty naïve at the start and making mistakes because you don’t know shit, but you fucking make some genius stuff because it’s just coming out like right now we’ve been around the block so we know something different, you still do something great but it’s more thoughtful.

OD – How many of you have had kids since ye took the break?

BENOÍT – Half the band, just Fred and Erik don’t have kids.

OD – It must be really weird, them seeing you on stage, instead of in a video.

MARK – My daughter’s coming tonight, I just can’t wait, what the hell are they going to think in their little heads?

BENOÍT – My kids discovered our music a few months ago, I knew I was coming back to play so they knew I had a band, they saw maybe 1 or 2 videos, and they really liked it, my little boy goes crazy, he’s a metal head when it’s playing,

OD – Have they any interest in playing music?

BENOÍT – My son’s only 4 at the minute; my kids have a keyboard and percussion and want to play the instruments I use, but for now, nothing serious.

OD – I bought the new compilation vinyl you released, it’s really good. Although it was a label release, did the band have a say in the track listing? 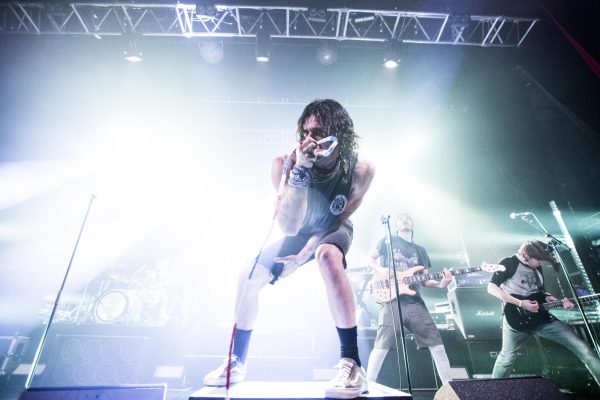 OD – It must have been a hard choice to go through all of that material and only pick out a certain amount of tracks from the bands legacy?

BENOÍT – We wanted to put all the albums on it the same way, so we did 4 sides, 4 albums, so that was the first thing and second we wanted to make it as close to the setlist we’d be playing live, maybe 2 or 3 exceptions.

OD – Was it difficult to pick one song over another, and get the 6 of you to agree to each song?

BENOÍT – I think it’s a case of liking one thing more than another, but for choosing the songs it was easier than choosing the setlist.

MARK – The set list was defiantly hard, trying to choose what people would expect but also what we wanted to play, there are a couple of songs we don’t play that maybe part of the audience was waiting for.

OD – Are there any songs you missed playing during the break?

BENOÍT – Yeah, maybe “Blockout”, from the last album, I miss this song as it has a different kind of energy from the other tracks we normally play.

OD – Most of our readers wouldn’t be familiar with your work, so where would be a good place for them to start?

BENOÍT – Maybe the beginning, on the first album there’s a song, “Nawak” and I think that song is the song that says this is Pleymo, and that’s the reference for all other songs, you hear parts in later songs.

OD –  I saw you guys are playing Hellfest this summer, with some awesome bands what are your expectations for that? 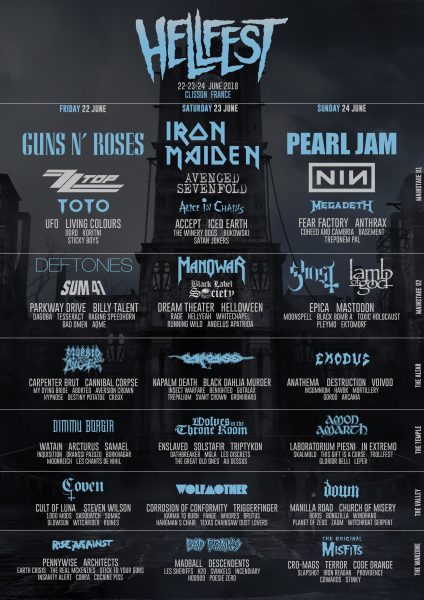 BENOÍT – Maybe the biggest Braveheart (wall of death) ever I think it’s got to be huge, this festival didn’t exist when we last played but now everyone is going, it’s becoming the biggest thing in Europe, we’re playing the main stage Saturday at 6 pm, it’s going to be the climax of our tour.

I want everyone to have plenty of positive energy when they come to see us! I think it’s going to be such a cool gig. One of the curators of the festival came to see us in Nantes and he’s not into this kind of scene and likes hard-core music a little more, and he really enjoyed the show and told us we’ll have a good time.

MARK –  I just can’t wait, I think it going to be a hell of a Fest, it’s going to be awesome dude, we interact with the crowd, I think that’s something we do well, and I think we’ll be able to bring the crowd to a high level.

OD –  So, I’ve just got to ask, will there be any new material coming out after these Summer dates?

MARK – I’ll be going back to Arizona after the tour, but we’ll see what happens.  This tour was a lot for all us all with regards to getting time away from our daily lives and family, so we’ll just have to regroup and see where we’re all at later in the year and especially what the natural feelings are about either hanging it all up or giving it another bash.

For more information on Pleymo, please visit this link. 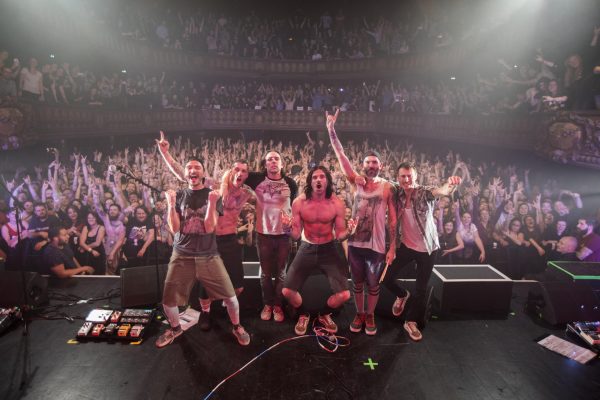