Bay Area Thrash legends EXODUS will be taking the stage in Dublin’s Button Factory on Monday 12th August. Tickets are selling fast so get your hands on a pair before they sell out!

The veteran San Francisco Bay Area thrashers are currently writing material for a new studio album, to be released in 2014.

EXODUS will headline the Button Factory as part of a tour of 17 European cities, with stops in Barcelona, London and more. Although SLAYER is currently tapping the talents of guitarist Gary Holt for their European tour, Holt is confirmed to perform at select EXODUS dates. When Holt is not performing with EXODUS, HEATHEN guitarist Kragen Lum will fill in on guitar.

EXODUS recently revealed two brand new, exclusive t-shirt designs, available now only via their official merch store at this location. The new designs, “Only Death Decides” and “Horned Skull”, come with a free sticker (with mail order only).

EXODUS’ latest album, “Exhibit B: The Human Condition”, was released in North America on May 18, 2010 via Nuclear Blast Records.

The CD sold around 4,600 copies in the United States in its first week of release to debut at position No. 114 on The Billboard 200 chart.

EXODUS’ previous album, “The Atrocity Exhibition: Exhibit A”, opened with 3,600 units back in October 2007.

For more information on this show and more events by DME Promotions, just hit up the link. 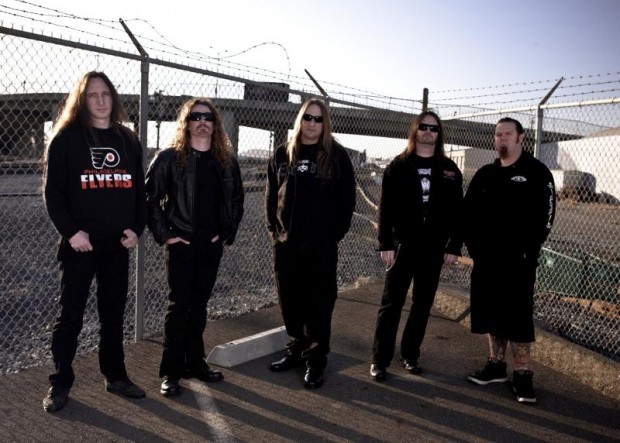