It’s not every day that UK Hardcore representatives approach the Extreme Metal world with the intention of causing some irreversible aural brutality to the level that BORSTAL can command. 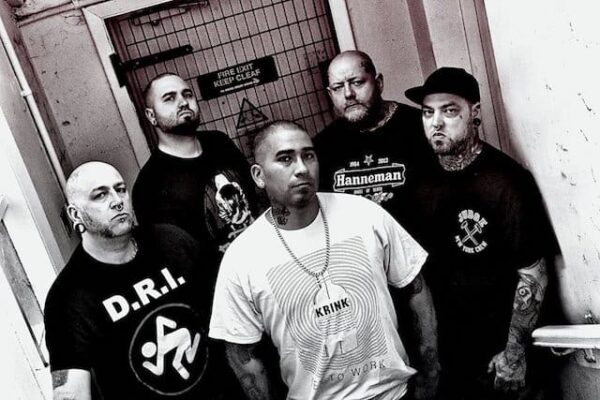 Former Dimmu Borgir/Cradle of Filth/Lock Up and current Brujeria stickman, Nick Barker gives Overdrive the lowdown on one of the years most anticipated collaborations…

OD – Talk us through the timeline of how you got together with the guys and decided that you were gonna do this for real, as you’d been officially formed back in late 2019 after Lee Kitchener [Dripback] and Wez4 [Dripback] approached you with the idea?

BARKER – It really all came together at the beginning of 2020. I’ve wanted to do something like this for years and wanted to come out of the pigeon hole of the “Extreme Metal Drummer” association and just get stuck in!

I’ve really loved a lot of Hardcore and Punk stuff over the years with most of my mates wearing the t-shirts from back in the day. That’s actually how I found out about a lot of the bands that I really enjoy from those genres.

So, I really wanted to do this for a long time and had in fact, approached a number of people in the past and for one reason or another, it just never came to be. By late 2019/early 2020, I mentioned it to Lee and Wez and they jumped on it immediately and started sending me riffs and ideas etc.

We first got together in January 2020; right before the pandemic took hold. 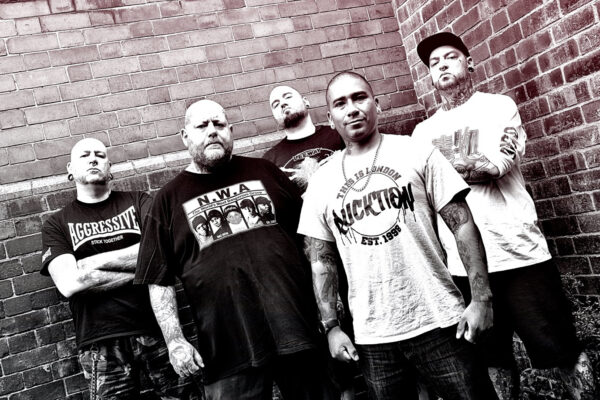 OD – Did you have a good set of ideas and song structures by that point?

BARKER – Well… yeah we had some stuff. It’s not rocket science [laughing] so we just tore into the stuff we had and it came together really naturally and quickly which was very surprising to all of us.

OD – When you entered Monolith Studios last September was it a case that you had all the tracks locked down, or was there a freestyle/creative element to the sessions?

BARKER – By the time we booked into the studio, we had a set game plan of doing five originals and one cover for the EP.

Piere [Mendivil vocals – Knuckledust] did a few tweaks with the lyrics etc and we just got it going. Our good friend, Charlie ‘Squid Commander’ Wilson [producer] had some ideas that he suggested which we considered but we were pretty much ready from the get-go. We’re really happy with the way it all turned out considering the circumstances of the looming pandemic.

OD – The impact of the pandemic has provided many people with the time to do things that they may not have had under normal circumstances, in hindsight, looking at your own schedule prior to the lockdown restrictions, would you have ever had the time to get this EP completed?

BARKER – Yeah, because back when I was talking to Lee and Wez it was before Covid really hit and we were already planning things. The only thing that really changed was we didn’t anticipate exactly how quickly we’d have the product out. It still would have happened. BORSTAL is a serious band and we have long term plans looking ahead.

OD – Are there plans for a full-length Borstal album?

BARKER – Yes! Our plan was to get the EP done and then shop around to see can we get a deal on the album. The album is sounding very strong. We’re gonna release a limited 7″ to bridge the gap between the EP and the album. This also fits in with the DIY approach to the whole hardcore scene.

The 7″ will have three new tracks on it. All original material.

BARKER – We’re booked into the studio with Russ Russell [Napalm Death, Dimmu Borgir, At the Gates, The Wildhearts, The Exploited, Evil] in July so, I’d say the 7″ will be available around September/October. Then as soon as I have hard copies in my hand I’ll be shopping that to a few labels to carry the album.

OD – Will any of the material on the EP or the 7″ appear on the forthcoming album or will that be all brand new material?

BARKER  – Yes! It’s all-new music. We might re-record one of the EP tracks down the line but for now, we’re very much concentrating on writing this album. We’re in full creative mode at the moment.

OD – When things return to normal and things start to open up again, will you and the rest of the guys have the time to tour this EP, or will it be a case of jumping right back into the work schedule with the other projects you’re all involved with?

BARKER – Absolutely! We are committed to touring as much as possible doing as many shows as we can and hopefully some festival dates. We actually just signed up with Route One, which is Ben Ward’s [Orange Goblin] new booking agency and he’s really excited.

Ben actually said that one of the really exciting things about what we’re doing is that we’re crossing over into Punk and Metal territory so we can play to both audiences which of course, opens up a lot of potential festivals also.

OD –  Of course, there is the cover of The Last Resort’s, “King Of The Jungle’ featuring Lee’s Dad, [Arthur Kitchener], was that something that just happened as a spur of the moment kind of thing, or was it planned in advance?

BARKER – Well, because of the timeline involved with the limited time we had thanks to the pandemic. We decided to do six tracks and one cover, otherwise, we would have had to spend more time and that would have disrupted the plans for this release.

Wez4 lives in Sweden and that can be a bit difficult. So when we can all be working together we really work hard because we don’t have the luxury of just meeting up whenever we like. It was actually Lee how suggested doing the cover. He said; “Why don’t we do one of my Old Man’s tracks?“, and it just happened very suddenly from that point.

It all made sense to us because we wouldn’t need clearance because he [Arthur] wrote the song and it’s a nice tip of the hat to the ‘Oi’ scene. A lot of Hardcore fans have a lot of time for The Last Resort, so it was a no-brainer to do the track.

OD – You’ve wanted to do this for so long now and finally it’s become a reality with the EP due for release on April 1st. Do you find that nowadays, it’s far easier to cross-pollinate genres as back in the day, most genres stayed within their boundaries?

BARKER – I know what you’re saying and yeah, things are more relaxed these days. To me, good music is just good music is doesn’t matter what fucking genre it is. I could put on ABBA and then some Angel Corpse and it’s just all good music to me. 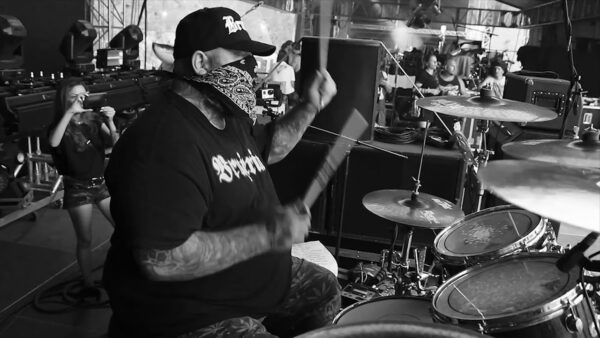 I remember back about twenty years ago when the Black Metal explosion erupted and it was all this ‘Anti-Death Metal‘ and ‘Anti-Thrash Metal‘. With the “No Moshing” etc now you get Black and Death metal bands crossing over and I personally love that crossover style.

OD – Are you still in touch with the guys from Lock Up?

BARKER – Yeah, there’s no bad blood whatsoever. I just wanted to move on. It had been twenty years for me. I got a call from Shane [Embry, Napalm Death] and he asked me if I minded himself and Anton [Reisenegger, Criminal vocalist] carrying on and I was more than happy to see them continue.

They respected and understood my decision to step out and a good friend of mine, Adam Jarvis [Pig Distroyer] is now drumming for them and he’s a fantastic drummer and hopefully, they’ve gone from strength to strength and I’m really looking forward to hearing the new album. 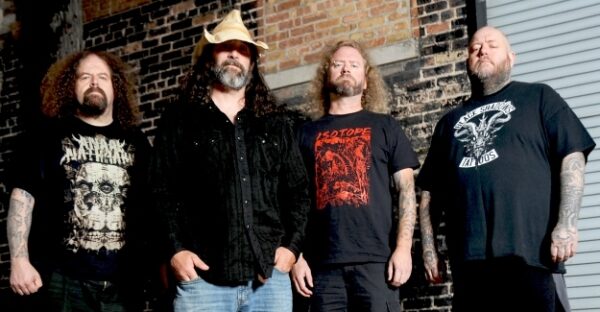 I understand Tompa Lindberg [At The Gates] is back, so they have two vocalists. There were talking about that idea when I was in the band so, to see that come to fruition, is really great and I’m very happy to see the band carrying on. There’s no bad blood between us at all. We’ve been brothers for almost 25-years! I really wanted to do something different and it opened up some free time for me to concentrate on BORSTAL.

OD – Do you have any other projects that you’re working on besides Brujeria?

BARKER – Yeah, I have  ‘Twilight of The Gods‘ which is with Alan [Avril] from Primordial, Rune Eriksen (AURA NOIR, ex-AVA INFERI, ex-MAYHEM) and it’s a kind of straight forward Heavy Metal project that pays tribute to the old school classics like Rainbow, Iron Maiden etc. The type of shit the Germans love. [Laughing] Get your drinking horns in the air! Fist-pumping, old-school proper Metal!

OD – As far as the Brujeria can you give me an update as to where things are with reference to new music etc?

BARKER – Well, yes the album is currently being mixed and that should be ready for release by the end of the year. I’ve got plenty of irons in the fire, but because of this fucking pandemic. So, I can’t wait to get back out and tour this stuff!

OD – Your love for hardcore has finally been honoured with BORSTAL, do you have any other bucket-list projects or collaborations you’d like to do in the near future?

OD –  Do you think that extreme music is still [as a whole] overlooked by the industry or do you feel that it exists where it should be?

BARKER – I think it’s become slightly oversaturated, especially Death Metal. There’s an element where it’s all beginning to sound the same. Thirty years ago it was all about the ‘riffs‘ and now, thirty years later, it’s all about how fast the BPM is on the track. It’s not about the riffs anymore; it’s about the typewriter.

It’s a real shame that Death Metal has gone that way. I’m old-school in thinking the best Death Metal was ‘Alters of Madness‘ [Morbid Angel], ‘Slowly We Rot‘ [Obituary]… Possessed, Death etc. Those bands were all about the riffs rather than just what it had become now. There’s very little artistic merit these days. It’s almost become soulless.

I mean…that’s just Death Metal. It’s a generational thing also. People don’t want to pay for music anymore, they expect it for free. It’s lost some of its credibility and the artist that are creating this music, are not getting the respect they deserve. Also, the attention span of people these days is a lot shorter. To be honest, I don’t follow it anymore and am very much out of touch. [Laughing]

The good bands will always withstand the others will just be forgotten about.

OD – The most underrated HC band in your opinion is?

BARKER – Hmm.. I would have to say Mob47 from Sweden. They are a great band and totally worth checking out for anyone that’s interested in solid Hardcore.

‘At Her Majesty’s Pleasure‘ is out now.

Tracklisting:
1.Refuse To Lose
2.Karma
3.We Stand As One
4.Vicious Circles
5.Worm Food
6.King Of The Jungle

Order your copy of the EP via this link and avail of the many limited edition vinyl pressings, along with merch and pre-order bundles. 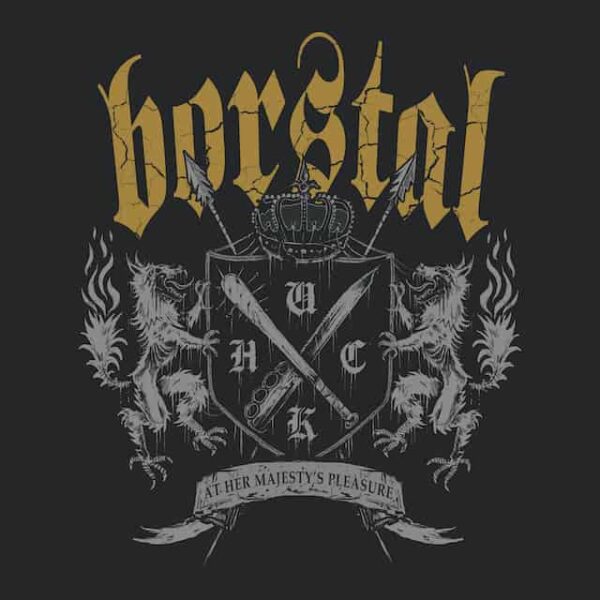