Hybrid Rock/Progressive/Alternative Welsh natives, HOLDING ABSENCE finally release their sophomore studio album today [April 16th]. Frontman Lucas Woodland sat down with Overdrive to talk about the impact of Covid on the bands’ original plans as well as line up changes and much more… 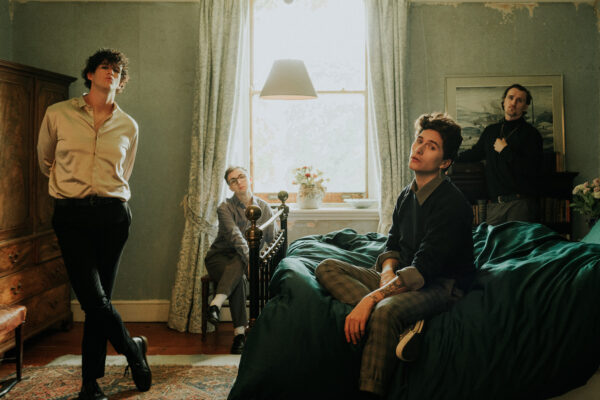 Gliding between the genres has always been a tricky endeavour for any band, however Cardiff natives, Holding Absence have gained considerable notoriety thanks to their ability to fuse elements of Alternative, Rock, Metal with moments of Progressive songwriting here and there.

Considering their self-titled debut was only released in 2019, the bands’ popularity has seen an impressive rise with growing interest not only in the UK and EU but also from curious lovers of post-hardcore and progressive alternative scenes in America.

Singer and driving force behind Holding Absence, Lucas Woodland tells us about the journey between their debut to the present day and their plans for album number three!

OD – First off, talk me through the title of the album as I know it’s based primarily on the concept of hindsight, regret etc. I believe that this is loosely inspired by your own family. Did you find the overall process to be a very emotionally raw experience?

WOODLAND – We’ve been a band for four years now and over the last few years I’ve really got to grips with who I am as a songwriter. I’ve always been very honest with myself and I believe that I express that honesty with my music also. To me, it’s just a natural way of doing things and a bonus with being honest is that people can relate to the music and the lyrics more.

This album feels like there’s more of my inner personality than anything else I’ve done in the past. I really felt more ready to open myself up with this album.

OD – The self-titled debut was only released in 2019, so in terms of the average timeline in the industry these days, this a pretty quick follow-up. Was it a case of the album just came together really quickly, or were some of these songs from around the writing period of the first album?

WOODLAND – When I look back on the debut, I really feel like it was a hard experience. We’ve had a lineup change and issues with production and lots of issues and hiccups and the final straw came when we were all set to do some shows in America and two weeks prior to the flights, our visas got cancelled…which was a huge blow for us.

It really made us realist that we were ready to just crack on with album number two instead of just feeling sorry for ourselves. We just jumped headfirst into it. [Laughing]

OD – The way the tracks tie together suggests that there is a linking concept or running story of sorts, is that correct?

WOODLAND – [Laughing] Yeah, it’s a bit of a poisoned chalice to say it’s a “concept album” but I feel like everything that we do is…we’re such an album band. Like everything kind of has to be obsessively moulded together for us.

It’s not a concept album but there is a current theme that runs through it. Also a couple of tracks ‘Celebration Song‘ and ‘Mourning Song‘, both deal with the concept of death and learning from it, but looking through different lenses if you know what I mean. Those tracks are both bookmark ends to the album also.

We want people to listen to the whole album almost like a concrete block. It’s one body of work that is linked and intertwined with each song. It’s not like you can just drop in and listen to one song, it’s the overall experience of the entire length and breadth of the LP. It’s about convincing people that this album can’t be shuffled, or picked at.

OD – There is no doubt that ‘The Greatest Mistake of My Life’ is a deeply personal album but also an album that explores some pretty complex human emotions. Was there ever a fear that you would not have been able to translate this grand idea to the level you wanted?

WOODLAND – I think for me, as a person, let alone a musician, I’m a very creative person and I do believe that I’ve got to learn to live with myself and my decisions. I’ve done things that may not have been perfect but I don’t regret doing those things differently. It’s just something that I’ve come to grips with, as a human. That philosophy goes with my music also and I wouldn’t change a thing about this album; or anything else for that matter.

OD – I know the album was recorded before the grip of the pandemic, but has there been any new inspiration over the last year in lockdown?

WOODLAND – I feel like every band had a different relationship with Covid, like some bands have been on the road for decades and this has given them time to relax and do some other stuff in their life but for us, it was kind of weird because we were locked in a very deep process of writing new material and recording and then the Pandemic arrived and at first we were just trying to get our heads around what was happening.

Then we started to feel a little guilty because we weren’t writing new stuff, even though we had just written new stuff [Laughing]. But as it stands now, a full year after recording this album, we are actually writing new material, for what will become album number 3!

I think the confidence that we feel listening to ‘The Greatest Mistake...’ has really breathed a new sense of audacity into what we are doing and we’re already talking about track themes and stuff like that. So, despite the lockdown, we’re really doing the best we can to be as productive as possible.

OD – Die Alone (In Your Lovers Arms) features a guest vocalist, can you let us know who that was?

WOODLAND – That was actually my sister! There are people in life that are just great singers and sometimes for one reason or another their voice will never be heard the way it should be and I just wanted to make sure that her voice is heard.

I wrote this song as a duet and then we were like: “Okay should we make a big song and dance out of it and get a guest vocalist in for this part or just try and do something a little bit more special” so, we decided to do the latter and I’m so glad that’s what we decided to do.

OD – With James Joseph announcing his departure from the band back in July, was there any concerns about the status of the album, or was it a smooth transition?

WOODLAND – Well, it was a surprise to us all. James is actually in some of the videos for singles from this album so, as you can imagine it was kind of a sudden decision. To be honest, I view it as something that was inspired by Covid. He [James] was very much driven by the live aspect of this business. After a year of none of this happening, I guess he just turned his attention to other passions that he has in his life, as well as his own side project.

It was a very amicable separation and it doesn’t affect the release of the album in any way. 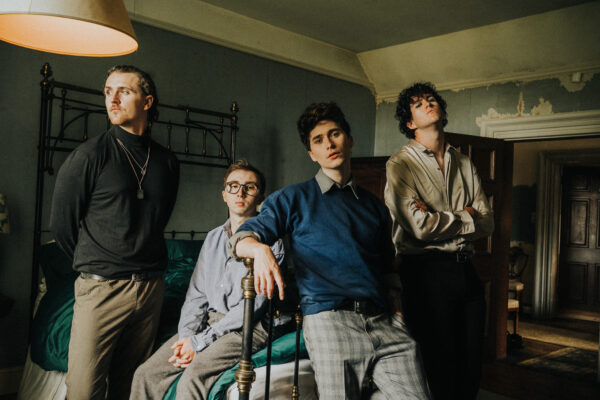 OD – I’ve tried to see if there was any information on who has replaced James but can’t find any info, is that something that you’re waiting to do when the pandemic lifts?

WOODLAND – Yeah, we have a new member in the and didn’t really want to make a huge thing about it. Our new bass player is a very old friend that Scott [Carey, guitars] and I have known since we were about 15-years old.

Everybody’s very much aware that the album is the important thing right now and he’ll be officially announced in due time.

OD – The year has been devastating for the entertainment industry, did you guys consider pushing back the album even further until the option of touring was on the table?

WOODLAND – We originally going to announce the album at Download Festival last year and release it in October. That feels like an eternity ago now [Laughing]!

With everything that’s happened, we just wanted people to hear the album and we figured that we’ll give a three month lead on it, which is a very long time to be sitting on a new album anyway.

Our plan was to then announced some live dates about three months afterwards, so upon announcing it back in October, our plan was to not tour it for at least six months and if everything was still terrible and we had to keep pushing shows back, then so be it. We just really felt that this was a good time to finally get the album out.

WOODLAND – It is a hearty mixture of both! As an artist, I’m listening to the music we’ve created and I’m so proud of what we’ve done, but on the other hand, I’m always striving to push the boundaries of what we’re doing. I think the lesson is to never be complacent with things and just keep trying to outdo what you’ve just done. There is literally no ceiling for music. I’m only 26-years old and I feel that I’ve still got so much to achieve.

OD – Given an unlimited budget for a show, where would you like to perform and who would be on the bill with you?

WOODLAND – To be honest, once you start playing Arenas and Stadiums, I’m sure it all starts to blend into the same thing [laughing]. Honestly, being Welsh, I’d have to say that I’d love to perform in Cardiff CIA. 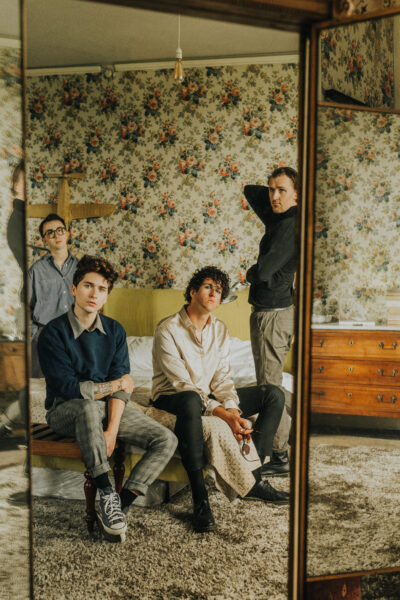 I’ve grown up going to shows there and ironically, one of the guys in Westlife is my distant cousin [Shane Filan] and I grew up watching them in that Arena and it always just stuck with me. I’d love to be on the bill with My Chemical Romance and have Thrice on there also. I love both of those bands.

OD – Has there been any bands’ over the last year or so, that you’ve discovered and can share with us?

WOODLAND – I haven’t really been listening to that much new stuff. I’ve actually been working on a comic book and I’ve just been drifting off to a lot of ambient and instrumental stuff and some hip-hop. Lot’s of Brian Eno stuff also.

OD – One of the most important albums in your life is…

WOODLAND – Ahhhh, well… I’d have to say ‘Songs About Jane‘ from Maroone Five and it’s just an album that I really love. I know it’s not cool to like them but I don’t care.

‘The Greatest Mistake of My Life‘ is out today via Sharptone Records. Grab your copy here. 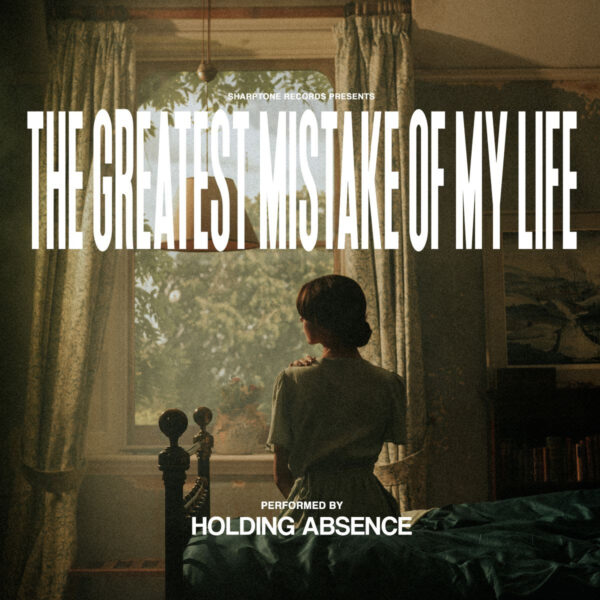