FEATURE INTERVIEW – IRIST “Our journey to where we are now has been a little bit unusual”.


If case you’ve been living under a rock these past few months, you may have not heard of one of the most talked-about new bands to impact the modern heavy music landscape. Let us introduce you to Atlanta, Georgia-base quintet, IRIST. 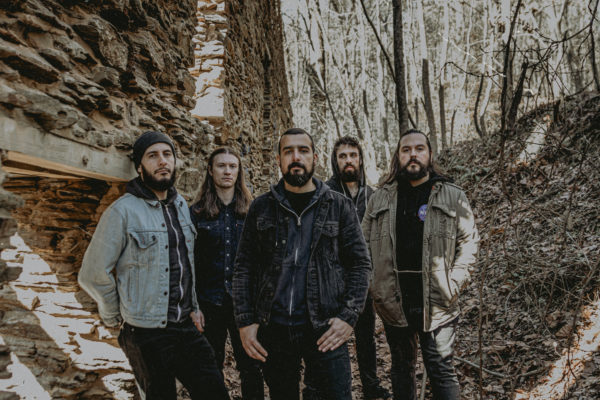 With a line up that combines members from Argentina, Chile and America, Nuclear Blast’s latest signing is promising to make a rather large dent in the metal spectrum and with good reason.

Their debut album ‘Order of the Mind’ has garnished glowing reviews from across the planet and continues to weave its way into the playlists and horizons of some of the most respected media outlets, influencing an impressive army of fans the world over.

We caught up with guitarist Pablo Davila to discuss the bands’ origin, the new album and their plans for the future…

OD – First off, let’s quickly talk about the bands’ history, as I know you’ve only been together for 5 years. But how did the members all come to find each other?

PABLO – I met Bruno (Segovia-Bass) first by responding to a musician ad that he had placed on Craigslist, so I joined his band and we’ve been making music together with the longest within the band. We have the most ‘history‘ together.

Over the years I met the other guys also through musician ads and Jason (Belisha-Drums) was the only guy that I met in another way. He put up a bunch of videos of himself playing covers of The Mars Volta tracks from The the Bedlam in Goliath (2008) and I saved it for a few years because I thought it was fucking awesome and when we started getting our demos together, I reached out to him and eventually he agreed to join the band and the rest is history.

OD – Before Rodrigo (Carvalho – Vocals) joined were you functioning as an instrumental band or did you have another vocalist?

PABLO – We had a vocalist that was around for about a year and we put out an EP – ‘Departure‘ – which happened to be the demo that caught the eye of Monte Connor [Nuclear Blast A&R]. Our then vocalist decided to quit the band and that’s when Rodrigo (Carvalho– Lead vocals) joined.

I was already friends with Rodrigo before he was involved so it was a very smooth transition. We called him up the next day and it’s been great ever since.

OD – I know that in comparison to other bands that are trying to make it, you guys got snapped up pretty quickly with Nick Storch (US booking agent) and Pallbearer/Daughters management, just based on the demos alone! How did all of that come about?

PABLO – Yeah, our journey to where we are now has been a little bit unusual. We officially formed as a band about five years ago and we decided very early on that we were going to write the very best material/songs that we are capable of writing.

We spend a great deal of time crafting the bands sound and each one of the songs for the EP and literally within a couple of weeks the engineer who we were working with, sent over the tracks to Monte and then he [Monte] reached out to us before we even played our first show together!

So, the ball has really been rolling since the start and we’ve come a very long way in a very short space of time. We had a little courtship phrase with Monte and by the time Nuclear Blast signed us, we already had the EP out and we already had a good chunk of the songs that are on the album written, so by the time we went to the studio the ball had been rolling for about a year and a half or two years. 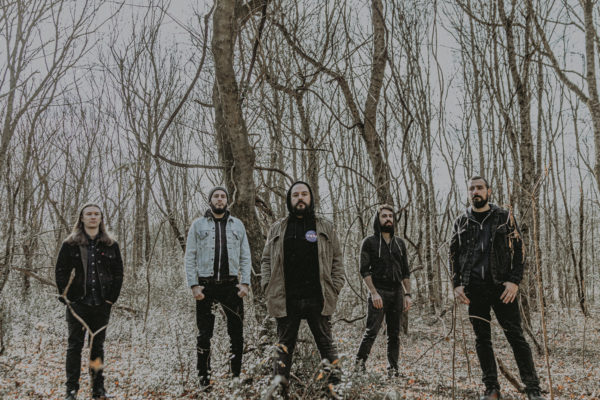 OD – Wow! So Monte had not actually seen you guys perform live when you were signed to the label?

PABLO – Yes, which was kind of bizarre for us because the demos we were sending him was after Rodrigo had joined the band and it was just ideas that we were working on from home. Adam (Mitchell-Guitars and Vocals) has a home studio that he built, so it’s not like we have super-shitty equipment [Laughing] but still, it was stuff that we were putting together in our house and he [Monte] was still interested in.

I think at one point he asked us for a live video of us performing and we sent him over a DIY style video with bad lighting [Laughing]. But he [Monte] was really going off the demos that we were sending him and that led to us getting the deal with Nuclear Blast.

OD – When Monte finally saw you guys performing live, was it a nail-biting experience? As I’m sure you were aware of his presence in light of being signed to the label.

PABLO – Actually, he hasn’t seen us live yet! We live in Atlanta and he’s in New York. There was talk of us heading up there to do a one-off show but with this Pandemic, everything’s up in the air. But yeah, when that day comes for Monte to see us live, it’s gonna be an interesting gig for sure.

OD – So, this new album ‘Order of the Mind’ was released on March 27th, however, a few singles were already out there prior to the official LP release. Were you all very nervous about the reaction to the singles? 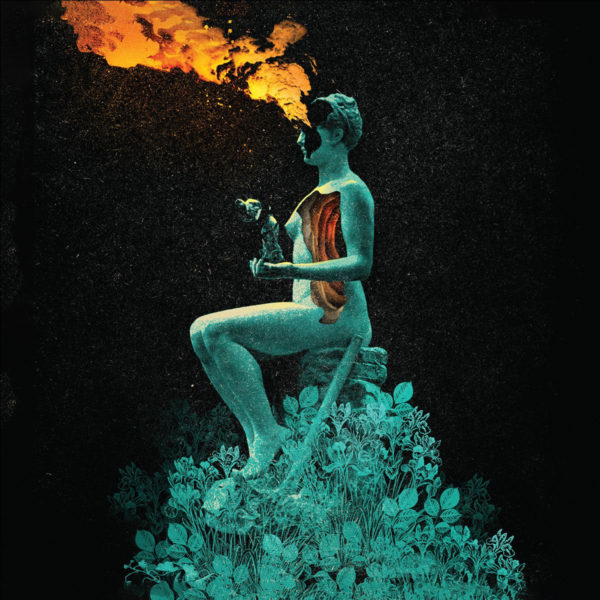 PABLO – No, not really. The reason for that is because we had been keeping things under wraps for so long that we actually started to get anxious about NOT sharing them with people. [Laughing]. We just really wanted to get the music out there and move forward with things.

We did not care what the reaction was going to be, we just wanted to release the music. Fortunately, the stuff that was put out prior to the album was received very well and overall, we’re pretty happy with everything so far, apart from the chaos that’s been caused by the Pandemic.

OD – It’s evident that there’s a lot of styles mixed into the music on the album, can you talk me through the general process of writing, who is the main contributor etc?

PABLO – By the time a song is finished, everybody has ‘touched’ it in one form or another. But for this album specifically, I actually recorded the ideas of bass, drums and guitars at my house and sometimes present them as just loose ideas or song structures. Then Rodrigo will then usually lay down some kind of vocal line and we will basically just dissect everything after at over at Adam’s studio in his house.

That’s when we spend weeks or months working on the songs, remixing, re-tracking stuff and then Jason [Drums] will come up with some crazy ideas and we’ll just hammer down as many ideas as we can until we get to the finished structure. We tend to give ourselves some distance from the music and then come back to it over a period of time, where we hear things that we necessarily didn’t hear before and begin to fine-tune things.

OD – It’s been reported that Conjuror’s debut “Mire’ was a source of inspiration for the band. When you look at these new bands that are ‘hard to define’ or ‘box’ that are emerging from all over the globe, do you feel that you are part of that scene?

PABLO – For me personly, it’s hard to say. What I can say is that we draw from several genres and that ends up in the music. I’ll hear a certain thing and the rest of the guys will pick up on something that I purposely didn’t put in there and they will then make their own translation and apply that. So, I get what you’re saying but it’s not really for me to say. I guess we’re not your ‘typical‘ heavy band and are accustomed to blurring multiple genres.

A lot of people get so caught up in analysing and tearing things to shreds to try and find out how to ‘box‘ the style or genre, rather than just listen to the music and let it be what it is. People just need to give albums a chance in their entirety. It’s a piece of art, representing a moment in time. A lot of the way people are consuming music today is influenced by their shorter attention-span and don’t really look below the surface on most things.

OD – How long have the tracks on “Order of the Mind’ been completed and has there been any new material written since the album was recorded?

PABLO – Always! We’re always writing. I told myself that when we got back from recording the album in the UK [Spring of 2019) I was going to take a break, but that lasted only a week! [Laughing].

Now that we’re all in lockdown, we’re just writing new material and coming up with new ideas, so we’re kind of back to square one with new material. It feels different this time around because we have the peace of mind in knowing that we’re not signed and the debut album is finally out there.

The wheels are very much rolling now and before we were signed, it felt like we were in ‘limbo‘ because we had no idea when we’re going to record, or where that was going to happen. We didn’t have a ‘team’ working with us like we do now and that’s a very reassuring and comforting feeling. Now we can just purely concentrate on working on the best new material that we are capable of writing.

OD – In light of what’s happening what can we expect from Irist this year?

PABLO – Well, everything’s up in the air at the moment and to be honest, I’ve no idea at this point. We did have an album release show scheduled in Athens, Georgia but obviously that has been postponed. We were scheduled to play the Damnation Festival (see below) in November, so hopefully, that is still happening.

We’ve been throwing around other ideas and tours in other places but none of that is official, especially now. 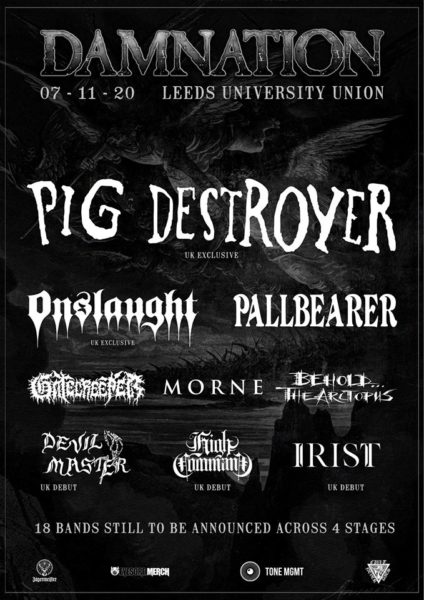 OD – If you could tour with any band or artist, who would it be?

PABLO – Ohh shit!! Hmmmmm… we’ve all got our legacy bands but for me personally, I tend to go super-deep on bands and kind of obsess on their albums over periods of time. So, recently I was all about the band ‘Daughters‘ but it’s one of those things that I can’t really see happening as we are very different in style but you never know.

Oh, another band I’d love to tour with is YOB. Then, of course,  there’s Conjurer also, those guys are fantastic. There are so many bands. My tastes are all over the place. At this point, I’ll be happy to just get out there and play shows! [Laughing]

OD – Can you play us out with a video of your choice and tell us why you’ve picked the video?

PABLO – I’ll have to say Daughters ‘Guest House‘. That is a slamming track. Enjoy the video.

Irist ‘Order of the Mind‘ is out NOW via Nuclear Blast. Order your copy here.

Bonus video!!! We asked the guys about their primary influences behind the new album, check out the video link below and be sure to LIKE/FOLLOW us on our socials.

Irist gave us the rundown of their personal influences on the debut album 'Order of the Mind'. The new album is out now via Nuclear Blast [click this link to purchase http://nuclearblast.com/irist-ootm]. If you've not heard it, or haven't checked them out, do that today! 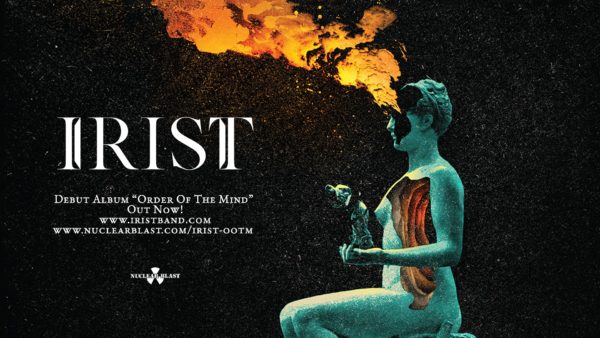