FEATURE INTERVIEW – VOIVOD: “WE HAVE CREATED A VERY SPECIAL AND UNIQUE SOUND “MICHEL ‘AWAY’ LANGEVIN 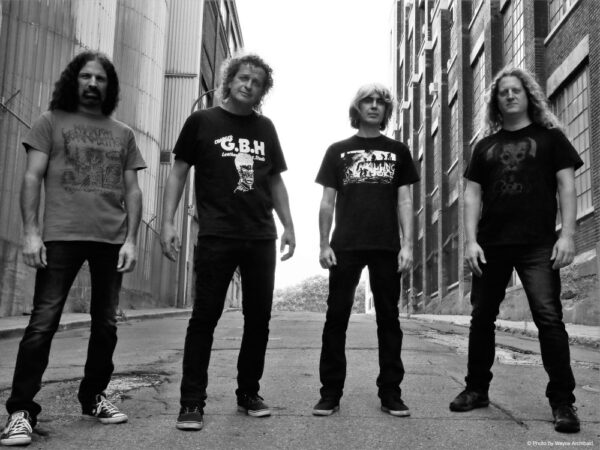 For close to 40-years, Voivod has been producing earth-shattering, genre-bending music which has earned them a highly-respected reputation from all corners of the global underground music community.

Having formed in 1983 in Jonquière, Quebec, the Canadian experimental project created a totally unique sound that broke down incalculable barriers across a multitude of genres, to which they still continue to do so, to this day.

Their recent ‘Lost Machine – Live‘ release is a perfect imprint of Voivod’s sheer power and evolution, not to mention their invaluable contribution to heavy music.

Overdrive caught up with drummer/founding member Michel ‘Away‘ Langevin [pic below] to talk about the album, news of an official Voivod documentary and boxset and the effects of the pandemic on the bands’ plans. 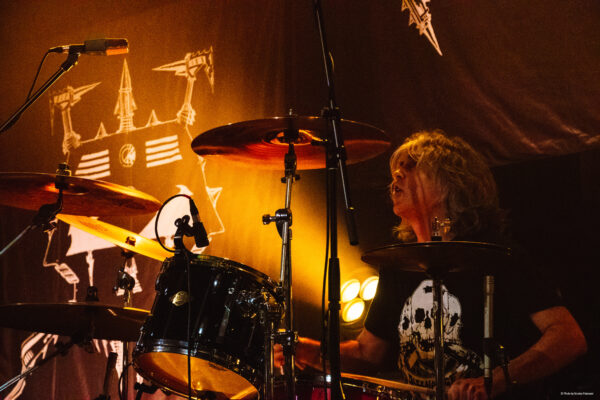 OD – Let’s kick off with this new live album. I have to ask, was this on the cards at the beginning of the year, or did the pandemic inspire the release, as I know that you had pre-planned for Francis [Perron] to record that Quebec City Summer Fest show back in July 2019?

AWAY – We first decided to document it for a Voivod movie that’s currently being made right now, but as soon as we got off stage after that gig, we just all knew that this was a very special show and it could be used as a live album.

Then when the first lockdown happened back in March, it obviously had a major impact on our plans, so we started looking at what we could do to keep some kind of momentum going and that kind of kicked off a discussion leading to the release of the footage.

We actually shot a video in November last year before we went on tour with GWAR in Europe so, that also accelerated that process of releasing ‘The End Of Dormancy‘ EP with the video we had shot and we used tracks that we had from the Montreal Jazz Fest and the Quebec Summer Fest… we actually were originally going to release the recordings from both of those gigs on one live album, but we just decided that the whole Quebec show was just so solid. 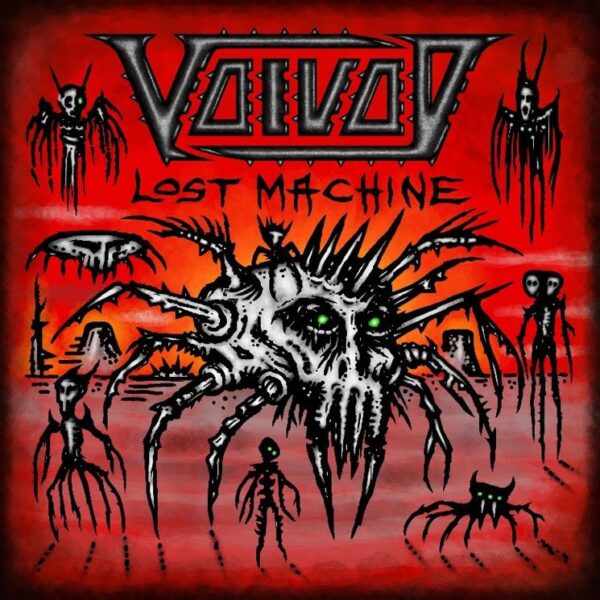 Once we decided that, it was kind of a quick process as we only had a certain amount of time to get the artwork done and crackdown some photographers who had taken pictures at the gig, so we could put together the booklet. So, yeah, it was a really busy period [Laughing].

OD – Before we continue, I have to ask, has there been any progress in writing new material since we’ve all been in lockdown and grounded over the last 9 months?

AWAY – We have some ideas floating around that we have been working on while social distancing. We were able to use Logic Pro and Dropbox and that seems to be working for us, considering the social restrictions.

We have a bunch of improvisations and loose ideas that are kind of ‘spur of the moment‘. There are some structures there and we just went about piecing them together electronically, as we have no access to our studio downtown.

OD – Did you find this process to be very alien considering that you would normally be all together in a room?

AWAY – Yes [Laughing], it has been a very strange but educational experience for me personally. I’ve had to programme the drums for the new ideas and just being in a position where we can’t actually be in a room together bashing out the ideas, the traditional way.

I’ve come to realise and understand a different side of our sound and the way we create/write. Don’t worry, we are still very much VOIVOD, but it’s just given me a different perspective on things. 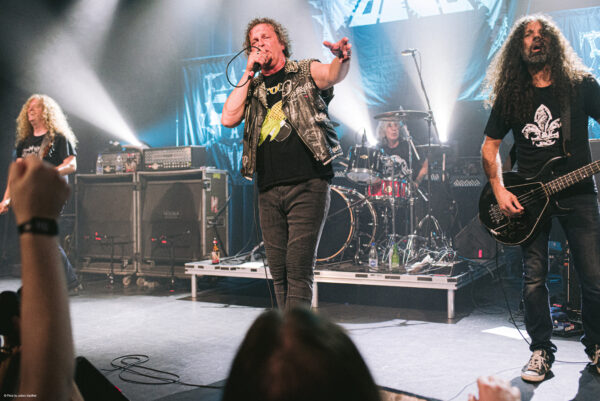 OD  – So, would it be a good assumption to suggest that there is enough material there for the guts of a new album?

AWAY – Well, it’s very early days yet but we have some solid foundations to new music. Snake [Denis Belanger] is currently building a studio in his house because all of the studio’s downtown are closed and who knows what’s going to happen in the future. It’s better to have our own studio.

We also did a test run of performing online and that went really well, so we are looking to possibly do something like that going forward. I can’t wait to just get back to performing again in one way or another.

OD – Never a band to follow trends, Voivod has always marched to the beat of their own drum [literally]. When you look back, did you ever feel pressure from labels etc to conform to the latest craze/fad that was happening; within the heavy music scene?

AWAY – There was only one occasion when I was asked by the label or management to put a little less double-kick drums on the recording [we were currently working on the ‘Angel Rat‘ album in ’91] as they were looking at ‘Nothing Face‘ [1989] as being a Thrash Metal album and they felt that they could push the album a bit more if there were less double-kick drums. That album was kind of went below the radar but is regarded as one of our more popular albums from our discography.

That was the only time that someone got involved in our writing but we have been fortunate that we have been left alone to do what Voivod does. When we play shows we get so many fans from all corners of the heavy music scene. We seem to connect with so many people and I think that the labels can see that. We have created a very special and unique sound. They [labels] just don’t’ mess with the balance of what we do. Thankfully! 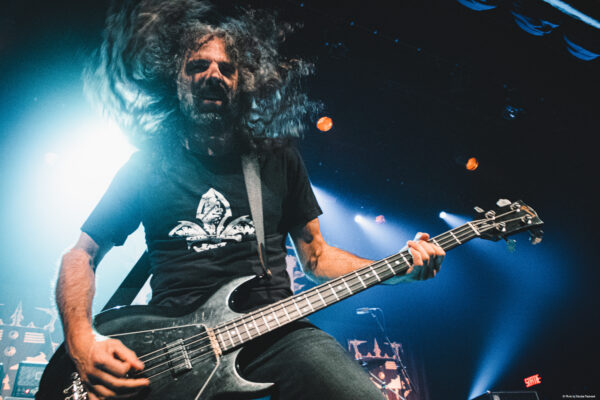 OD – Looking back on 2018’s ‘The Wake’ album, did you find that the response was invigorating for all involved and was there a positive reaction with regards to writing, as the album was received so well from critics all over the world?

AWAY – Yes! As soon as the album came out, the reaction was incredible. I really thought that the days of releasing an album and people taking the time to listen to the whole album were gone because of technology and the impact of social media etc. But, so many people really embraced ‘The Wake‘ and it was very humbling to see.

We were in Romania starting to tour and as soon as the album came out the shows were packed and the reception was incredible.  We eventually ended up winning the JUNO Award [pic below] in Canada which was just incredible. It’s probably going to be a really hard album to top, but we’ll have to see what happens. [Laughing]. 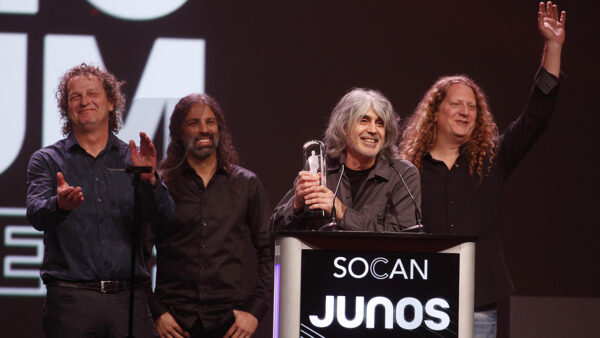 AWAY – [Laughing] Well, that’s just a matter of subconscious thinking on our behalf. Oh, there was actually another live album that was released in 2012. ‘Live at Roadburn‘ was a double album. I nearly forgot about that [Laughing].

OD – I’m sure you’re aware the bands’ 40th anniversary will be upon us come 2023, which is really not that long-off. Are there any plans to do something big?

AWAY – I’ve only just starting to think about a boxset and I should really get on it because these type of projects take a long time to complete. There is so much material that we can do for a boxset and it would be great to see that mark our 40th anniversary. There’s also the idea of doing a special tour to celebrate our legacy.

Technically, we formed in January of ’83 so we have until January of ’23 to get our plans together.

OD – Voivoid have been known to do the odd cover version over the years from Venom’s ‘In League with Satan’ to early cover versions of Judas Priest, Motorhead and Pink Floyd ‘Astronomy Domine’, of all the covers was there any that you recorded or rehearsed but decided to pull out on the last minute?

AWAY – Yeah, there are many of them. At one point back in ’92, we had the idea of doing a cover album that had loads of songs from Iggy Pop, Jimi Hendrix, Bauhaus etc, which we had recorded as a demo, but somehow, I lost the tape and can’t find it [Laughing]. I’m sure it will turn up again at some point.

We have always enjoyed doing covers. For as long as we’ve been a band we’ve been covering songs from Dead Kennedys to GBH and everything else in between. 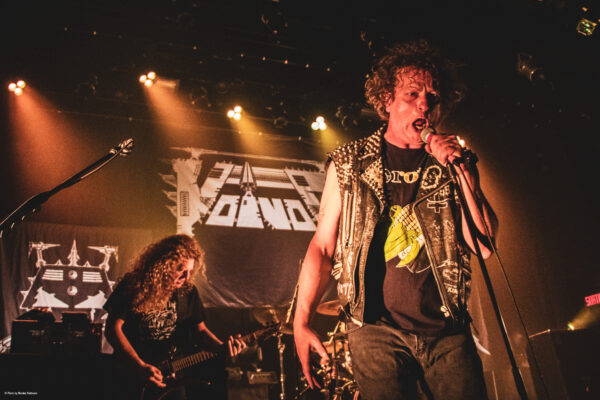 OD – In saying that, would you consider recording a releasing a covers album?

AWAY – Yeah, perhaps! It’s something that I’ve never really thought about for a long time. If we did, it would be some really obscure stuff. Who knows what’s gonna happen but yeah, I’d be totally interested in doing that.

OD – The band has a huge discography as well as a fascinating history, are there any plans to document everything as one body of work in the near future?

AWAY – Well there is, in fact, a movie/documentary currently under production. Of course, the pandemic and the lockdowns have resulted in things being severely delayed. The movie was actually started by Sam Dunn [‘Metal Evolution’] then he got very busy and then when we reformed in 2008, we became very busy, so things were put to the side.

Anyway, the film is now back in production and Felipe Belalcaza [Producer] who worked on our videos from the ‘Lost Machine‘ album is finishing the documentary. He was supposed to travel to Montreal last Summer but with the pandemic, it’s once again causing all kinds of issues. He just needs to get some interview with me and Snake to finish off the film. I reckon it will be released in early 2022.

OD – Finally, if you could have given yourself one piece of advice throughout your career from the present you, what would it be?

AWAY – I would say: “Stick to your style and don’t change just to make people happy“. We always did our own thing and we created something very unique. Fortunately, we have found ourselves under the ‘Classic Metal Genre‘ and we are invited to play at festivals all over the world and I’m very grateful for that.