With their current ‘Servant of the Mind’ tour finally in full throttle, Danish/American Rockers, Volbeat are packing out stadiums across the EU and are due to hit Ireland on December 12th in the Capital’s 3Arena. 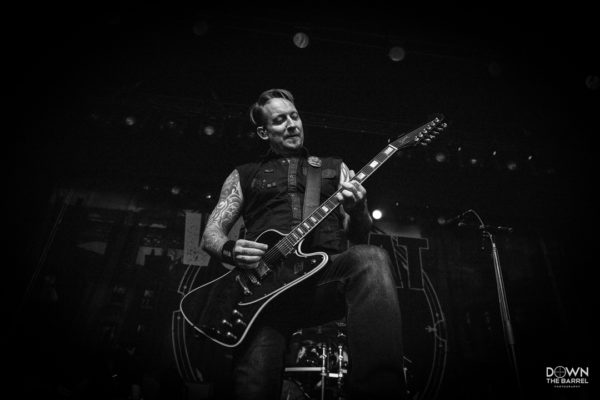 Vocalist/guitarist, Michael Poulsen took some time out from the bands pre-show activities in Switzerland to tell us about the new album, how it all came together during the lockdown, plans for the setlist and so much more…

OD – With nearly a year old, ‘Servent of the Mind’ marks Volbeat’s eight studio album. In light of the circumstances of how this album came together during the pandemic, how does it fit into the bands discography, for you personally?

POULSEN – For me, this album feels like the way we used to do things back in the day. It felt like a re-birth of what we did in the beginning, and then taking the experience of being better songwriters with more heavy stuff. It still feels very new because we’re only just getting to promote the album, and play these songs live.

What I’ve also noticed is that the album seems to have settled a lot of divided opinions with our fans, and for once they all seem to agree with each other. [Laughing] After so many albums, there are people that have their favourites, and in this case, they all seem to have stopped arguing with each other [Laughs], and collectively like this latest release. It’s nice to see them all getting along…for once. 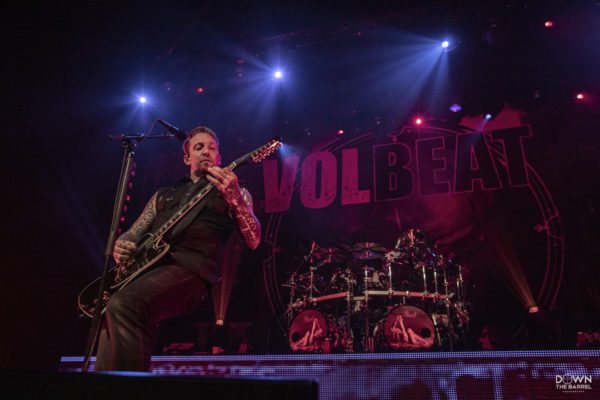 Down the Barrel Photography © 2022

OD – With three of you based in Copenhagen, and Rob [Caggiano/Guitarist] in New York, was it like business as usual for the time being, or did it upset the Volbeat eco system?

POULSEN – For the records that we’ve done with Rob, we always book two studios. He has a certain way of working that takes a lot of time. That’s just his way. For us, we like to work really fast and spontaneously, and that’s just the way we all connect with the music. We respect the way Rob works, but for me, I don’t like to spend so much time focusing on certain things, as I feel it will loose it’s magic. He [Rob] puts in a lot of hours, and likes to go deep into the structure of the song, working his parts into the arrangements. That’s just his way of working, so that’s why we always book two studios.

When it came to ‘Servant…‘ it made no sense to me to just sit around, and wait for the Pandemic to blow over. I would take my kids to kindergarten, and just go home, and write as much as I could, all day long. 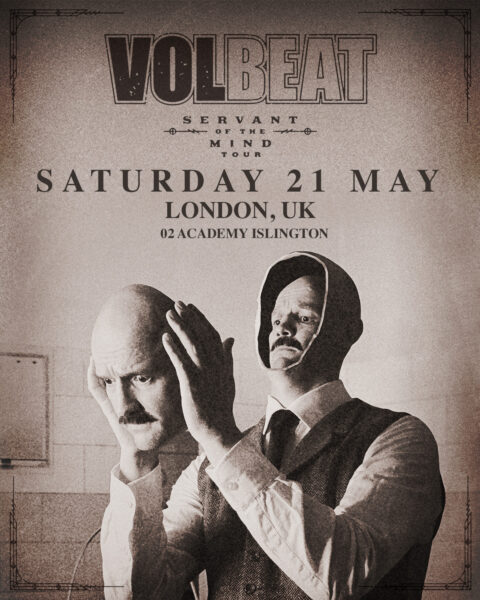 I did that for three months, consistently. John, Casper, and I then booked a studio where we hammered out the album in about a week! Rob then booked a studio in New York, and he used a lot of time to put his parts together. That being said, I think it’s some of the best work he’s done to date.

His solos are fantastic, and  they work so well with the music. At the end of the day, the whole experience was really fun for me. We worked very hard, and then sent over the files to Rob, where he laid down his parts, and the whole process just felt very natural, considering that Rob couldn’t come to Denmark, even if he wanted too. 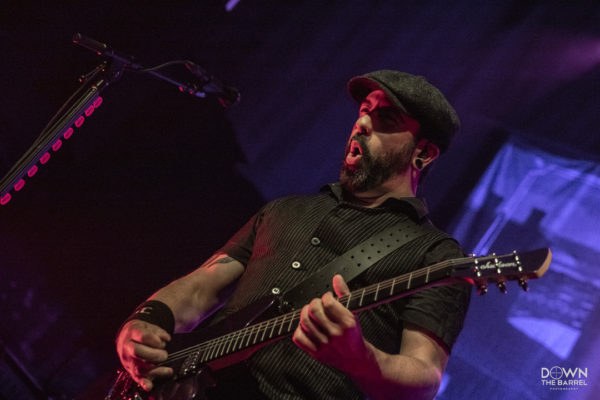 Down the Barrel Photography © 2022

OD – You had said that the album’s material came to you very fast, due to having the time. In light of that, did it make you feel any different about the way you write going forward?

POULSEN – I really don’t like overthinking things too much. When I look back, we were all a little pissed off about not being able to tour. We felt we were letting our fans down, because of the cancelled shows, but in reality, there was nothing that we could have done to overcome that situation. We just had to sit back and wait…

For me, there was this huge amount of energy that I usually release by touring, and being on stage, so the task was to offset that in a positive way. So, I just stayed in one creative bubble, and kept writing and writing, until I felt we had an album. Normally some of the past records were written in fractured periods of time because we would have to tour in between. This has proved to be problematic in the past as it disrupts the creative bubble and it can be hard to get back into that mindset when there’s so much going on.

It could take some time in the past when it came to writing new music, but this time around, it happened really fast and I literally didn’t stop writing until I was done, which was, in fact, three months. Overall, it was a really great experience for me, and I just felt so inspired. We didn’t really skip any ideas this time around. Normally, we might discard up to twenty ideas, but this time, we only shelved half a song. So, that’s pretty good going if you ask me. [Laughing]

OD – Because of the fact that it was written in 3 months, at what point did you contact Jacob Hansen (producer) to lock him in for the recording sessions?

POULSEN – I talked to our management, Q Prime, and there as a plan that after the first round of cancelations in the US, we had planned to hit the road three months afterwards. We didn’t know that the Pandemic would carry on. So, I set myself a challenge to write new material in that three month timeline. My thought process was that we could get ahead of our work load, and if we could do this album during the downtime, then go back out on tour, we’ll be already waste deep in the new album, and most of the hard work will have been done. So, I just booked the studio, and we all just dived in.

Before we knew it, we had the album finished and the Pandemic was still in full force, so it was nearly a year after we had recorded the album that the lockdowns were finally lifted.

OD – You stated in one interview that you felt this album was a sort of ‘rebirth’ for the band. What did you mean by that?

POULSEN – The interesting thing about this album (and all of our other LP’s) is that I don’t know where things are going to go until I pick up the guitar. I knew that I didn’t want to make ‘Rewind…’ part two. If we had tried to do that, I think it would have taken away what made that album so special for us, and I didn’t want to change that. So, I just picked up the guitar, and started working on ideas. It felt like how I used to do things way back, and the music was a little more heavier, just like back in the day.

So naturally, I wrote like I did years ago. I didn’t want to force anything. The whole process was so inspiring. We went back to the way we used to write, but as better songwriters… with better song structures.

OD – When you look at other bands that are telling their story, with documentaries, books, even graphic novels etc, does that get you interested in doing something similar for Volbeat?

POULSEN – We have had a lot of offers from different people, but for me it’s like every second month, things are changing, and our story is not at a place in time for it to be documented just yet. I would rather wait until we are at a stage where there is a lot more “meat on the bone“, if you know what I mean. [Laughing]

It’s gonna happen, but not just yet.

OD – With so many things already accomplished over the bands 20+ years, do you have any specific projects, or collaborations that you would like to see become a reality in the coming years, and if so, what?

POULSEN – We all live in a very crazy world with a lot of challenges and it’s becoming more difficult for bands to tour. I’m just so thankful that we are one of the bands that get to still do this. It’s become extremely expensive for bands to tour, and no one really knows what’s gonna happen in five/ten years from now. It’s definitely a concern, that’s for sure.

Thinking about anything else is almost impossible for me as I just want to play live, in as many places that I can, and put on the best show that we can. That’s really what’s on the forefront of my mind right now.

OD – Regarding the forthcoming EU/UK dates of the tour. Fans have been keeping an eye on the setlist, and as we can see, you recently played ‘Lonesome Rider’, and ‘Slaytan’ for the first time. Will you be adding anymore tracks, or changing up the setlist for the tour? 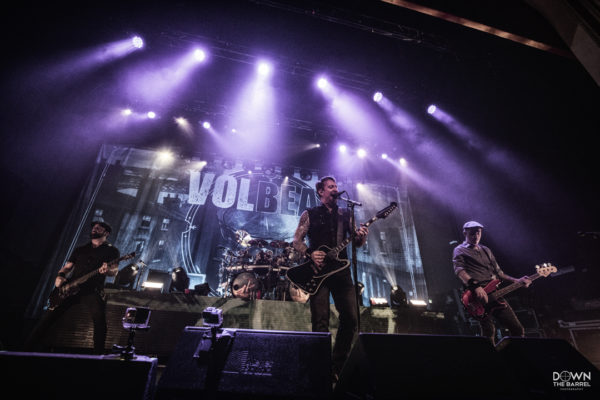 POULSEN – There probably will because we like to change it up as much as we can. At the moment we are getting used to a brand new production for the live shows. We have a lot of stuff happening on large screens that are connected to the music, and the lyrics, so it’s not like we can change out the setlist every other night. But we will be changing things here, and there as the tour continues. I’m pretty sure by the time we get to Ireland, and the UK we will definitely be added new songs to the setlist.

OD – At this point in the bands career, would you say that Festival headline slots are in the not too distant future, or do you think there’s a lot more time before that starts to happen?

POULSEN – Well, we’re already doing big festivals, but certain ones that we haven’t yet performed. I don’t like to think about it too much. I just want to concentrate on what we are doing night after night, putting on the best show we can, and I’m sure those opportunities will come when they are supposed too. Right now, I’m just happy to be playing live and being on the road.

Volbeat will be performing in Ireland’s 3Arena on December 12th, with special guests, Skindred, and Napalm Death. Tickets on sale NOW via Ticketmaster. 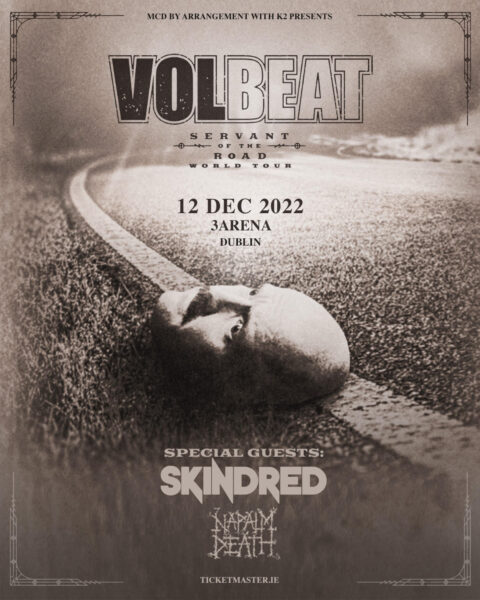