Ricky Warwick will bring his Fighting Hearts band to Dublin for an evening of hits drawing from his vast career in The Almighty, Black Star Riders, and Thin Lizzy this coming Tuesday [March 15th]. The frontman tells us all about the tour, his new solo album, and much more… 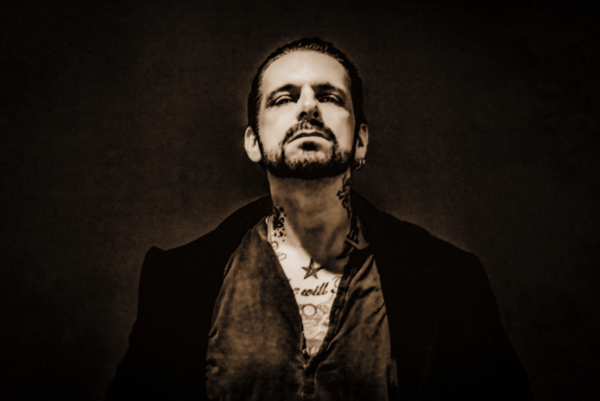 Speaking from his home in sunny L.A., Ricky Warwick is in good spirits…

In fact, Ricky is in fighting form as he excitedly chats to us about his new solo album ‘When Life Was Hard and Fast‘ and the prospect of finally getting back on stage after two years of lockdown.

A man with many fingers in many pies, we discuss his projects from the new Black Star Rider album, now that Scott Gorham is no longer in the band, to his new solo album, working with an eclectic range of musician friends and of course, plans for Thin Lizzy tour dates…

OD – Firstly, tell me about this up-and-coming tour with Jack Taylor [Tax The Heat], Ben Christo [The Sisters of Mercy] and Richard Vernon [The Mission] came about? It’s an unusual cast of characters that I’d not normally match up with you.

RICKY – Well, we’re the ‘Fighting Hearts‘ and that’s really what it is. It’s an interchangeable band with a lot of my friends jumping in and out of the line-up, depending on what they have going on with their own schedules.

Thankfully, I know a lot of phenomenal musicians, and Jack, Ben, and Christo, are a fantastic group of guys and I have to say they are on fire at the moment. The band is sounding incredible and we can’t wait to get back Dublin and let it rip. This is a really, really strong line-up.

OD -The album, “When Life Was Fast and Hard’ is yet another feather in your creative cap. Do you find that you’re in a very unique place that you can be so eclectic with your creativity?

RICKY – I’m very blessed because I work very hard. I think I’m at an age now where I’m very comfortable in my skin and I’m not second-guessing myself. I’m very acutely aware that people expect certain things from me, and I don’t want to let them down. I’m still learning every day. I’m always picking up the guitar and writing as much as I can, and the writing the very best to my abilities. It’s a good feeling but I’m far from done. [Laughing] 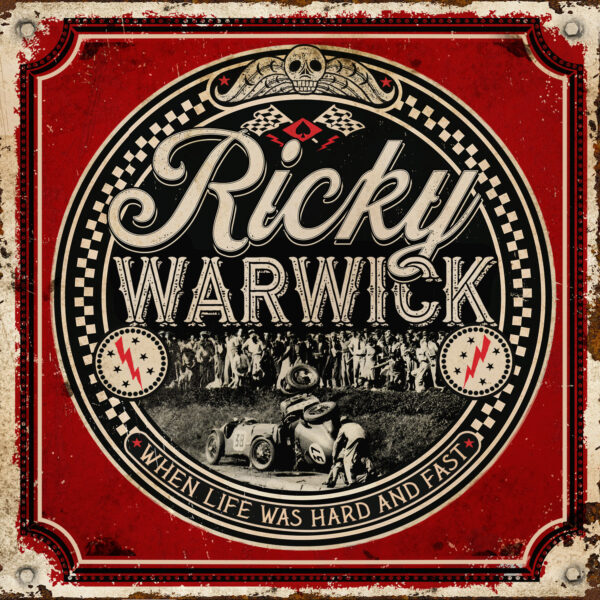 OD – Speaking of this new album, this is now your seventh solo album. Do you find that the overall process of being in total control of what you’re doing and being able to invite friends to get involved, is a great accomplishment? [Joe Elliott/ Dizzy Reed / Andy Taylor [Duran Duran].

RICKY – First and foremost I’m a huge fan of these people. I’ve worked with Joe a lot he produced some of my first solo albums and I was actually his best man at his wedding. So, we’re age-old friends. Joe has always been a great supporter and ally of my creativity and I trust him. Who’s gonna argue with a guy that’s sold over 100 million records? [Laughing]. Andy [Taylor] and I go back a long way also as he produced The Almighty’s ‘Soul Destruction‘ album back in ’91 and we’ve been friends ever since then. I’ve actually been working with Andy on his own solo album, which is due out soon.

We wrote about 10 tracks together just before the pandemic kicked in, so keep an eye out for that. So, there are a lot of connections going on and it really is an exciting prospect for me and I love the dynamic of bringing, as many people on board as possible. I get to be as narcissistic as I like [Laughing]. All joking aside, it’s a huge honour to have so many great people in my life whom I can work and create music with. I’m truly blessed.

OD – Having finished the album in April 2019, and finally releasing the album back in 2021 [over a year ago], it must be good to finally get out and start gigging once again. Have these songs evolved in their own way, since their conception as you’ve had to sit on them for so much time? 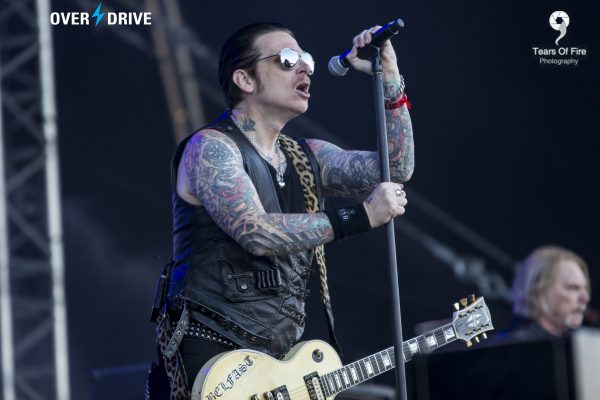 RICKY – I think that will definitely come once we start getting used to playing them live. The magic really starts happening when we get on that stage. Obviously the pandemic has prevented us from doing that, but I’m really excited about the way the songs will evolve. By the time we hit Dublin, it’s gonna be a well-oiled machine.

OD – As far as the setlist for the up-and-coming shows, will you be just concentrating on the album or will there be some material from the other solo albums or perhaps, Black Star Riders?

RICKY – We are gonna be doing a mixed bag of stuff. Lots of The Almighty classics, some BSR, and Thin Lizzy tunes also. Perhaps a few covers also. There’s gonna be something for everybody.

OD – Speaking of Black Star Riders, what’s happening with new material and when can we expect to see a follow up to ‘Another State of Grace’?

RICKY – The album is actually finished right now and is currently being mastered. There are fourteen new tracks on it and we worked with Jay Ruston [Producer] who did ‘Another State…‘ here in L.A. and it’s sounding great.

Of course, this was the first BSR album without Uncle Scotty [Scott Gorham, Thin Lizzy] which was strange. He’s been on the phone every now and again, checking in on things and I’ve sent him over the tracks to get his approval and whatnot. We definitely missed his presence in the studio, but I think we’ve adapted and brought everything down to a four-piece.

I’m very excited about the albums and we’re looking to release the first single this coming September. We’ve also signed a new deal with Earache Records and the album is expected to be released in January 2023 and we’re gonna hit the ground running. 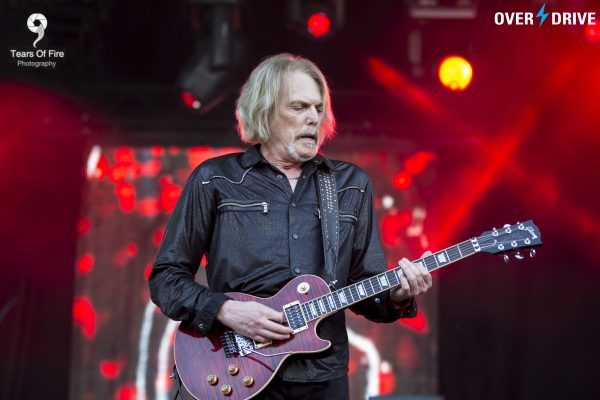 OD – So, a whole new chapter for BSR with a new label and revised lineup?

RICKY – Yeah, we filled our obligations with Nuclear Blast and they did a great job. We were with them for four albums. I’m still part of the Nuclear Blast family with my solo stuff, which is great.

We just decided that with all the change that was happening with the band, particularly with Scott wanting to step back, we just decided to make new changes all round.

OD – Can you give an update on Thin Lizzy plans, or is it too soon to say anything?

RICKY – There’s definitely plans for stuff later this year. I’m not sure if it’s gonna be in America or Europe. I just wait for Scotty to give me the call and I’m there. He’s not stopping anytime soon and there are some plans definitely afoot. He’s just not that keen on living on a bus for months on end, and to be honest, I don’t blame him [Laughing].

I’m so delighted that I get to be part of Thin Lizzy and embrace all my experience with the band. It’s a lot of fun.

OD – With regards to Thin Lizzy, will there be any new music released or is it just plans for touring the bands legacy?

RICKY – It’s just gonna be a celebrating of the bands’ legacy. There should be news about all of that in the coming months. 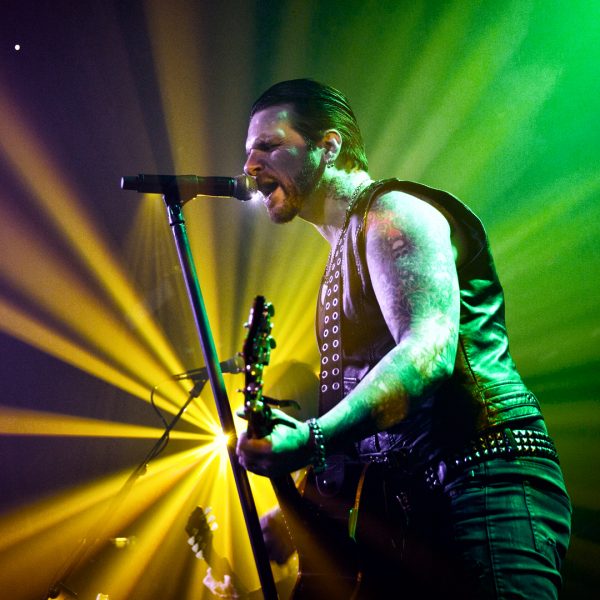 OD – With regards to the new solo album, are there any particular tracks that you’re excited about playing live, especially with Jack, Ben, and Richard’s chemestry in the mix?

RICKY – I’m really looking forward to performing the title-track on this, and also, I’m really excited about doing a lot of the duel guitar stuff with Ben on the new music, but really, I’m just thrilled to get back out there after two years of no live music! I can’t wait to get to Dublin as you know, I lived there for seven years, and the city is very dear to my heart.

All being well, I always like to come out to the audience after the show and sign stuff and hang out with whomever is about. I wouldn’t be here if it wasn’t for people coming to the shows so it’s the least I can do when and if I can.

Ricky Warwick and The Fighting Hearts will be performing for one night only in Dublin’s Academy Green Room on Tuesday, March 15th. Tickets are on sale now, priced at €23 [inc booking fee]. Purchase via this link. 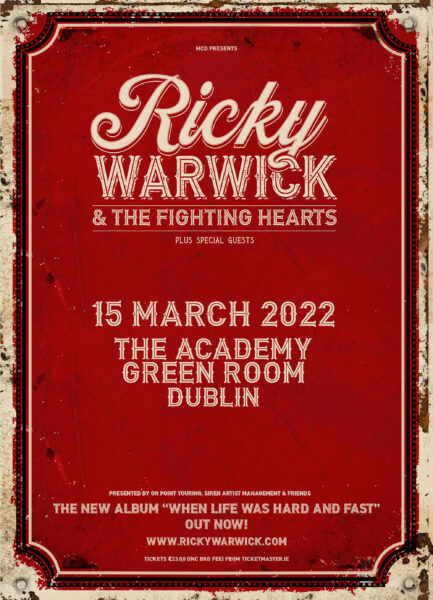