Fleshgod Apocalypse are ramping up the promo for the release of their new album ‘Veleno’ with a series of bite-size mini webisodes on the recording, writing and meaning behind the new LP. Check out the guys talking about the concept behind the title… 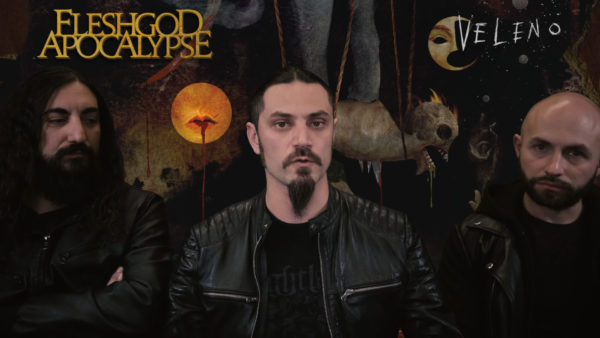 In about two weeks, Italian orchestral-death metal juggernauts FLESHGOD APOCALYPSE will release their 5th record, ‘Veleno’, on May 24th via Nuclear Blast Records.

Today the group has unveiled the sixth part of a supporting video trailer series, in which frontman Francesco Paoli explains the meaning of the album title and how it connects to all of the songs on the new record. Check out the video below;

Italian for ‘venom‘, ‘Veleno’ marks FLESHGOD APOCALYPSE’s first record in 3 years, since the release of their critically acclaimed record ‘King‘ (2016).

Fleshgod Apocalypse then took the effort over to Grammy-nominated Jacob Hansen (VOLBEAT, THE BLACK DAHLIA MURDER, EPICA) at Hansen Studios in Denmark for mixing and mastering. The entire production of ‘Veleno’ took, according to Paoli, about three months. Artwork for the album was created by Travis Smith (AVENGED SEVENFOLD, OPET H, KATATONIA).

Pre-order ‘Veleno’ via this link.