It’s the Rock n’ Roll movie we’ve all been waiting for. Fingers crossed they didn’t fuck it up! No pressure…

Motley Crue has released a short teaser trailer for the upcoming film adaptation of The Dirt, with a note adding that the full trailer will be released tomorrow. You can watch it below.

“Their music made them famous. Their lives made them infamous,” reads the teaser, as quick clips of the film versions of a car crash, a wedding, and Shout at the Devil-era live performances flash by the screen. “Win it all or lose it all, we are Motley Crue,” says a voice-over in conclusion.

The Dirt will premiere via Netflix on March 22. Nikki Sixx will premiere a new Motley Crue song from the film on Feb. 21 during an appearance on Jonsey’s Jukebox.

Last month, Machine Gun Kelly, a rapper who was hired to play Tommy Lee, said that he read The Dirt when he was 13 (“It was my Bible … I had the wrong idols growing up, for sure“), but said he only fully realized the level of debauchery in which Motley Crue indulged during the filming.

“It wasn’t until we were on set and doing these scenes that we were like, ‘Whoa, this is dark. What are people going to think about this?‘” he said. “But there’s something about the truth in that book — the fact that you do fall in love with these people [who] then do this giant nosedive into this dark place.”

Bob Rock produced the four new songs, which were recorded last fall. Upon hearing the rough mixes, Nikki Sixx said they felt “real and raw. Everybody is playing like mad and the songs crush. … Plus we have a surprise that will confirm that we’re outta our minds. You can trust us these are ball-busters. Everybody can relax. We’re soon gonna smack you upside the head with some killer new tracks. … We know what we’re doing.” 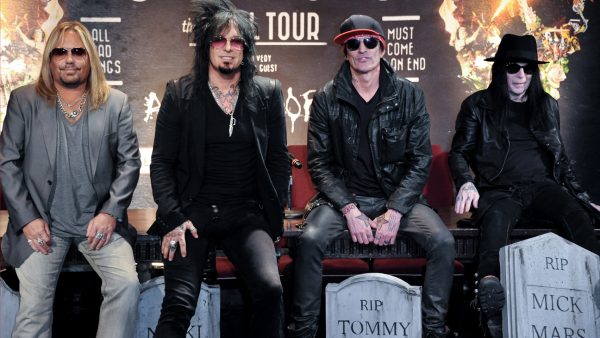