Ghost will launch their biggest ever European headline tour in April, kicking off the trek with four arena shows in the UK before heading to mainland EU. 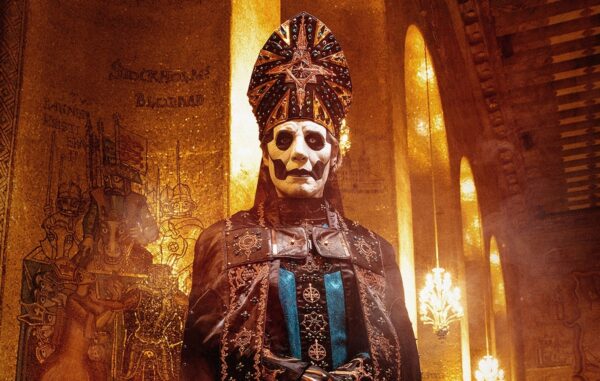 With the follow-up to the band’s 2018 ‘Prequelle’ album due for release at some point next year, Tobias Forge’s ghouls will follow up on their 26-city US co-headline tour with Volbeat, with an expansive tour of their home continent in the spring.

Ghost’s ‘Imperatour‘ will commence on April 9th at Manchester’s AO Arena and visit London, Glasgow, and Birmingham before tapping into Europe with a show at Rotterdam’s RTM Stage Ahoy on April 17th.

The European dates will run through to May 18th at the Budapest Arena in Hungary. 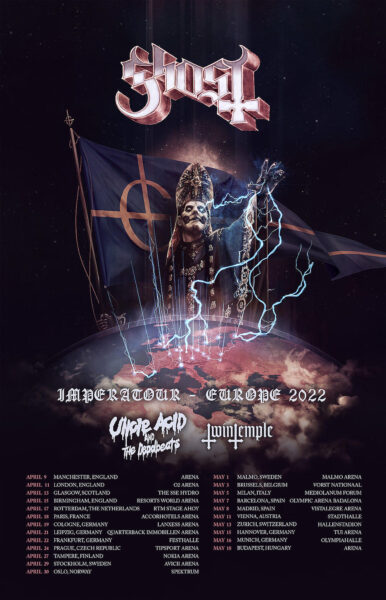 Support on all shows comes from Uncle Acid And The Deadbeats and Twin Temple.

Ghost’s creative mastermind Tobias Forge has already revealed the source material which inspired his writing for the new album.

“The album that I have been working on, I came up with that concept years ago,” Forge revealed in an interview with El Paso, Texas rock radio station KLAQ. “We played in Seattle in 2013, 2014 — something like that — we played at Showbox At The Market. I remember that day I came up with the idea for this record, this upcoming record. Because I got a book called The Rule of Empires. So, basically, I wanted to make a record about the rise and ultimately the unescapable fails and falls of empires.”

“An idea like that can take — at least me — quite far. So once you get that idea of, like, ‘Oh, now I know what the pile is gonna look like. I know now what not to put in there.’ And it was the same thing with Prequelle; it was gonna be about the great death, a medieval, primordial threat of annihilation which was, I guess I wouldn’t say carnal but maybe a tiny tad more spiritual and philosophical death, with the ever-presence of actual termination, whereas this record about the empires was gonna be a little bit more practical, I guess; a little bit more, I don’t wanna say political. So it wasn’t really hard to be inspired by the last couple of years.”

Ghost released their first new material in two years at the end of September. Hunter’s Moon features on the soundtrack of the new Halloween Kills film and will be released on seven-inch vinyl on January 21, 2022, with legendary composer John Carpenter’s Halloween Kills (Main Title) theme as the B-side.