With all the hype over the last few months of who will be gracing the stage as Saturday headliners, Overdrive can now confirm that GHOST will be closing the Bloodstock Festival mainstage on Saturday, August 12th. More details below. 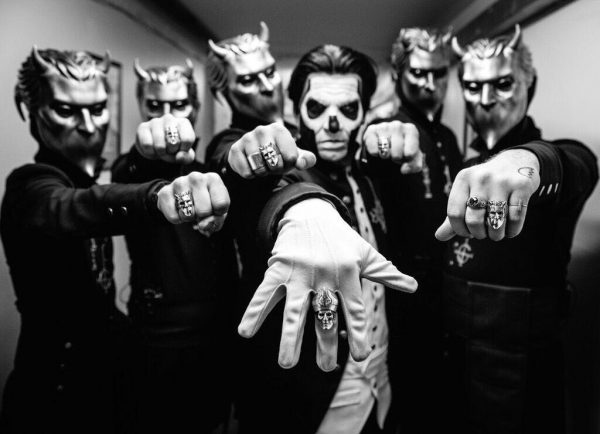 The announcement comes after the band’s sold out ‘Popestar‘ UK tour, which wrapped up today Sunday, April 2nd in Brighton.

These dates marked the band’ss return to UK shores following their extremely special seated show last March at London’s legendary Palladium – the world famous theatre situated in the heart of the West End. As the tour continues to work its way through Europe (see dates below), the band will be no doubt celebrating the announcement of their debut headlining slot at a UK Festival.

GHOST will be joining headliners AMON AMARTH (Friday) and MEGADETH (Sunday) along with, what is shaping up to be, one of the most metal gatherings the UK has ever seen.

The Swedish occult rockers have been experiencing a huge amount of success from their 2015’s ‘Meliora‘ and their latest EP ‘Popestar‘ and were honoured with a Grammy in the “Best Metal Performance” category in the pre-telecast ceremony at the 58th annual Grammy Awards earlier this year.

Bloodstock Open Air will be playing host to over 100 bands across four stages from Thursday, August 10th through to Sunday, August 13th and will be featuring the likes of Testament, Blind Guardian, Kreator, Hatebreed, Arch Enemy, Decapitated, Annihilator, Possessed, Obituary, King Parrot, Macabre, Skindred, Hell, Municipal Waste and much more yet to be announced.

If you fancy coming to BLOODSTOCK by coach, lock in your spot now to ensure you’re not disappointed! BIG GREEN COACH have 21 departure cities for coaches directly to BLOODSTOCK in 2017; Birkenhead, Bournemouth, Bristol, Cardiff, Chester, Glasgow, Gloucester, Leeds, Liverpool, London, Manchester, Middlesbrough, Newcastle, Newport, Oxford, Preston, Sheffield, Southampton, Sunderland, Swansea, and Worcester. BIG GREEN COACH will bring you, all your camping gear, & beer supplies and drop you hassle free right inside the festival grounds. Check out the details and secure your seat for only a tenner (with the rest payable in July) over at this location. Tickets are on sale NOW for 2017 and selling fast. Click this link to purchase your ticket.

Bloodstock Metal 2 The Masses Ireland have entered into the semi-final stages of their 2017 campaign with a total of fifteen bands scheduled to play later this month. The final will be taking place on May 13th in Fibber Magees, Dublin. For more information, please click this link.