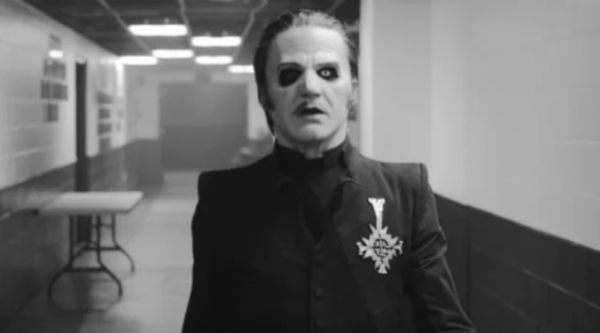 The black-and-white clip, which can be seen below, features footage filmed at the final show of the band’s “Prequelle” tour, which concluded exactly a year ago — on March 3, 2020 — at Palacio de los Deportes in Mexico City, Mexico.

“The actual recording will last around six weeks and then there’s two to three weeks of mixing and mastering,” he said. “So sometime in March the record should be finished, but it won’t be released until after the summer. As it looks now, knock on wood, we will then go on tour. We won’t release an album until we know that we are actually going on tour.

The album release will coincide with the start of a tour. Of course, we could announce an album release date and then, for some reason, it might not be possible to tour, but that’s a whole other matter.”

In March 2020, at the aforementioned GHOST concert in Mexico City, the band introduced the new character who will front the act for its next LP phase: Papa Emeritus IV.

Forge performed as a “new” Papa Emeritus on each of the band’s first three LPs, with each version of Papa replacing the one that came before it. Papa Emeritus III was retired in favour of Cardinal Copia before the release of 2018’s “Prequelle” album.

In October 2019, Forge confirmed that there would be a new character fronting GHOST by the time the group’s next LP sees the light of day.