It is 2017. Alter Bridge, one of the most celebrated rock bands currently roaming the planet, slash and forge their way to an island in the North Atlantic for the very first time. This concert neatly follows the sweet run of gigs Dublin has been enjoying for the past two weeks and people are quivering with antici – 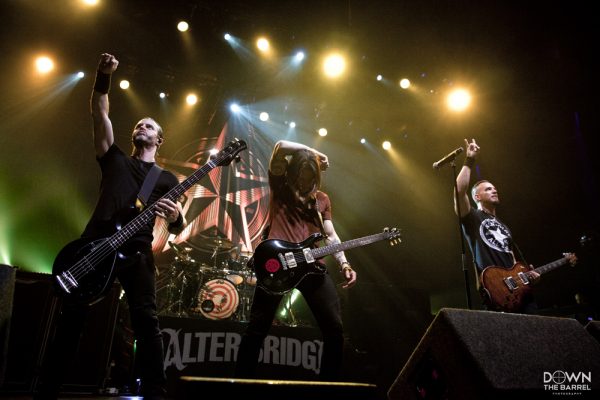 pation. From online petitions to bring this band to Ireland, to finally seeing a queue rapping its tail around Temple Bar leading into the fully sold out Olympia Theatre  – it’s been a good few years.

Red Sun Rising supported Alter Bridge on this glorious Tuesday evening. The supporting act hailing from Ohio are living and breathing hard rock in the flesh. Their explosive show retained the heat in our sun drenched bodies to finally embrace Alter Bridge with warm arms. Their music consists of hard driven
and versatile pulses, sexy grooves (and fricking egg shakers) – people are digging it. Red Sun Rising lead and pleaded with their confident stage presence, jumping, bouncing, bopping and including shenanigans on stage. The singer, Mike Protich, held the guitar on strap on the other side of the stage for one of the guitarists to dive headfirst into it. Particularly within the last song they played for us, ‘Emotionless’, ardent sentiments were clearly readable in the musicians bodies and faces. Often enough, supporting acts are not quite fitting (and of course, it’s impossible to please everybody), but Red Sun Rising were a tasty appetizer. 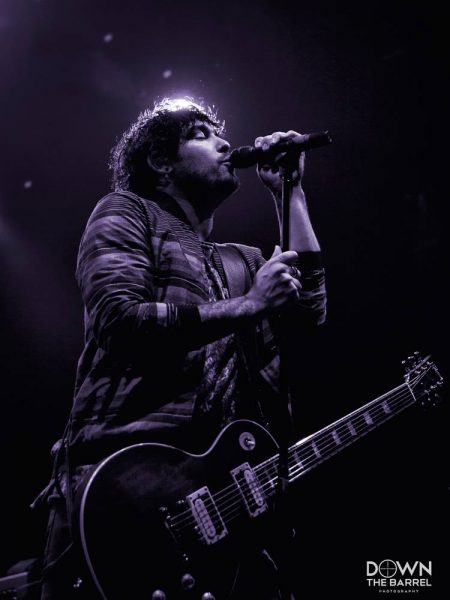 The giant geometrical star on Alter Bridge’s backdrop illuminated in royal blue. The crowd was repeatedly chanting the band’s name, heralding them onto stage – these were the last moments until they were finally welcomed in this realm, in this embellished romantic venue that served the ground for so many other legendary musicians.  A percussive beat, like preparatory war drums, built the tension until they fucking finally walk on stage in a smooth and sovereign manner.
Possibly somewhere in the venue, people’s eyes are leaking a little when they strummed the first notes. For the entire show, the musicians were never static, the members were constantly switching places, trying to look at every single face in this blood red, charming theatre. 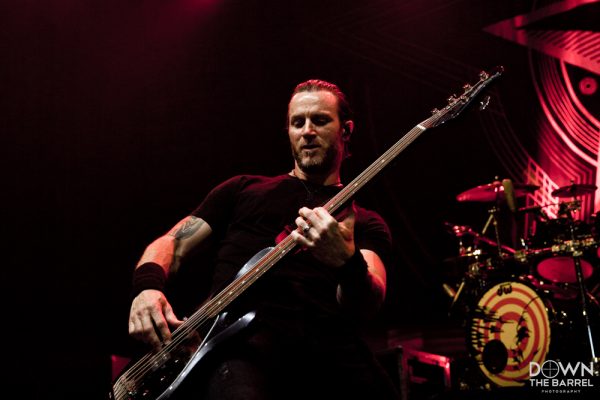 The groove of this band is in a live situation is real. Their energy was projected through a direct channel onto the crowd, like bows of skilled archers. Alter Bridge were playing with the precision of a clockwork made out of four people. These days, superb musicians who are not only technically brilliant, but also are bloodletting their soul are often taken for granted. This band has the drive of a merciless freight train, with everybody in the audience on board. With their tenfold focus and joyous grins, Alter Bridge have more an aura of professional musicians rather than that of “Rockstars” . When the lights illuminated the Olympia Theatre, the merry faces of hundreds of people were lit, reflecting directly onto the four members of the band (and some security guards). Alter Bridge is a live band you can easily lose your shit to, if they rock your goat, but they also invite you to lean back and imagine the tales they are telling. When Myles Kennedy firstly addressed the crowd, he said what was going through all the heads in the audience: “We finally made it… it’s so good to see you”. 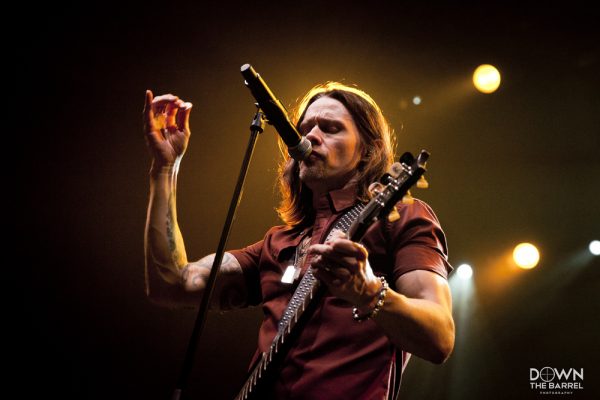 The S curve of the spines of the standing musicians are hugging the guitars, and gives them a laid back posture that shows they are not forcing anything. Even though they seem to play with gracious ease, the musicians are yet giving it a ton of heart. The musicians eyes are scanning the audience, making eye contact with every face he passes and a lovely moment of crowd interaction was when Myles Kennedy encouraged a little boy in the boxes, who was viciously air-drumming to their songs to become a drummer. He introduced the next song with “the most motivated man he knows” and Mark Tremonti took the myc. Damn those blessed musicians who also posses and control unique singing voices. A good rock show needs to feature a borderline cheesy acoustic song and the people were singing back at Myles Kennedy on the same noise level, so he let them sing while he played. 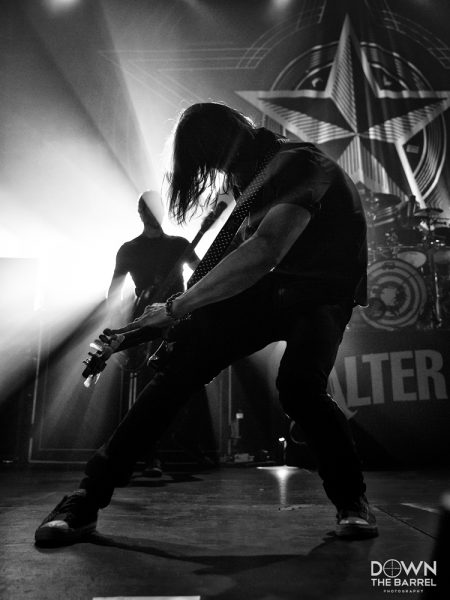 Even for people, who are fond of heavier and more complex and gritty kind of music that pushes the envelope, one cannot deny that the songs they were playing that night are straight up bittersweet honesty from the core. They appeal to a broad spectra of people, as children and vintage youth were present at this show, due to their tangible song writing – the ability to pack a range of emotions into a song and wrap it in an accessible mantle without losing the integrity of the primary ambition.

The band left Myles Kennedy alone a second time and he cheekily strummed the opening chords of The Beatles ‘Blackbird’. Mark Tremonti re-entered and diverts the flow into the chords of Alter Bridge’s ‘Blackbird’. The whaling guitars and creeping dynamics cradled your heart with gentle fingers and squeezed it lightly. Anytime the two shredders are blending and transitioning their within a song, it is as if the guitars are having answering each other.

You could think it was impossible to broaden the smiles on the peoples faces, but you could hear cheeks cracking as Myles Kennedy announced Alter Bridges return to Ireland, infesting the town on October 7th 2017! 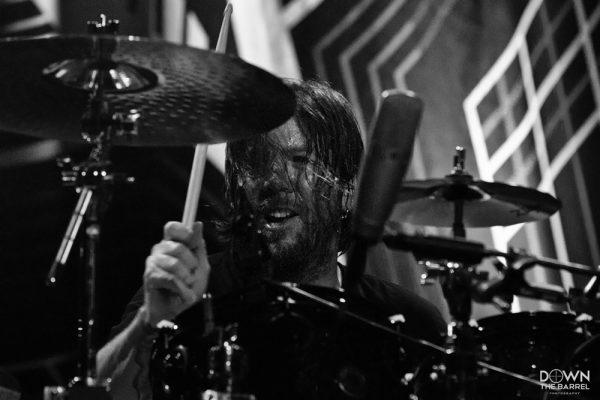 Maybe Alter Bridge felt like they owed Ireland the combined intensity of multiple missed out shows in one night – because that’s pretty much how it felt like.  Their encore featured four more songs and a striking 4 minute duet between the two guitars. Kennedy and Tremonti had a musical conversation, tossing ideas back and forth and picking up on each others musical statement. It was guitar wanking in the best way. At the end of their show, they flung picks and drumsticks and setlists made into paperplanes into the crowd with the mastery and aim of a skilled archers.

Do yourself a favour and don’t miss the next time Alter Bridge will grace the Olympia Theatre! Presented by MCD, tickets are on sale now and available here.

Check out the exclusive interview with Mark Tremonti here! 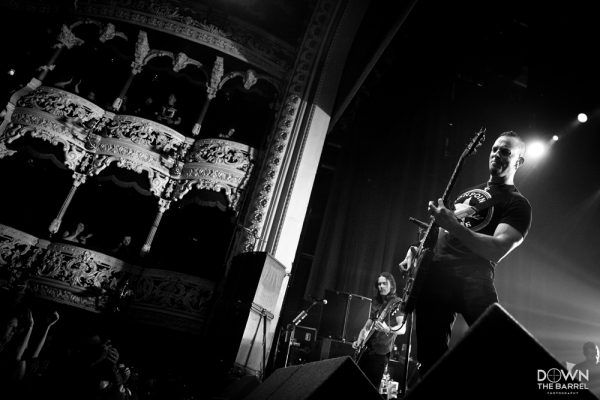