French metal masters GOJIRA have confirmed that they will be taking to the stage in Dublin’s Academy for one exclusive show on Sunday, 11th June. Tickets are scheduled to go on sale from Friday, 10th March via Ticketmaster and Sound Cellar. Details below!

Overdrive can confirm that GOJIRA will be appearing in the Irish capital for one exclusive show in The Academy on Sunday, 11th June. Tickets priced at €25.00 (inc booking fee) will be on sale from Friday, March 10th via Ticketmaster and Sound Cellar and are expected to sell out almost instantly. For your chance to win one pair of tickets, enter our competition below.

Having reached an all-time high with last year’s spectacular ‘Magma‘ release. Having conquered many stages across the globe, the French four-piece seem to be steamrolling to the frontlines of metals most popular contemporary bands.

This will be a quick pit-stop for GOJIRA off the back of their confirmed appearance at this year’s French Download Festival on June 9th in Paris. The band will then be heading out on tour with Metallica for a selection of North American and Canadian dates scheduled for late July.

Gojira are about to embark on a UK tour with special guests Car Bomb. Dates are listed on the graphic below. 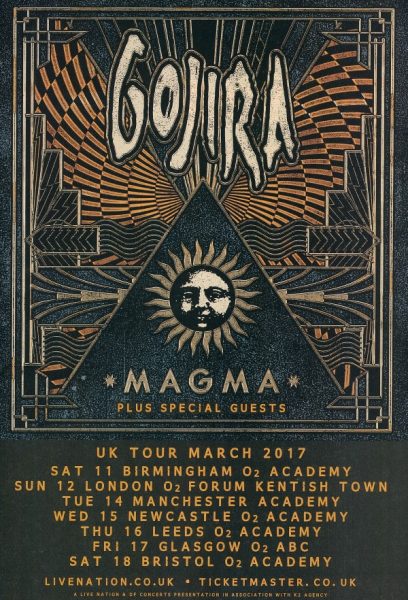 Magma is the band’s sixth studio album and one of the most successful since their formation in the late 90’s. To order your copy of Magma, click here.

Win one pair of passes to see Gojira in Dublin! Simply follow the instructions displayed on the graphic below. Access the official Overdrive Facebook page by clicking on the graphic. 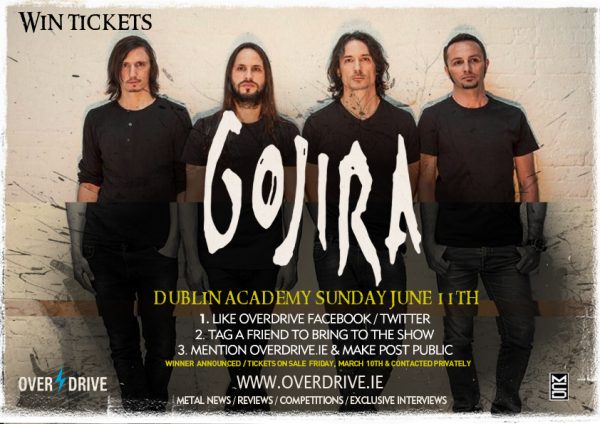