With reports of a new album in the works, fans of legendary L.A. crew, Guns n’ Roses were frothing at the mouth when news broke of a new song in their setlist. 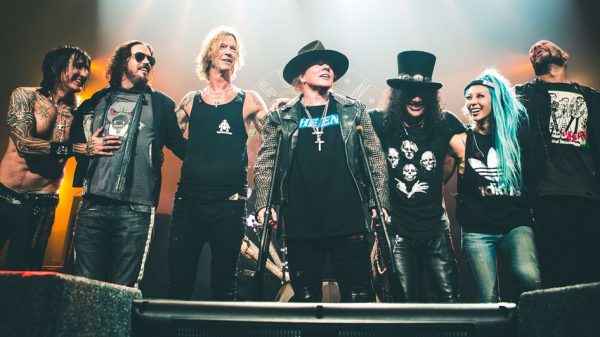 Ever since Guns N’ Roses reenlisted Slash and Duff McKagan officially in 2016, the band has been touring on nostalgia and good memories.

After talking about it for what feels like forever, it seems like there’s finally some new music on the way.

After performing the song at the band’s show at Boston’s Fenway Park, GNR has officially unveiled “Absurd,” which (as sharp listeners have pointed out) is similar to a song called “Silkworms” that was part of the now-mythical Chinese Democracy sessions (and was a lot more electronic sounding back then as well).

“Some of you might have heard this under another name, but this is really kind of absurd to try this,” Axl Rose said on Tuesday, introducing the song. After the band finished, he said, “See? I never run out of love songs. So you heard it here first: a new Guns N’ Roses song.”

Guns N’ Roses, which reunited three-fifths of its classic lineup in 2016 — Axl, Slash, and bassist Duff McKagan — after years of estrangement, played more than 175 shows on the ensuing “Not in This Lifetime” tour through 2019, and were set to continue into Latin and South America in 2020 when the pandemic hit.

Whether this means a new album is on the way remains to be seen. But Guns N’ Roses releasing new material out of thin air, well, at least it only took 13 years between new material instead of the 17 between the Use Your Illusion albums (1993’s The Spaghetti Incident? doesn’t count).