The undisputed Queen of Metal took some time out of her busy schedule to talk to Overdrive about her new album ‘Forever Warriors, Forever United’ which is released today via Nuclear Blast Records. 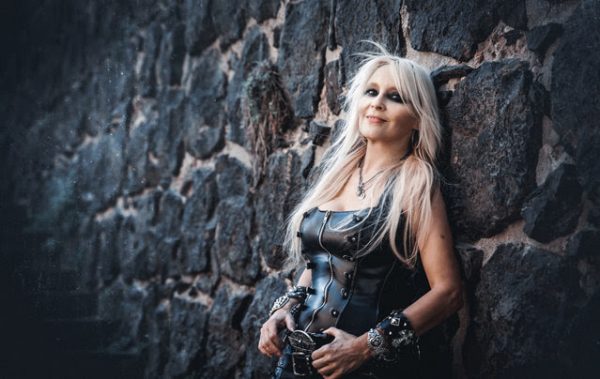 Amongst the hustle and bustle of the backstage media headquarters at Bloodstock 2018, there is royalty among us.

Entering the press area to many gawking eyes is the one and only Doro Pesch. A crusader of all things metal since 1980, Doro carries the very spirit of Heavy Metal in her heart and it flows through her body as blood does for us mortals.

Her new album ‘Forever Warriors, Forever United‘ is a statement of passion and unstoppable determination and deserves your attention.

OD – You’ve obviously had a tremendous legacy and have been part of one of the most exciting times in metal and here you are still going today. When you look back on your life do you think sometimes: ‘how did I get here?”?

DORO – I always wanted to play music since I was three years old and it’s always been a lifetime dream for me and I’ve just been so lucky that I have been able to tour with some of my favourite bands over the years. My first tour was actually with Judas Priest back in 1986 and to be playing with them today at Bloodstock is a huge honour for me. I’m hoping to get to hang out with them a little later on today.

The second tour that I did was with W.A.S.P in the UK  and my third tour was with the legendary Ronnie James Dio which was just beyond special for me. Then I went on to tour with Motörhead and Saxon, so as you can imagine I’ve been so lucky to have shared some time with these iconic and legendary bands.

OD – You’re heading out on tour again with Saxon at the end of the year also?

DORO – Yes, I can’t wait to get out there with my old friends. It’s kind of crazy to think that it’s 2018 and we’re still bringing heavy metal to the live stage. Those guys are the best and I’m sure the shows will be crazy. I really couldn’t ask for more right now. I always wanted to dedicate my life to the music and the fans and ever since I made that decision, it’s been like living in the best dream of all time.

OD – With the new album, ‘Forever warriors – Forever united’ did you find that you were nervous about putting an album out in 2018 as things have really changed in the music industry and are still continuing to change at a fast rate?

DORO – We had such a creative phase and I didn’t really have a problem with the writing. To be honest the real initiative for this album was when Lemmy left us. I was just so heartbroken that my dear friend had left this mortal coil that I said to myself, “I have to do something!” because you just never know how much time we have on this earth and we have to make the most of every waking moment.

OD – I believe there is a track on the album was written especially for Lemmy?

DORO – Yes! The song is called “Living Life to the Fullest” and it just came out so naturally. The lyrics and melody just flowed from me. I took that into the studio as soon as I could and to be honest the rest of the album just started from that point.

OD – So, really the catalyst for ‘Forever Warriors, Forever United‘ really stemmed from the tragic loss of Lemmy?

DORO – That track that I wrote for him, was the beginning of this next chapter in my life and the reason why the album is an actual reality today. I really wanted to do the best that I could for this album, not only for me but for Lemmy, the fans and for Heavy Metal in general.

OD – It seems that you had no problem with writer’s block?

DORO – We had so much material. I remember having at least forty to fifty tracks and called the record company and said, let’s do this! I mean, this new album is technically two albums in one (laughing)!

When I called the record label, I just said: “I have all of these quality songs, just packed with great melodies and I really want to do a double album!” they were a little concerned because of the way the record industry has changed with people not really buying records anymore, so we all thought about it and a couple of months went by and they said: “Okay, let’s do it!” and I was so happy.

OD – When you got that news, I’m sure you were over the moon. Did you have ideas of what you wanted to do with some of the tracks at that stage, with regards to he duets etc?

DORO – Yes, we had loads of idea’s of some cool covers, duets and loads of special stuff that I wouldn’t normally put on a regular album.

OD – There is no question you have lived a very extraordinary life so far, have you considered putting all of this into a book?

DORO – I actually started writing a book a couple of years ago and then I thought: “It’s gonna have to be two books. One that is normal, and the other about how it REALLY was because some of the things that happened over the years would not be too far off from a horror story. I was actually having problems sleeping at night because of the memories that had been dug up with the research. It was all a bit too much for me at that point in my life.

Some of the memories were just too hardcore and intense for me and I just made the decision to stop and put all my energy into making a new record, which was the most positive thing for me to do. I just wanted to get on with writing new music, booking festivals such as this (Bloodstock Open Air) and prepare a huge headline tour for next year.

OD – So, you just wanted to concentrate on the future, rather than the past?

DORO – Yes, the past was not really all so easy for me. It’s kind of like thinking about your ex-lover in a way (laughing). There was a reason why things were not working out in the past and when I was trying to do the book and had to think about all of that stuff, it was like: “Oh no, not now!”

OD – It’s clearly not the right time for you to do this book, but do you think that it will ever happen?

DORO – Yes, I’m not gonna turn my back on the idea, it’s just that I need a little more time to get to terms with everything. I can tell you this, the story is one that will need the reader to buckle-up as it’s a rollercoaster ride for sure! (laughing)

OD – One of the most iconic album covers for me, when I was growing up, was ‘Triumph and Agony’, and yet again, you have an incredible cover to the latest record. Is the cover art something that you’re very passionate about? 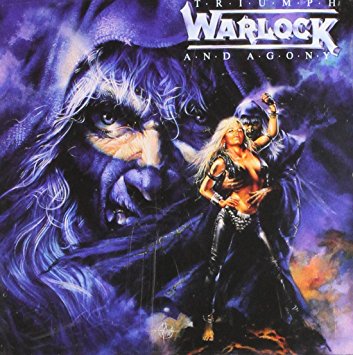 DORO – Yes, usually I have this painter that I get to do my covers. He’s a British artist that lives in France. His name is Geoffrey Gillespie and he created the cover for “Triumph and Agony” in 1987 and I just loved his work from the beginning. For this album, I had a demo track called ‘Soldier of Metal’ which I sent to Geoffrey telling him that I had a new album in the works and to come up with a concept.

I told him to go with a kind of Mad Max theme and when he came back with the overall concept, I just loved it from the moment I saw it. It was just so dead-0n! The feel of the cover is just totally what the album is about and I couldn’t be happier with the way it looks.

OD – As far as the touring schedule for ‘Forever Warriors – Forever United’ goes will we be possibly seeing a details UK / Europe tour in the near future?

DORO – Yes, so we are heading out with Saxon at the end of the year and then we do our own tour in March 2019. We will be adding loads more dates over the next few months as there is so much excitement over the new album and lots of promoters are asking for dates now which is just incredible.

DORO – I would say: “Do everything that you have done, go at everything with full force, but one thing that’s very important is to make sure you read and understand any contracts that you are signing!” If I was told this advice in my past, it would have saved a lot of heartache and stress. Just get a lawyer to look over the contracts and make sure you’re not getting ripped off.

In these situations, it’s very easy to almost sign your life away without knowing about it! When I was a teenager I was so naive and really believed that everybody in this business was a “friend“. Little did I know that was not the case and most people are just in it for the “business” side of things and they really don’t care about the actual artists. It can be very brutal out there. Other than that, I would tell myself to have fun, do everything possible and enjoy the ride, because it’s been a wonderful journey filled with all kinds of emotions, both good and bad.

OD – Of all your cherished items from over the years, is there anything that is very special or sentimental to you that was given to you as a gift, or perhaps an item that reminds you of a very special time in your life?

DORO – Actually, I have a few things from Lemmy and from Ronnie (James Dio) that are very, special to me or should I say ‘were’ very special to me. When I was living in Manhatten, New York the attack on the Twin Towers just totally freaked me out and I moved to Long Island and since moving there, I was hit by a hurricane twice and everything is gone!

The first time the water was about one meter high and the second time it was about one and a half meters high and everything was destroyed. All those very sentimental gifts that were given to me by Lemmy and Ronnie are now somewhere in the ocean. They are gone forever but just like both of those guys, they are always there in my memories and in my heart. Just having the memories of being in the studio together and on tour together is something that I will cherish for the rest of my life.

I always thought that I was so lucky to have been involved with these both Lemmy and Ronnie, not to mention all the other fantastic bands that I’ve shared a studio and stage with over the years and just want to give that back to the younger bands with full energy living life to the fullest regardless if it’s a festival, a small club or stadium! This is my life and I’m so grateful for every moment of it! 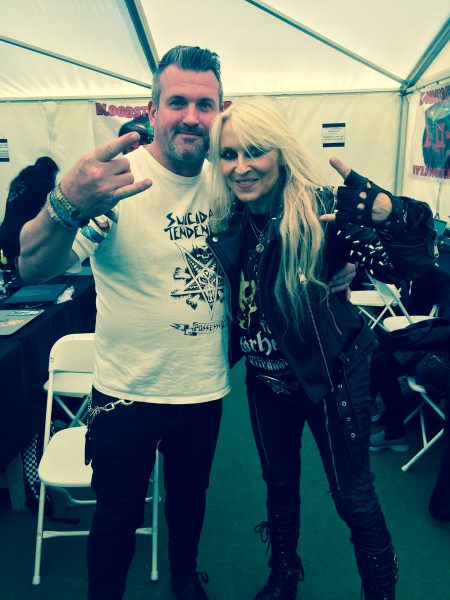 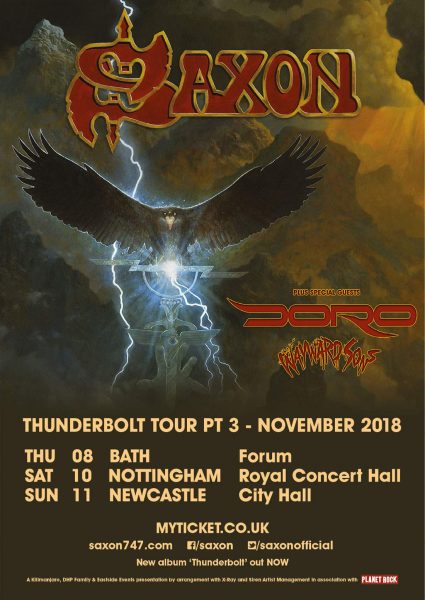