With a new album in the chamber ready to blast into orbit, Ireland’s rising metal crew, WORDS THAT BURN have today, (Tuesday, May 21st) finally released their new video/single! Watch the Irish exclusive premiere for ‘Riptide’ below;

Dundalk four-piece WORDS THAT BURN are gearing up for the release of their second studio album ‘PYRES’, which will be released independently on June 11th.

Overdrive can now share with you the Irish exclusive premiere for their new single/video ‘Riptide‘. Watch/listen to the track below;

Overdrive spoke with vocalist Roni Vox about the new single/video;

OD –  Give us a background to the video/ lyrical concept for “Riptide“.

RONI – The story of the song is about an experience I had in Australia where I almost drowned. It went beyond the panic point where it’s all kicking and gasping to a lovely serenity. It was genuinely quite peaceful accepting the inevitable.

So, the lyrics are heavily influenced by that. We wanted to portray that fear to acceptance process in the video. It’s quite a grim twist on facing demons with a twist. Which is a weird match to the song which is quite uplifting musically? 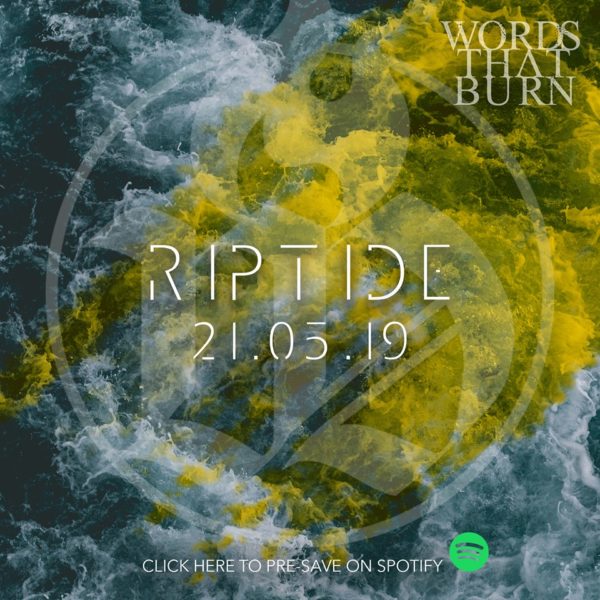 OD – In the video there are a few scenes with you in a coffin filled with water, how did you feel about shooting those scenes, as I’m sure it was a little uncomfortable, to say the least?

RONI – Yeah, I didn’t like that. I don’t think anyone should be in a coffin until its time for the big dirt nap. It was a bit claustrophobic and to fill it up with ice cold water just added to the fun!!!

The hose we had wouldn’t work so I had to lie in the coffin for like 30 minutes while the lads poured bottles of water over me. By the time we were ready for the shoot, my body temperature was dropping fast so we did it all in one take and it looks frantic as fuck…. So totally worth it!

OD – As far as videos go, ‘Riptide‘ seems to be a leap into a more intense visual concept than your previous videos. Discuss…

RONI – We wanted to do something that was a bit more gritty than we’ve done previously. Something that makes the audience feel a little uneasy watching but at the same time kept them engaged with the story. So its quote fast paced but has its “WTF” moments.

OD – With regards to the album, how has the reaction been from the previous two singles and are they a good representation of what to expect upon its release?

RONI – We are absolutely blown away by the response to the last two songs. Like, floored. We really didn’t expect the feedback and messages n shit that we got particularly about the last single “Arise”. That was a bit surreal and very humbling. It’s not very often I have proud moments in my life – but these wee blips on my timeline are certainly ones that have a huge impact on me.

But yes, they are a great representation of how the album is going to sound. There are a few curveballs in there tho, to keep ye dancing!!

OD –  Should you have to pick, what is your favourite track from the new album and why?

RONI – Personally, my favourite track is the album closer, “A Mortal Call”. It’s a fucking rollercoaster and it’s a very fitting way to put the album to bed. I think its one of the most exciting tracks as you don’t see it coming. Every time I hear it I’m back in the room writing the lyrics and they get me every time. The song is more real to me than any of the others so it will always be my stand out track.

Catch Words that Burn on June 12th with Alien Weaponry and Dead Label, June 29th in Belfast’s Limelight 2 and also at this years Knockanstockan Festival on July 19th.

Down the Barrel Photography 2019