Kerry King – “Dave Lombardo shot himself in the foot!”


SLAYER guitarist Kerry King was the featured guest on “The Steve Austin Show – Unleashed!” podcast last week. You can now listen to the chat using the audio player below. 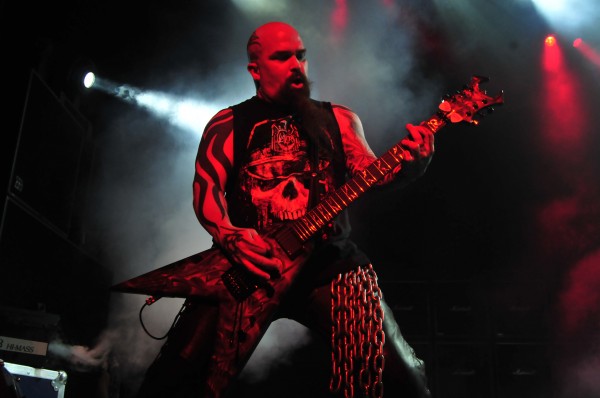 King: “Me and [late SLAYER guitarist] Jeff [Hanneman] would go hang out and see bands. We saw METALLICA at the Woodstock in Orange County, of all places, and we were blown away. We were already into MOTÖRHEAD and VENOM, and there was a lot of talk of the METALLICA guys. So we were, like, ‘Let’s go check this out.’ And they were doing what we were doing the way we wanted to do it… We just weren’t there yet. They were probably six to eight to twelve months ahead of us, just with shit-togetheredness. Even back then, I look at [then-METALLICA guitarist] Dave Mustaine, and to this day, I love him as a guitar player; he’s one of my favorites. And then I saw him playing and it just blew me and Jeff away that he was just ripping solos and he wasn’t even looking at what he was playing. And we were just like, ‘Man, that’s awesome.’ And were just into it. Me and Jeff were six months apart in age. We were just like the same person.”

King: “When Dave was in [the band] this last time, I figured I’d be on the stage with him until one of us fell off the stage, dead. Things change. He got some bad advice and listened to some bad advice, gave us an ultimatum ten days before we went to Australia [to do the Soundwave festival tour]. And I said, ‘I can’t have this over my head.’ And I feel bad for Dave to this day; I really feel bad for him because he shot himself in the foot. Maybe he thought he had the upper hand, but you ain’t gonna get me…. Before I got home, I knew exactly what I was going to do for Australia.” 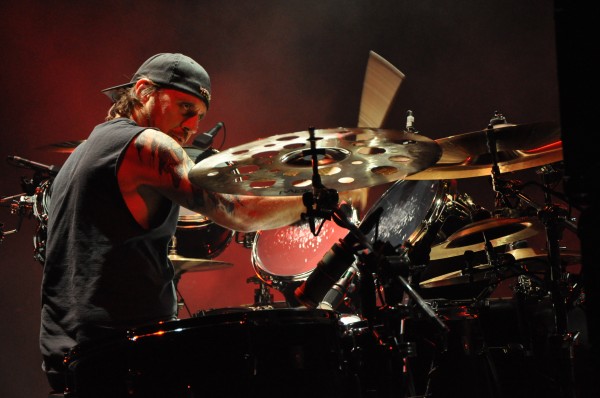 On how SLAYER has managed to maintain its camaraderie within the band for more than 30 years:

King: “The only thing that we’ve done to separate each other purposely is when Tom [Araya, SLAYER bassist/vocalist] started coming out with his family, I don’t know, maybe ten or so years ago. And I said, ‘It’s probably a good idea to get your own bus.’ Because you never know what’s gonna be going on on our bus. For the band, kids keeping you awake all night — if that’s what would happen; kids stumbling in on something they really don’t need to see, that’s something. But that’s the only thing. We fly together, we’re still on the same bus. We take off on the same bus in a few days. [Editor’s note: The interview was conducted a few days prior to the start of SLAYER’s current North American tour.]

“What took me the longest time to figure out for myself personally was what not to say to people. You have your opinion, someone is pissing you off that day? You don’t need to say it. Shut up, get on with your day, tomorrow’s a new day and it’s all gonna be fine. And, you know, there are so many bands that break up, and the individual doesn’t usually have the talent of the whole.

“We’re good at what we do, we’ve got a very strong brand, a very strong following and it would be stupid [for us to call it quits].

“The only reason I would leave SLAYER today is if Tom said he was done, ’cause then it’s just me. Or if I was done and it was just Tom, I don’t think Tom would wanna do it. It’s now just the two of us.”