Khemmis continue their ascension to great heights with album number four. And what better way to find out all about ‘Deceiver’ than a proper chinwag with Ben Hutcherson about how this album literally saved his life. 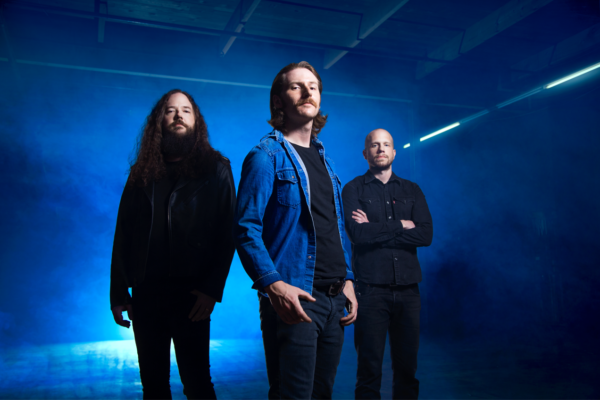 There are few artists that can enjoy the warm glow of a near-perfect discography.

Khemmis are undoubtedly one of those bands’. Overdrive caught up with Ben Hutcherson from his home in Colorado to discuss the life-changing journey he and his bandmates have undergone since the world was cast into the shadows of a global pandemic.

OD – With such a fractured 18 months of stop-starts in the music industry, just how long had you guys been working on ‘Deceiver‘, and at what point did you feel that it was a fully rounded body of work?

BEN – Because we are a guitar-driven band, everything really starts with the the ‘God-Almighty Riff’ so, we started really stockpiling stuff as far back as 2019, but that was just a matter of whether I or Phil [Pendergast, guitars] had anything worth keeping.

So, really we began really working on ‘Deceiver‘ in earnest, back in Spring of 2020. All of our albums are very emotional affairs, and we always mine our own personal experiences, and our own journeys in this world and none more than this album.

BEN – Well, for example a lot of people will interpret our other albums through the lens of what ever was happening when they came out. Like say ‘Hunted‘ [2016], or ‘Desolation‘  [2018], and they will assume that it’s about something political, or whatever is happening during the time of release.

So, now that ‘Deceiver‘ is finally coming out now in 2021, people will do the math and figure out that we wrote/recorded it in 2020, and the question is: “Well is this about living through 2020?” and you know what? You’re God-Damn right it’s about surviving through what has been a nightmare for so many people. As we started writing this album we found two big things.

The first being, we had all grown to be very disconnected with everything. With each other, with the band…do you know what I mean? As a result we found that we had to do some work internally before we even considered writing a new album. To be honest, there was a time where it was looking like there wasn’t going to be a new record…let alone a band anymore.

So, through having some long overdue and healthy conversations between the three of us, and getting our own preverbal houses in order, we managed to move forward. I can only speak for myself here, and say that from the beginning of last year, I was formally diagnosed with a mental illness, and I live my life in a way where I could say: “I have depression sometimes”, or “I get depressed sometimes“… but I got to a point where I no longer wanted to live.

Thankfully, my psychiatrist, my amazing wife, and my therapist helped me get to a point where I found a better place, and with that help, plus the right medication, I managed to turn a corner and get through the darkest moments of my entire life. Which I’m very grateful for.

The other guys had their own journeys also with mental health. They had to figure out stuff with their families/home life, etc. When you think about it, there’s no better time to look inward and take stock of what’s going on in your heart and your mind, when you’re in lockdown as you can’t go anywhere. So, I guess there’s a silver lining there in that regard.

If we hadn’t have been forced to stay home and take stock of things, we would not be having this conversation about this new album. Khemmis would have just burned out and that would have been it. Instead, we were given an opportunity to really look at who we are, and ask ourselves: “What does this band mean to all of us?” and “Do we really want to keep this going?”

We realised that being honest about what this band means to each one of us, and also collectively, that really gave us a purpose to keep moving forward and it also gave us a sense of renewed joy. Us having that understanding…that connection with what we’re doing translates over the people that enjoy our music, so we really had to think long and hard about the impact of what we were going to do.

The music the Khemmis makes is not just simply music that people can headbang too! Don’t get me wrong, there’s nothing wrong with that. [Laughing] It’s just that  we’ve had a lot of people that have approached us and sent us messages telling us that our music had helped them through a very difficult times in their lives, and that’s a huge responsibility when you think about it.

So, when it came to time to sit down and wright this album after we had come to terms with our demons, we had made a decision to stick to our mission statement which is to be honest and make music that is meaningful to us and also to the people that appreciate what we do.

OD – Did this impact the overall writing of the album?

BEN – When it came to that point, after we had come to the conclusion that we really had a lot more to give to the world. We needed to let these songs be what they wanted to be. We didn’t want to restrain the creative elements.

We needed to liberate ourselves from the internal criticism where we were scrutinise our own music thinking: “Oh that’s not ‘Doomy’ [sic] enough“, etc. We know what we are capable of doing and thankfully we came out the other side, and that’s what people hear when they press play on ‘Deceiver‘.

OD – In light of what you just told me, how do you feel now when people tell you that your music has lifted their spirits and helped them out of a black hole? Especially since you essentially created ‘Deceiver‘ from a very venerable place. It’s the definition of turning lemons into lemonade really. You took something negative and emotionally pulverising, and created something that gives other people joy.

BEN – [Long pause] I think that for all three of us, we realised just how precious it was to us. Having this outlet for working through the heaviest parts of our lives, for me it’s been working through mental illness and sobriety…and I don’t want to speak on behalf of the other guys, but dealing with things like family trauma, etc.

One of the themes that runs through ‘Deceiver‘ is, are we destined to repeat the same mistakes as our Mothers and Fathers, and are we condemned to a life or “destiny” that is strictly the genetic heritage of our families. We all come from…let’s say a “rich history “of mental illness, for example in the case of my family, there is a history of addiction.

Creating this band for us, has really highlighted how fortunate we feel about creating something that can really speak to other peoples experiences. If we had set out with that very purpose in mind, it would feel so fucking contrived and it would never work, because you can never guess what’s in other peoples hearts and we can never predict what the fans or critics will respond too. All we an do with any kind of creative endeavour, is just do our best and let our passion come through.

OD – When you finally got your hands on the physical copies of the album, was it an emotional experience for you?

BEN – When Nuclear Blast sent me a box of the fist pressings of the album…I was…,I felt so overwhelmed. I’m standing there in my kitchen with my wife, my dog, and my cat. And finally, to have this tangible thing in my hands…it was a very surreal experience and it moved me to tears. Just knowing what the last few years had meant to all of us, as well as to me personally…well, let’s just say there are versions of this world where I’m not holding this record.

I looked at my wife and I said: “I’m not sure if I should holler out with joy or if I should cry“, and my amazing wife just said: “Why not do both!” So I did. 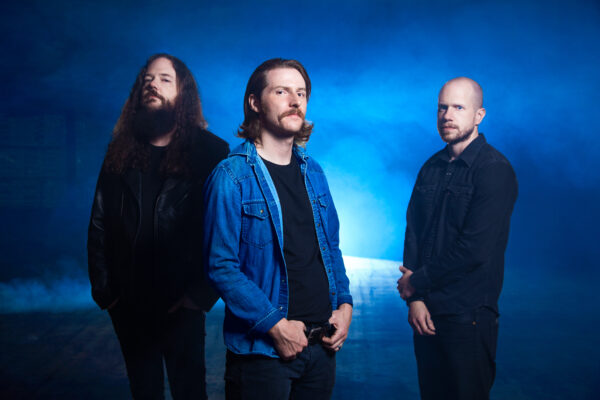 OD – Would it be correct to assume that ‘Deceiver‘ is a huge milestone for you personally and dare I say, the bands’ most important release, with regards to what you’ve just told me?

BEN – Oh… yes! 100%. ‘Deceiver‘ is our number one album for all three of us…for sure! There is so much emotion and feeling compressed into that album. Emotions that represent the darkest of times, but also a very important re-birth of positivity for all of us.

OD – Considering the happy outcome of things, why did you call the album “Deceiver?”

BEN – Well… the idea of ‘Deceiver‘ works in a many different ways. A lot of this album was really about how did we end up where we were prior to recording, and more importantly, how did we manage to come out the other side of this whole experience.

And what we came up against was a tidal wave of messages that are reinforced culturally about suffering, and about the worth of human life that we are inundated with from the moment we are born and the way the suffering is fetishised. Especially in music, you know… the way the tortured artist is constantly portrayed?

So, what does that mean for people who are living with mental illness, or living with decades of unburdened trauma. We considered how dangerous and disingenuous that is. The idea that you need to suffer more in todays standards, is ludicrous, because life is suffering. Every day of life is some kind of suffering. It’s reinforced in media, religion, and in most homes.

Why are we living in this world where we accept these messages about suffering, and why do we continue to live by these standards. It’s deception. To quote Napalm Death ‘You Suffer, Buy Why?‘

We have the ability to change the way we live our lives, and in some cases all we have to do sometimes is just ask for help. This is where the title ‘Deceiver‘ comes from.

OD – Looking at the tack listing on the album, is there any one track that is a little bit more special than the others?

BEN – One one hand, you can ask me this question tomorrow and I’ll have a different answer [Laughing]. But right now, I’d have to say ‘Living Pyre‘. I had been on psychiatric medication for about six or seven weeks at that point and was just starting to feel a bit normal again.

That song was the turning point for the band, for the album and we were just starting to open up with these deep conversations with each other. I felt the first bit of ambient joy at this point and I was sitting in this very same spot in my office where I’m talking to you know and I just picked up the guitar and my hands just did their own thing. It was like a presence came over me and presented these chords sequences to me right then and there…out of nowhere.

I spent that entire day writing and refining that song and probably came up with about 80% of what you hear on the final album version. I feel that from that moment…that song, we really connected and got back in that creative zone that we continued to harness for the rest of the writing sessions.

Khemmis ‘Deceiver‘ is out today via Nuclear Blast. Order your copy here. 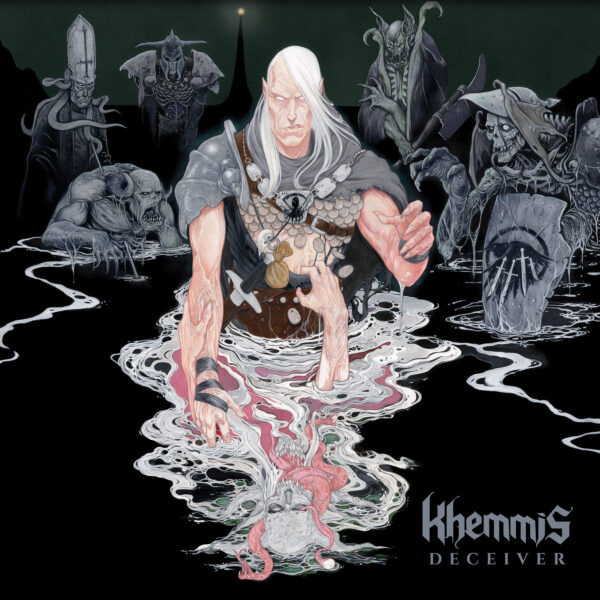