KREATOR – ‘We tried the orchestration on the new album and it just sounded like Star Wars” Sami Yli-Sirniö.


Given the longevity of KREATOR’s career, one could be mistaken that the German thrash icons have softened up over time and are pandering to the masses with a watered down, ‘thrash-lite’ version of their former selves. Wrong! Harder, nastier and faster than ever, KREATOR continues to rip layers of skin of the faces of multi-generation metal fans and have no plans to give up anytime soon. Guitarist Sami Yli-Sirniö sat down with Overdrive to chat about the bands recent UK/European tour, the new album and plans for the rest of the year!

KREATOR’s latest release ‘Gods of Violence’ emerged earlier this year to a cascade of glowing reviews across the metal world, leading to the German thrashers smashing their way through Europe with Sepultura, Soilwork and Aborted.

Upon their Dublin performance, guitarist Sami Yli-Sirniö took some time out of his day to discuss all the latest with the band’s new album, their touring plans for the rest of the year and much more.

Sami Yli-Sirniö wanders into the Vicar Street backstage area, grinning from ear to ear, chatting about a variety of topics from his recent sound check in Dublin’s Vicar Street just a few moments ago to the tasty catering on offer, courtesy of promoters, DME Promotions. It’s safe to say that Sami is feeling relaxed and eager to get on stage tonight yet again to do what he was born to do.

Check out ‘Gods of Violence‘ on the Spotify link below while you read our interview!

OD –  Firstly, congratulations on the new album ‘Gods of Violence’! Can you talk a little bit about the writing process, about what approach you had to the writing and concept of the new material?

SAMI – The writing process was pretty long, as it always is with Kreator. It was four or five years, but it wasn’t continuous. This was when Mile (Petrozza) – the primary songwriter/lyricist – sent over the demos and asked if anybody else has something, some ideas… and I sent something over and so did everybody else. So that’s how it started, and afterwards, we met as a band in the rehearsal room the old-school way and started throwing stuff away and adding stuff. 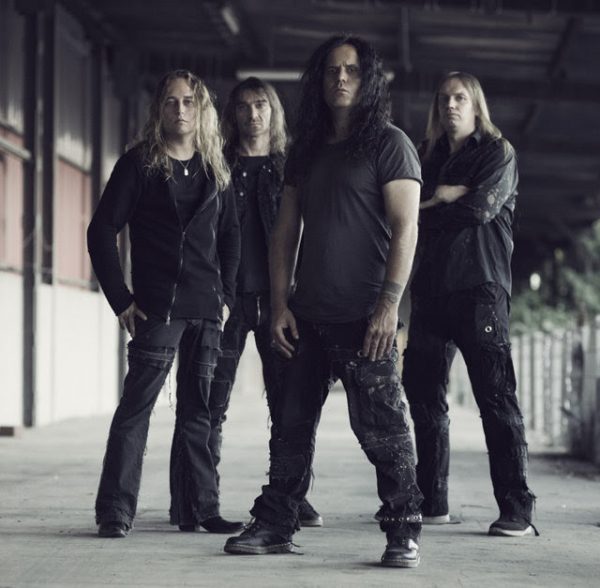 When you meet up together as a band, new ideas come up automatically. Then we did a demo with the guy who’s actually doing our monitor sound tonight, to find out if it’s good enough for ourselves. That one we sent over to our producer Jens Bogren and started editing it and he had plenty of ideas. Sometimes we listened to him and sometimes we didn’t! After that, we headed over to Sweden and we were there for like 5 weeks altogether, and we decided to work the second time with the same producer because we were very happy with how ‘Phantom Antichrist’ turned out, and then also, when you start knowing somebody a little bit better, you don’t need to be so polite anymore and you can say your opinion more directly and not worry about hurting anybody’s feelings – it goes both ways. It was a very nice time – a very music-filed summer for sure. We were there for the whole summer.

OD – Although it took a lot of time to complete ‘Gods of Violence‘ to where you were comfortable with it. When you look back in hindsight, did you enjoy the process of recording, as it seems that it could be a dreadfully monotonous process at times?

SAMI – In some ways, it is, because you always have to start from nothing. In the beginning, there is emptiness and it took a long time. But of course, first, we thought “Is it relevant to release an album at all?”, and we thought “Yeah sure – why not?” The catalyst for us taking on this album was based on the success of ‘Phantom Antichrist‘ which was so well received; we thought “Yeah we’ll give it another go.” 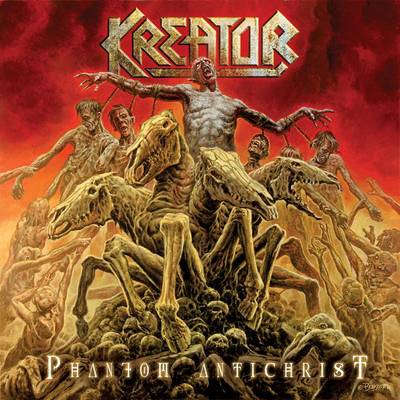 OD – Mile had reportedly said in the past that he was looking for “new sonic solutions with this album’, and ‘broadening the sound”. You have also commented on the new album by saying that you would “put the bones of something together and dissect it, then dissect it further” – was that a common process?

SAMI – Yeah, that’s pretty much the way we do things with Kreator. It takes a long time for us because we don’t like to rush in and frantically write and record. The entire process has to be natural for us. We really try to broaden the sound with each record, I guess we always try to do that with every album, but this time it was with different things. This time, for example, there’s this intro track called ‘Apocalypticon’ and it was clear from the beginning that we wanted to try some orchestrations this time around. We tried it but it just sounded like Star Wars! So we were like “Noooo……..”(Laughs)

OD – When you say you did it yourselves, what do you mean?

SAMI – It was just some orchestration samples. But since Jens Bogren knew the guys from Fleshgod Apocalypse and they’re total experts – they really know how to do that stuff really well, so we thought “let’s give it a go!” When they sent it over, we were like “Wow! That sounds so good! Let’s give them a chance to try it on a couple of other songs as well”. But their input is mostly dominant in that intro track and it just works so well.

OD – There’s a hell of a lot of variety on that album. Was there anything in particular that you guys were listening to that might have indirectly influenced you?

OD – Working with Jens again on ‘Gods of Violence‘, must have given you a head start in some ways, especially as you wanted to do something a bit different this time around. I believe that he is known for having a vision of how he wants something to be. Did he get the concept of what you were trying to do this time around or did it take a while for both band and Jens to find common ground?

SAMI – This time around we didn’t have to be so polite to each other anymore (laughing). Sometimes we listened to his ideas and sometimes we didn’t. But he has some real great ideas. I mean, he’s a guitarist himself, he’s very musical guy and it makes sense for us to work with him because we need somebody outside of the band as a producer to give a fresh set of ears in a neutral approach. Some people can do it by themselves, but Kreator will always seek to find counsel from outside the band with producers etc, because it brings something new and that’s really what we strive for.

OD – Since the release of the album in January, have you been slowly introducing new material from the album into the set list, or did you just decide that you were sticking with a selection of new tracks for the tour? 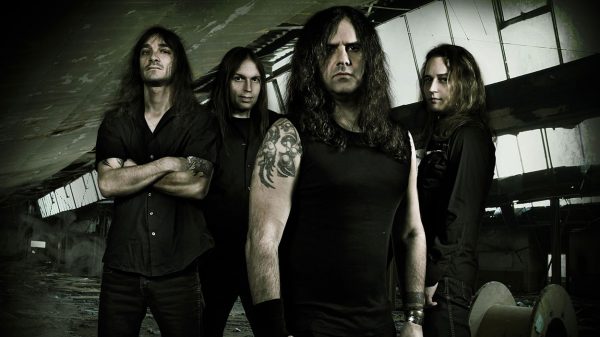 SAMI – Oh we just took it from the first gig – put 6 songs in the set! But it was hard to decide which ones, but when the summer festivals come along, we can play different new songs from the new album

OD – Looking back on the legacy of the band, there are 14 albums there to choose from. You said that there are 6 tracks from the new album in the set. How the hell do you all come to a decision about what to play?

SAMI – (Laughing) Well, yes it’s been a little difficult at times. We plan the setlist around the production ideas because it’s important for us to have the right kind of drama to it. We have a lot of visual stuff going on during the show, so if we keep changing it around, it will look a little out of sync. When we get to the festival season we are planning to play more of the new songs at festivals and stuff so don’t miss that!

OD – Let’s talk about the artwork of the new album. When you were coming up with the amazing concepts, do you say “Here’s the tunes – have a listen and let’s see what’s in your head!”, or is there a design process or structure there?

SAMI – He (Jan Meininghaus, the art designer for the album), heard the demos, so the music was his inspiration and he has an idea of what our music is like! But to be honest, Mile was in contact more with him, so I don’t know too much about it.

OD – You personally have been playing music most of your life; you have a track record with Waltari and Barren Earth, and now with Kreator, so obviously you’ve seen plenty of changes, as we have, in the industry.  Do you feel that things are in a good place now with recording records and selling them?

SAMI – Well I know that there is an increased interest in vinyl, which is nice. I mean, directly after a show, people want to have their vinyl signed. But still, the music business is at a point of change. I dunno where it’s going. But the positive thing is, for example, me living in Finland, there are more clubs, there are more shows than ever before, so that means everything is fine.

OD –  That’s the opposite of what’s happening in the UK – venues are closing!

OD – Being on the road, you would have bands opening up for you. Is there anything that sticks in your mind like a good band you’ve seen, or something you’d like to share with us? An unsigned band or something? 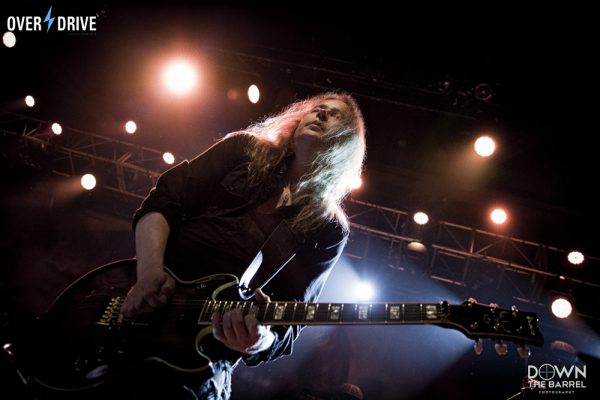 SAMI – Oh yeah! All the time! Especially when you talk about what’s the state of the music scene today! One thing is that there are so many bands, it is ridiculous. But it’s a good thing. I don’t see it as a bad thing, but there could be a better way to spend your time than to make music and if they are successful enough, but that’s not important.  Sure, you see bands all the time – I can’t think of any particular name right now, but it happens all the time.

Get our full review and photo gallery from KREATOR in Dublin’s Vicar Street on March 1st, 2017 here.

Kreator are currently on a U.S tour with Obituary, check out the dates on the graphic below.

Catch Kreator on the mainstage at this year’s Bloodstock Festival. Tickets are on sale now and available from this link.