Kvelertak talked to Overdrive about past, present and future!


Erlend Hjelvik (Vocals) & Maciek Ofstad (Guitars) of Kvelertak took some time during their recent mini-tour of the UK with Empress and WOUNDS to talk with Overdrive about a possible new album, flying on TOTO’s private plane and meeting James Hetfield! Get stuck in! 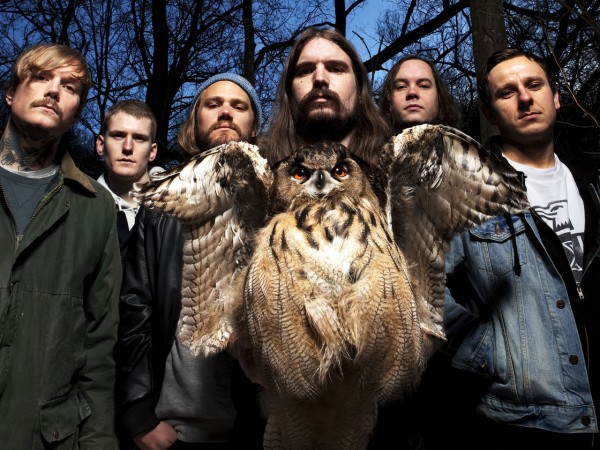 Overdrive arrives in the almost sleepy town of Wolverhampton to catch up with the lads from Kvelertak on their short but sweet tour, before they embark on a rather nice American tour with the mighty Mastodon and Gojira. We are greeted by the bands tour manager and led to the confines of the bands tour bus, where we find Erland and Maciek relaxing with some Mortal Combat on the games console and a few cold beers.

OD –  “Mier” is your second release, how did you approach the recording of this album and was it very different from the first recording experience?

Erlend – Yea, it was different. With the first album we basically just recorded all the songs we had been playing for years. So we had to make a new album from scratch, we spent much less time on it.

Maciek – Well, we started playing a few new songs before the album was done, so I guess it got written in about a year. We had four months at home in Oslo that we were actually working on the songs to try and get it finished. It was pretty hectic from just touring, touring, touring and then getting home and having four months to put it all together. It turned out well and we are all happy with the finished result. 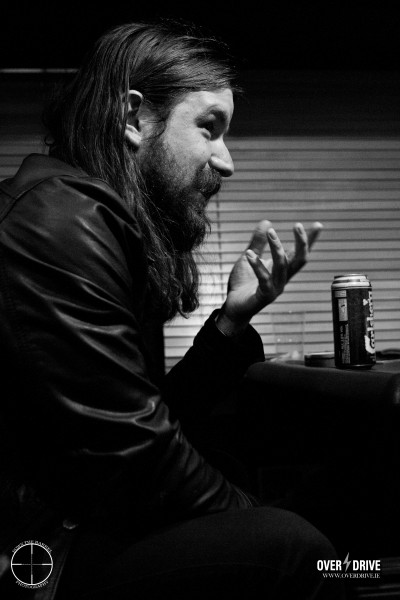 OD –  There is a very unique sound to Kvelertak that is completely original. It would seem that you take great care in considering various styles and incorporate them through the music. Can you elaborate a little more on how you have crafted such an original sound?

Erlend – It was a lot simpler when we started out with the band. We just had a mix between Rock and Metal, but since there has been much more influences in the music and I’ll credit that to out guitarist Bjarte Lund Rolland. He is the main song writer in the band and he basically listens to pretty much everything and that’s why I love his song writing. He can fit all these different elements in there and it never sounds forced. He always thinks in terms of whole songs, if you know what I mean.

Maciek – Yea, it just comes naturally for him and never forced.

OD – With all of your releases, you have used the artwork of the incredible John Blaizley, how did this come about?

Erlend – He actually contacted us! Apparently this is the first time he has ever done that with any other band besides his own (Baroness). What happened was, he got a promo before we released the first album from his tour manager and he just liked the music. He then sent us an email telling us that he really liked our band and if we ever needed any artwork done, that he would love to do it. So, we asked him to do the artwork for the first album and it just happened. We were all pretty blown away, as we are all big fans of Baroness and especially of his artwork too. 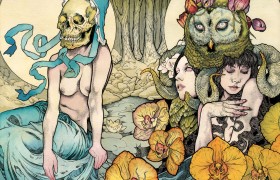 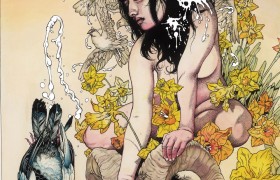 OD – When you are creating the cover artwork, was John given 100% freedom or did you have an idea of what you wanted?

Erlend – I just gave him the lyrics and explained what the songs are about and we just let him do his thing. That’s pretty much how we like to do things when it comes to music videos and shirt designs. I feel that it just get’s better if you give the person doing it some freedom.

OD – Can you explain the finished artwork on both of the album’s and is there a connection between the two images?

Erlend – I don’t think the first and second album have much to do with each other. It’s mostly lots of different elements from the lyrics that John blends in together. I can recognise some stuff that relate to the lyrics when I look at it and that’s cool.

OD – With the surge in vinyl popularity, there is more focus on album covers and packaging for records, as we spoke about with your own releases. Would I be correct in assuming that you are vinyl collectors?

Erlend – Yea, I have some. I like to collect some pieces but since we have been so busy on the tour I’m kind of worried about bringing them home because sometimes they get bent in my luggage. I guess I will have to get some special luggage to carry it with me. (Laughs) 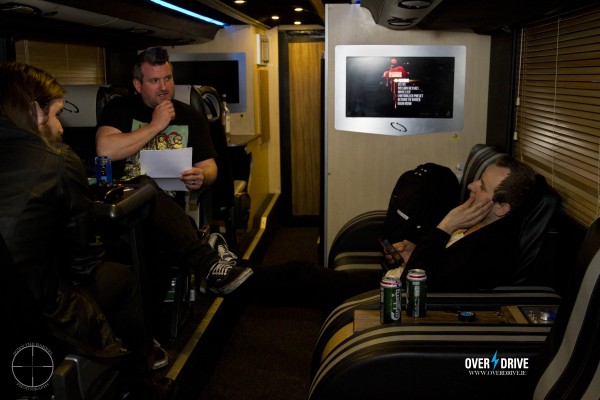 OD – Are there any particular album covers or music artwork that you admire or stick out from memory?

Erlend – Probably the first artwork that I can remember from when I was five years old and was living in Holland. My friend next door had an older brother and his room was just covered in Iron Maiden posters. That’s the first thing that I remember in terms of album covers.

Maciek – The first one that I remember is my Uncle had a Metallica poster with the skull that they used to use. I don’t think it’s an album cover, I think it’s more of a single release they had. It was the skull getting cracked with a hand or I think it was some wooden clubs with spikes in a skull.

OD – I think your talking about “Damaged Inc”? 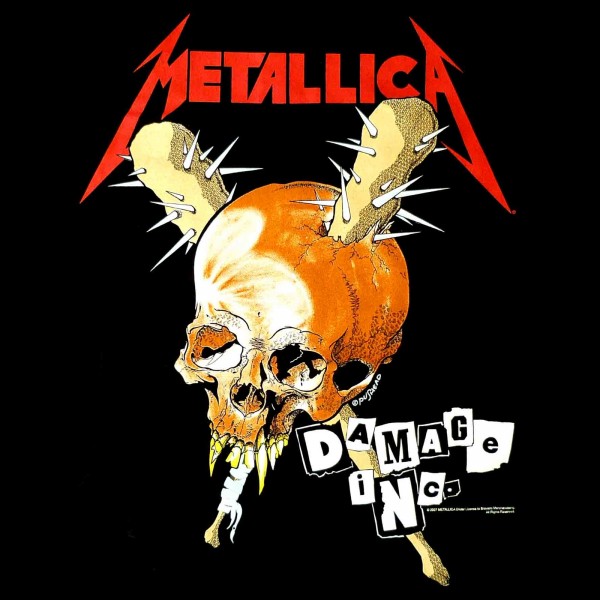 Maciek – Yea, that’s it. I thought that was so fucking scary. I was four or five years old and I just thought it was so cool.

OD – Are there any plans to release your 2007 demo “Westcoast Holocaust” on vinyl in the future?

Erlend – I think we are just gonna let that die (laughs)! The only thing we have done is put one track (Snilepisk) from the that demo as a B side on Bruane Brenn 7″. It sounds almost shittier on there as it does on the actual demo (laughs).

Maciek – It’s also pretty funny to hear it seeing as it’s re-recorded. To hear the old version is even more funny.

Erlend – That was also the first song we ever recorded.

OD –  You have been touring relentlessly since “Mier” was released early last year, have you any plans to take a break and begin recording some new material, or have you been already?

Erlend – We barely have got started! We have this tour coming up in America with Mastodon and Gojira and a bunch of festivals in the Summer.We then plan to take some time off this coming Fall and start to work on the third album. So hopefully is won’t be as long as a time gap between the fist album and the second (Meir).

OD – You are about to embark on a tour with Mastodon and Gojira next month, this will be a spectacular tour no doubt. Have you ever shared a tour with either of the bands or perhaps a festival in the past, or is this the first time?

Erlend – Yea, we played Soundwave in Australia almost 2 years ago and we have done side show’s together with both Mastodon and Gojira and it just worked really well. I think that’s why this tour was put together. The Mastodon guys really liked the package and wanted to do a whole tour and we are really glad that it finally happened. 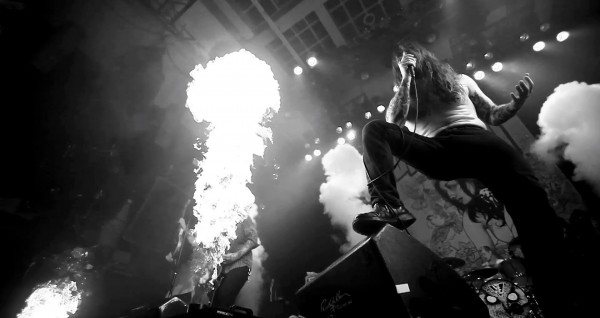 OD – KVELERTAK are a prime example of how healthy the heavy/punk/metal/rock scene is at the moment, do you have any particular bands that you are currently inspired by, or have taken a liking to?

Erlend – It’s kind of a difficult question as everybody in the band is listening to different things. There is not really just one band that we all listen to at the moment. I think we just get inspired by being on the road with bands and seeing them perform. Mastodon have been a real inspiration for us and even bands like Torche and Converge. I think its just inspiring to watch a great band perform every night. 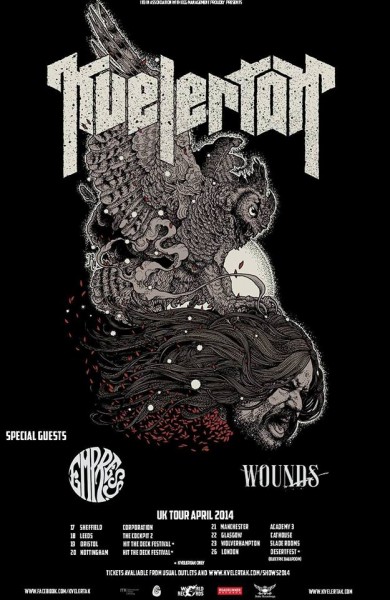 OD – Have you enjoyed this recent tour with WOUNDS and EMPRESS?

Erlend – They are all great guys. It’s been a really short tour but they are really nice bunch of guys. It’s been short and sweet but really fun to be on the road with them.

Maciek – Yea, it’s only been less than a week but I’m liking what I’m hearing. We are heading off to Desert Fest in London  on our own after these shows.

OD – When can we expect a new Kvelertak album?

Erlend – No guarantees but possibly next year. (He asks Maciek) Is that a long-shot?

Erlend – We will see how long it takes from when we start the writing process.

OD – What has been the most stand out memory for you over the last four years since the release of your debut?

Erlend – There has been some really crazy stuff over the years, like ending up on TOTO’s plane.

Maciek – Yea, that was cool! Flying on TOTO’s private plane!

OD – Did it have a be-jeweled interior?

Erlend – It was pretty ordinary, but you could turn the seats all the way around. They had swivel seats on the plane. That was cool. (Laughs). I have said this a bunch of times before in interviews, but really the craziest thing that has happened to us was the last headline tour that we did in America. We were in San Francisco and the Crown Prince and Princess of Norway were coming to the show. There was a very big press thing with Norwegian media and it was kind of weird because we were playing Slim’s which is a medium sized venue at best.

OD – Did they make it to the show?

Maciek – Yea, we had to meet them do all this press. Norwegian BBC was there and it was a really big deal. Kind of weird/surreal but very cool.

Erlend – At the same show, the chef who works at the place told me that James Hetfield (Metallica) had called and was looking for a guest list to the show and I thought he was just kidding but when we were on stage, I looked over and he was standing on the side of the stage and that was insane. Also, to top it off Rob Flynn (Machine Head) was taking pictures of the whole thing down in the photo pit and had asked for an official photo pass.

Kvelertak are currently on tour in America with Mastodon and Gojira. The bands latest album “Meir” is now available via Roadrunner Records. 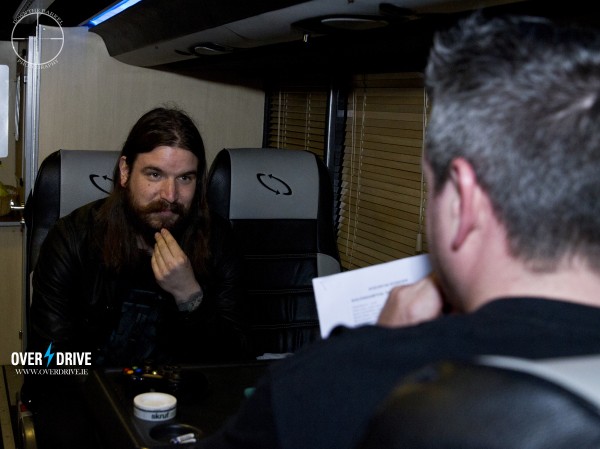