It’s been a long time coming, but as the saying goes, ‘good things comes to those who wait’, and in this case, it’s the anticipated opening night of of Behemoth, Arch Enemy, Carcass and Unto Others EU/UK tour in Dublin’s 3Olympia Theatre. 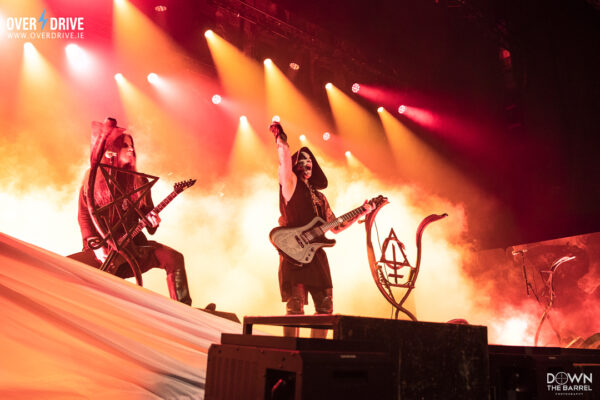 As far as line-up’s go, this one is air-tight! The sightings of 40ft branded trucks cruising down Dublin’s busy Dame St, is truly a sight to behold, twinned with punters snaking all the way around the exterior of the venue, which only adds to the electric anticipation that lays ahead…

There is something about certain live shows where you just know, upon arrival, that you’re in for a memorable nights entertainment and tonight was no exception.

Having only made their maiden voyage to Ireland back in March of this year, Portland’s Unto Others are tasked with opening up the first performance of this gigantic seven-week tour which, will see all bands trek through the EU and UK.

With little fanfare and polite applause, vocalist, Gabriel Franco wastes no time in tearing the band-aid off their biggest performance on Irish soil [to date], with a simple, “Hey Dublin! It’s good to be here” before they launch into ‘Heroin‘, from their latest opus, ‘Strength‘.

Bathed in low-lit shadows for most of the set, the four-piece surge through their immediate bangers with, ‘Give Me To The Night‘, ‘No Children Laughing Now, ‘Can You Hear The Rain‘, ‘Nightfall‘ and ‘When Will God’s Work Be Done‘, with the flawless presence of bassist, Brandon Hill, drummer, Colin Vranizan and lead guitarist, Sebastian Silva driving tonights crystal clear mix to every nook and cranny of the venue.

Bidding their farewell’s to a rapturous applause, it’s apparent that tonights sold out venue got a taste for, Unto Others and are clearly craving more.

Next up, is the one and only Carcass. Groove-laden Extreme Metal with lashings of swagger, and a setlist that, to be honest, will never be enough to encapsulate their rich legacy.

Sounding as good as they ever have, Jeff Walker leads the attack with a gold-plated classic, ‘Exhume to Consume‘, from their ’89 ‘Symphonies of Sickness‘ LP, and proceeds to pummel the 3Olympia with a splattering of gems including, ‘Buried Dreams‘, ‘Incarnated Solvent Abuse‘, ‘This Mortal Coil‘ and ‘Heartwork‘.

Their nine-track setlist is short, but very sweet, and was devoured by the punters, who tossed beers to the heavens and bounced into the pits that were pocketed throughout the main floor.

Walker’s mention of their legendary Irish debut in [now long gone] McGonagles venue back in ’88, gets a resounding welcome from all as they continue to slaughter the audience with track after track. From the sight of Bill Steer ripping his solos, [albeit dressed like a young Scott Gorham back in the Lizzy days], to Walker flicking out bass pics like ninja stars at any given opportunity, puts a wide smile on my face.

To be honest, Carcass can’t do any wrong. A return to Ireland for a run of headline shows would be greatly appreciated, but tonight we’ll take what they’re offering in spades. Excellent stuff indeed!

Next up is Arch Enemy. Having last played on Irish soil eight years ago, the return of their brand of  melodic metal was received with a warm welcome throughout the venue once they exploded on stage moments after their; “PURE FUCKING METAL” stage banner dropped and the first chords of ‘Deceiver Deceiver‘ comes crashing through the venue’s PA.

Now, some will disagree with me here, but despite Arch Enemy’s performance and sound being what you’d expect from a band of that stature, there is a strange connection with  their onstage presence. And by that, I’m implying that it felt forced, and dare I say, manufactured. Sure, all bands have rehearsed segments during their live shows, especially when there’s production involved, but something just didn’t sit well with me. They played flawlessly, but if you looked closely, there were moments when Michael Amott looked disengaged and uninterested.

Having seen them back when Angela Gossow [now the band manager] was filling the roll as vocalist, and a few times with her replacement, White-Gluz, to what I’m seeing tonight, it felt more like the regional managers of Hot Topic formed a band to showcase this seasons latest clobber.

Harsh, I know, but each to their own. Perhaps I’ve got it wrong, or let’s put it down to the opening night of the tour, but that spark and connection that is so very common with band members during a performance was absent tonight. Despite that, they worked their way through a thirteen song set list, going back as far as ‘Wages of Sin‘ LP with ‘Ravenous‘.

As expected a sizeable chunk of tonight performance is taken from their latest album ‘Deceivers‘ which is understandable, but a good selection of bangers such as, ‘My Apocalypse‘, ‘The Eagle Flies Alone‘, ‘As The Pages Turn‘, and set closers, ‘Snowbound‘ and ‘Nemesis‘ were received with thunderous applause, which at the end of the day, is all that really matters.

Over the last three album cycles, Behemoth have grown in strength that most extreme bands could only dream of. Just looking at their relationship with Ireland in particular, upon each return they graduate to bigger venues and tonight will be their biggest indoor Irish headline show to date, and to say that they are embracing it with open arms, is an understatement.

With an ominous and wonderfully evil-looking production that include two large tubes vomiting factory-levels of dry ice from either side of Inferno’s beast-sized drum kit, Nergal takes command of The 3Olympia with the his trademark stage dramatics from the get-go, pummelling the audience with the glorious, ‘Ora Pro Nobis Lucifer‘ as man-mountain, Orion and windmilling blur of Seth give no mercy.

Recent single ‘The Deathless Sun‘ makes an early appearance sending the venue into a swirling mess… and it’s a glorious sight indeed. It’s impossible to take ones eyes off Nergal as he stalks the edge of the stage with a frenzied look of focused power and mischief in his eyes. ‘Ov Fire and The Void‘ is followed by the first of two live debuts tonight, ‘Thy Becoming Eternal‘ and later, ‘Versvs Christvs‘, which are devoured by tonights sell out capacity, despite the albums release was just a few weeks ago.

Not only are Behemoth a sensational live band that are pushing Extreme music to a wider international audience, but their live shows are second to none. From their recent headline performance at Bloodstock to their indoor shows, there is no expense spared on production, and tonight we get it all…well apart from pyro, which is a shame, but with a captivating show like this, no one was complaining.

‘Bartzabel’, ‘Christians To The Lions‘ and ‘Off To War!‘ are unearthed in the middle of tonights setlist, which keeps the adrenaline at an all-time high, from both band and audience. And before we could catch our breath, the band drop ‘No Sympathy for Fools‘ for the first time live since 2006, and parts of the venue erupt into organised chaos.

With very little banter from the frontman, Behemoth simply concentrate on proving why  they are currently regarded as one of the most premium live acts within the heavy music sphere, and tonights performance just doubles down on that.

As the performance draws to a close with the opening track to 2009’s ‘Evangelion‘, opus, ‘Daimonos‘ is presented before the almost Kind Diamond delivered ‘Versvs Christvs‘ which sees Nergal creeping across the dry ice swamp in a dark hooded cape, slowing swinging a scented thurible, which quickly fills the air with its sweet, musky aroma.

The final weapon in Behemoth’s arsenal is ‘Chant for Ezkaton 2000‘ from 2007’s ‘The Apostasy‘ which perfectly closes another triumphant Irish victory for the band. As they stalk the lip of the stage to offer their thanks to their adoring fans, there is no question that Behemoth are only beginning the next chapter of their plans for world domination.

Whatever comes after this album’s two-year campaign, is anyones guess, but if there’s one thing I know for sure, it’s going to be bigger than anything they’ve ever done before.

Behemoth / Arch Enemy / Carcass / Unto Others are currently on tour and will be making their way through the UK and EU. Check the dates below for your local venue.