Madball’s new album ‘Hardcore Lives’ was released earlier this year in June and is a neck breaking lesson in bloody knuckle Hardcore, however seeing them in a live setting is an experience that your inclined not to forget any time soon. 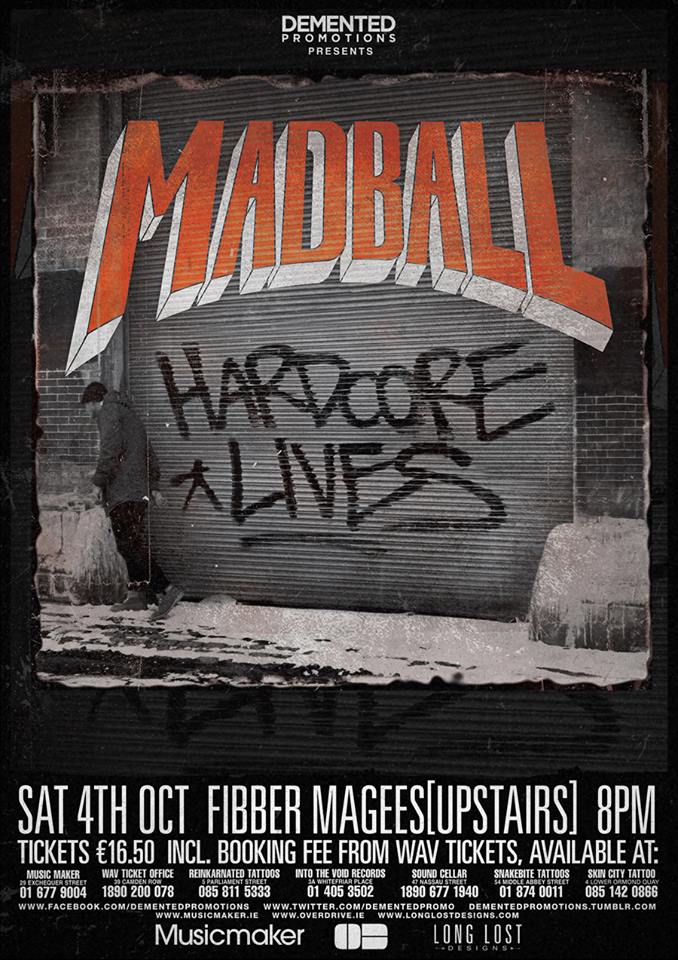 Before even starting I had high expectations for this band. After walking around the venue I finally found an area where the whole stage was on show but would not involve heads tossing in all direction around me. Striking up a conversation with an English middle aged man in front of me, was I told that I would not leave this gig without a smile on my face – this band has not let him down yet. Although Madball has not played many times in Ireland the above gentleman has, in the past, seen this band three times in different countries; one being the Groezrock Festival in Belgium. Each time trumped the last and this was to be no exception.

The band come onstage full of energy and talks to the crowd throughout. They play tracks from their new album which the crowd sing along to, reinforcing the success of the album and also some old anthems that everyone knows and sings to. ‘Get Out” is their second song and this gets the crowd going. By their fifth song DNA so much moshing and head banging has happened that it is hard to breathe from the heat. Guys are taking their tops off and continuing to revel in the presence of this great band.

A wonderful thing is happening. Up front are the younger staunch fans that head bang, sing along, crowd surf and mosh to their hearts content. They are enveloped by the band’s energy and do not walk away from the band from start to finish. These young fans take up the first five or six rows of the venue and with no security they are in fan heaven. They step on stage with the band to sing along to their beloved songs or throw themselves into the crowd. The venue is not equipped for this which is obvious when guys are getting tangled in the overhead cables from the low lying ceiling. This does not deter the fans and it provides amusement for the onlookers and band alike.

Behind them are young to middle aged fans that enjoy the band but occasionally go to the bar for a drink or go for a smoke. They partake in head banging and moshing, singing along to the songs that they know and talking when they don’t. This group takes up a further six or seven rows and cheers after every song. 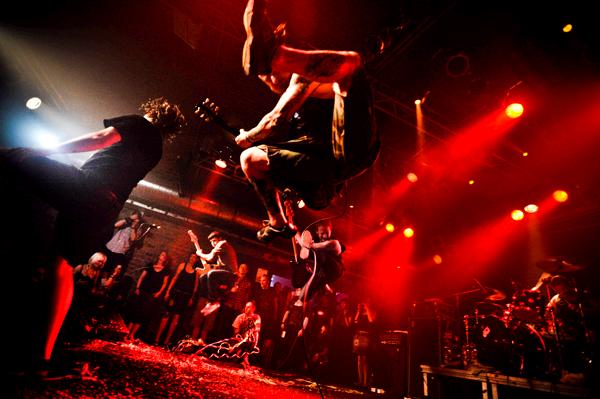 But directly behind them is where I am standing and it is among the diehard, dedicated fans that are older and less inclined to get caught up in the tangle of a sweaty pit. They want to stand back and see this band in all their glory. Couples and singles alike, sing and relish this experience together. Chances are they have all seen this band before, moshed and surfed before and now they are here to experience this band in a completely different light.

Never before have I seen a set up like this where three groups of people can attend the same gig and organise themselves in this way and I have a perfect view as it happens.

The band really interacts with the audience and the bassist stops the show to wish their sound guy a happy birthday where the whole crowd turns to face the sound desk to do the same. The guy does not know where to look but the gesture shows the personal side to the band whereby the guys that tour with Madball are like family.