Maiden England 1988 to be released on DVD, CD and Limited Vinyl.


Get ready for another fantastic release from the mighty Iron Maiden. EMI are proud to announce the highly anticipated release of the Double Disc DVD MAIDEN ENGLAND ‘88 on 22nd March for Ireland only and 25th March for all other territories. Now available for the very first time on DVD, this live show was filmed across two sold-out nights at Birmingham N.E.C Arena, UK in November 1988 during the band’s “Seventh Son Of A Seventh Son World Tour”. Disc one contains the concert which has been specially upgraded and extended from the existing 1989 long-form VHS release and now includes three previously unreleased encores: Running Free, Run To The Hills and Sanctuary thereby completing the full concert with a total running time of 110 minutes . 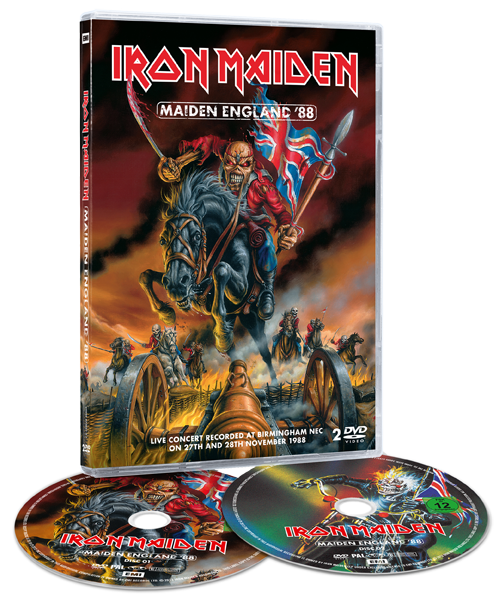 Maiden’s own Film Producer and Director Andy Matthews went back to the 1988 edit and painstakingly remastered each shot digitally; colour correcting and grading to give the image the best possible look from that time.  As well as the VHS stereo sound track by Martin Birch, the band’s producer between 1981 and 1993, the DVD also includes a brand new 5.1 audio surround mix by Maiden’s current producer Kevin Shirley. The concert was meticulously directed and edited by bass player and founder member Steve Harris, so as to capture the performance from a fans-eye view of the stage, focusing fully on the music, the elaborate stage production and the lighting.  Add into the mix an electrifying set list and of course Eddie, and Maiden England now offers a snapshot of a bygone era in which the band, as they continue to do today, devote their all in delivering the ultimate live experience for their fans.

Disc two is an extensive bonus disc featuring an exclusive documentary charting Part 3 in the History of Iron Maiden. This 40-minute film comprises recent interviews with the five band members and manager, Rod Smallwood. Picking up the story in the aftermath of the ‘84/85 World Slavery tour, this interesting and insightful documentary sees the band speak candidly about their memories of an exciting and occasionally turbulent period from which would emerge the albums Somewhere In Time and Seventh Son Of A Seventh Son. As the Eighties began to draw to a close, so did another chapter in Maiden’s compelling history.

Other special extras on the bonus disc include Twelve Wasted Years. First released as a longform VHS in 1987 and available for the first time on DVD, this documentary runs for 90 minutes and includes archive interviews and dynamic live footage from the band’s beginnings in the now legendary Ruskin Arms pub, via London’s Marquee club and three World Tours. Five promo videos for the singles from the aforementioned albums are also featured and have been carefully restored and improved upon from the original films using the very latest software with the audio remastered in digital stereo. 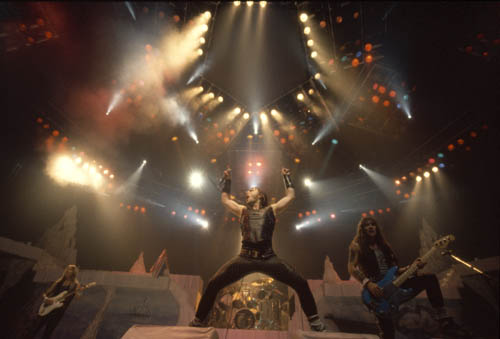 Manager Rod Smallwood comments “We’ve been busy upgrading this concert footage for a long time, with our in-house Film Producer and Director Andy Matthews working tirelessly to weave his magic yet again!. The 1989 VHS video has been largely unavailable for many years and we know how eagerly our fans have been awaiting the new version so we wanted to give it the best possible treatment. The current Maiden England World Tour which continues later this year revisits much of the set list and production from the initial 1989 VHS release so it will be interesting to compare just how much has changed in terms of our 2013 live show production, especially with all the advances in modern technology and the improvements we’ve been able to make to the set”.

The Maiden England ‘88 concert soundtrack will also be made available on 2CD album, Limited Edition double vinyl picture disc and Digital Download formats. The audio had previously only ever been available before on CD as part of EMI’s 1994 Sound And Vision Series packaged alongside the VHS, but with two tracks fewer than the video contained. Can I Play With Madness and Hallowed Be Thy Name were not featured as there was no space on the 1CD disc. Now with the three encores also included the double disc offers a total of 5 tracks previously unavailable on CD making this the first full and complete audio recording release of this historic tour.

DISC ONE – MAIDEN ENGLAND ’88
Set List:
Moonchild
The Evil That Men Do
The Prisoner
Still Life
Die With Your Boots On
Infinite Dreams
Killers
Can I Play With Madness
Heaven Can Wait
Wasted Years
The Clairvoyant
Seventh Son Of A Seventh Son
The Number Of The Beast
Hallowed Be Thy Name
Iron Maiden
Run To The Hills*
Running Free*
Sanctuary*