This show is taking the live entertainment experience to a whole new level, with an epic show unlike anything seen before. Bringing together the largest assembly of Marvel characters in a live production, audiences will be able to watch some of their favourite Marvel Super Heroes step out of the silver screen and onto the stage – bringing the action to life right before their eyes.

Everyone will be able to cheer for their favourite Marvel Super Heroes, including Spider-Man, Iron Man, Hulk, Thor, Black Widow and more, as they battle Loki and Marvel’s most sinister villains in a live, action-packed arena performance for the whole family. It’s being hailed as the most technically advanced live show ever, with cutting-edge special effects, pyrotechnics, aerial stunts, martial arts, motorcycles and more.

From the creative team that brings you such arena spectaculars as Disney On Ice, Feld Entertainment Inc, the world’s leading producer of touring live entertainment is excited to announce the UK tour of Marvel Universe LIVE! This arena stunt spectacular will be swinging into seven major UK cities – Nottingham, London, Birmingham, Glasgow, Sheffield, Manchester and Belfast – for an electrifying run of over 40 shows that have already entertained almost 2 million families in over 65 US cities to date in its first tour. 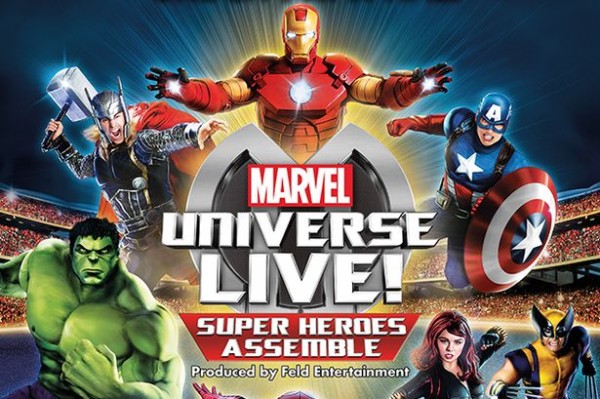 Tickets for Marvel Universe LIVE! – On sale from THURSDAY 14 APRIL