MASTODON RETURN WITH A KNOCKOUT AURAL PUNCH IN THE CRANIUM!


Without a doubt one of the most anticipated new releases of the year within the metal universe. Will the mighty Mastodon blow their load in an over indulgent, over produced, commercial hot mess, or continue to pave the way forward in captivating contemporary progressive metal?

There are not many bands who have managed to maintain such a rich legacy of groundbreaking, top ranking albums and with their latest offering due to drop in the coming weeks. Overdrive gets up-close and personal with ‘Emperor of Sand‘.

Opening with ‘Sultan’s Curse‘, the Atlanta four-piece launch straight into an explosion of riffs that is immediately reminiscent of Leviathan/Crack The Skye era. A wave of (God forbid) commercial stems weaves though the composition signalling the current mindset of Mastodon, which at present, seems to be an equilibrium based on the band’s well-established ability for creating mind-boggling crushing arrangements, hazed with present-day soaring choruses that have been becoming more apparent with each release.

‘Show Yourself ‘ (one of the most ‘radio friendly’ offerings) will no doubt be a feather-ruffler for the purists who were repulsed by the likes of ‘Curl of the Burl‘ and ‘Motherload‘. This is Mastodon flexing their mainstream muscles and doing it remarkably well. Impossibly catchy and created for the live stage, these further steps towards the more populated end of the metal spectrum are a welcome addition – as long as they keep their boots firmly rooted in their fearless ability to step outside the box.

If you’re expecting a straight forward verse/chorus/solo equation on ‘Emperor of Sand‘, then think again – as their trademark approach to creating endless space and extended horizons continues in the form of ‘Precious Stones‘, which is an instant upbeat classic rinsed with a variety of styles – some of which touches on Maiden here and there. Brann Dailor’s spectacular drumming shines through the mix as clear as sunlight, with the unexpected added tambourine to highlight the concrete groove, they so gleefully promote on this LP.

With a definite presence of amplified groove taking precedence over the traditional cosmic compositions of the past, Mastodon are rolling out a plethora of catchy middle-eights and choruses for Emperor of Sand, giving gusts of fresh air as displayed on Steambreather, rather than spiral down a black hole of complicated arrangements and tangled prog overkill like many other bands.

Producer Brendan O’Brien has outdone himself on this outing, allowing the mid-ranges flow seamlessly into aural battle scenes with the grace of a floating feather. The sheer brutality of ‘Roots Remain‘ is a testament to O’Brien’s knob-twiddling skills, as frantic riffs burrow their way through the undergrowth while perfectly modulated twinned vocals from both Hinds and Dailor glide over the surface. The threat of grinding riffage, coupled with another sensational heart-soaring chorus, returns to remind us of the protocol for this album and it doesn’t stop there. Word To The Wise follows with this persistent blueprint, offering the balance of old and new, all the while a hive of dark prog style riffs are buried beneath a galloping bpm.

A standout moment comes with ‘Ancient Kingdom‘ showing a truly inspiring mix of styles that emanate fumes of an almost hard-rock stadium feel, due to the key changes within the chorus, that are simple but equally epic. Pushing on with Clandestiny, the pace of the album’s consistency keeps pumping steam, holding attention since the opening track (a good sign indeed). A tip of the hat to Devin Townsend can be heard within the chorus before an unpredictable left turn into 70’s prog land leads the listener on a fantastic journey down a path with a Thin Lizzy syle solo thrown in for good measure.

Andromeda signals one of the albums heaviest intros showing Mastodon embellishing their darker side, all the while continuing to display their unique ability to create an aural journey, rather than your standard start-middle-end format, that is so commonly used these days.

Penultimate track ‘Scorpion Breath‘ offers an abundance of atmospheric layers laced with fierce guitar work from Hinds and Kelliher setting the scene for the slowest track on the album ‘Jaguar God‘. Without a doubt, one of the most unusual tracks, not only on Emperor of Sand but in the bands legacy, shows a different side to the regular eco system normally found on planet Mastodon. Possibly a sign of things to come with future releases.

Overall, Emperor of Sand see’s the band excel in the progress department and deliver a quality successor to 2014’s ‘Once More ‘Round The Sun‘. No doubt this album will reach the lofty heights of 2017’s ‘best of’ lists, however, will cause many a heated debate as to the future of the band’s allegiance to their heavier roots. 3.8/5

Emperor of Sand is set for worldwide release on March 31st via Reprise Records. Click here for your pre-order. 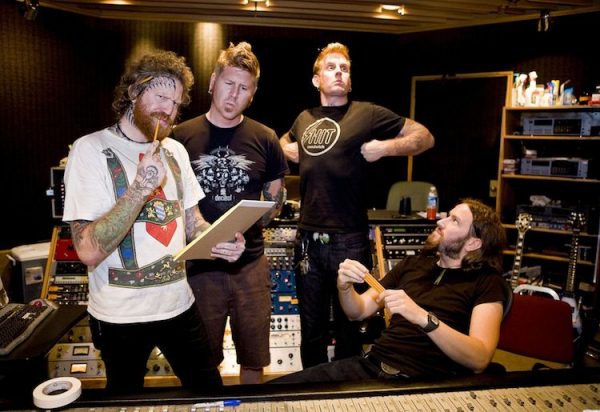