The secret has been lifted! Old school death metallers, MEMORIAM, are set to unleash their debut album, ‘For The Fallen’, on March 24th, 2017 through Nuclear Blast Records. Get all the information below. 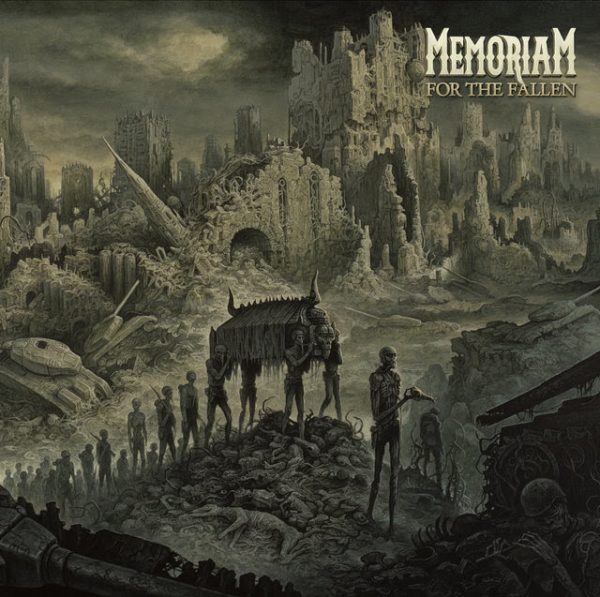 Overdrive can confirm that the album will contain 8 tracks, incl. ‘War Rages On‘, ‘Resistance‘ (both featured on The Hellfire Demos I) and ‘Surrounded (By Death)‘ (featured on The Hellfire Demos II). To give a first taster of what to expect from this highly-anticipated record, the first single from For The Fallen, ‘Reduced To Zero‘, has been launched today. Check it out on the video below:

The album’s impressive artwork was created by Dan Seagrave (Benediction, Dismember, Hypocrisy, Suffocation and much more).

Dan Seagrave stated on the cover artwork:
“Starting from the band’s thoughts on visualising a kind of funeral procession with a theme of combat, war and in conjunction with the title ‘For the Fallen’. As with all my works, I then attempt to make the information evolve in my minds’ eye, and allow imagination to take over those elements. But retaining the core concept.

The painting thus depicts. A funeral procession moving through a long war-torn cityscape. Twisted shards of towers & buildings. A cathedral facade stands defiantly, yet riddled with destruction and decay. At closer inspection, the structures all seem to be infected with an element of natural decomposition, as if organically inclined to fade with the demise of the season.
The season itself lost in a timeless void. The figures appear as remnants of once soldiers, now strange in their gathered mass. Drawn forwards by the drifting momentum of the procession. Unaware of their emaciated state they follow the commander.
The Commander’s elongated appearance is tattered and almost creature-like, with the combat style elements and gas mask falsely presenting as a costume.

The procession appears almost ghost-like, ancient and serene, slowly moving through this eerie place as if forever. Far in the background, there might still be a war happening, but perhaps in another time. As we view a sub level of reality. Lost in the present. Captured in light, where the war had passed through and we are left in a ghost biology. Where chemicals and history meet to create an inescapable surrealism.”

Vocalist Karl Willetts stated on the track:
“‘Reduced To Zero’ is a comment on the times that we live in. In a world that is dominated by fear, hatred and intolerance, the song is a direct result of Brexit and Trump and the general rise of right wing nationalistic xenophobia.”

Pre-order For The Fallen now digitally and receive ‘Reduced To Zero‘ instantly here.

For The Fallen – Tracklisting:

The Hellfire Demos II – Tracklisting:
Side A
01. Drone Strike (only available on this release!)
Side B
02. Surrounded (By Death)

MEMORIAM was primarily developed to fill the void that was left following the tragic death of Martin “Kiddie” Kearns, the drummer from BOLT THROWER, back in September 2015. BOLT THROWER subsequently placed all activity on hold for the foreseeable future which gave Karl Willetts an opportunity to develop a new project with friends that had expressed interest in forming a band for some time.

MEMORIAM are an old-school death metal band, maintaining the high standards set by their previous bands, focusing on the themes of death, loss and war. Initially, the band members got together to play covers of songs that had influenced them throughout their careers within the death metal scene, however, it soon became apparent that the new songs that they created were of a superior standard. 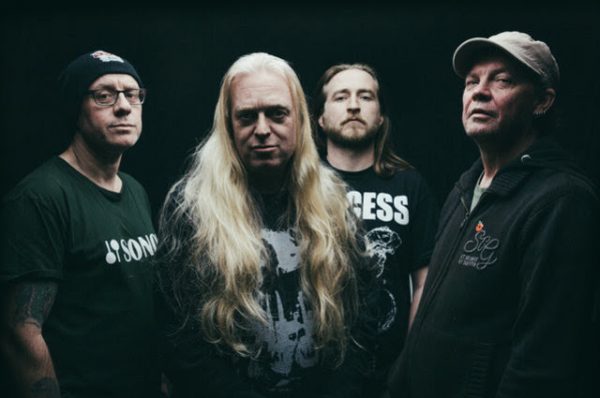