It’s that time again ladies and gentlemen! The time after Christmas has ruined our healthy lifestyles and we return to work dazed and confused and not knowing where we left our computer passwords and our will to commute to the office for hours at a time. Thankfully, Overdrive has just the solution – a healthy dose of heavy metal, as the annual Metal 2 the Masses gears up for its 5th successful year in Fibber Magees in Dublin. 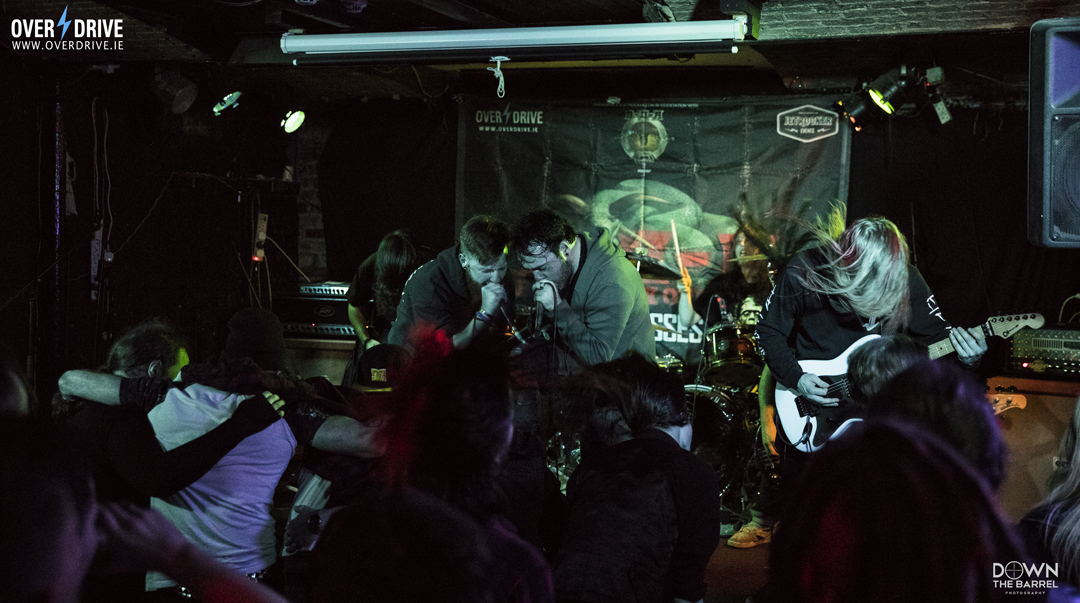 Year on year, the showcase makes it tougher and tougher to select the bands to make the stage here in order to make the hallowed grounds of Catton Hall, to play alongside the greats of metal like Twisted Sister, Slayer, Mastodon, Megadeth and many others.

This year, Bloodstock boasts (among others), the mighty Judas Priest, Gojira and Nightwish as headliners and one of our homegrown bands will join them in August. Shaun Martin reports on the first call to war. 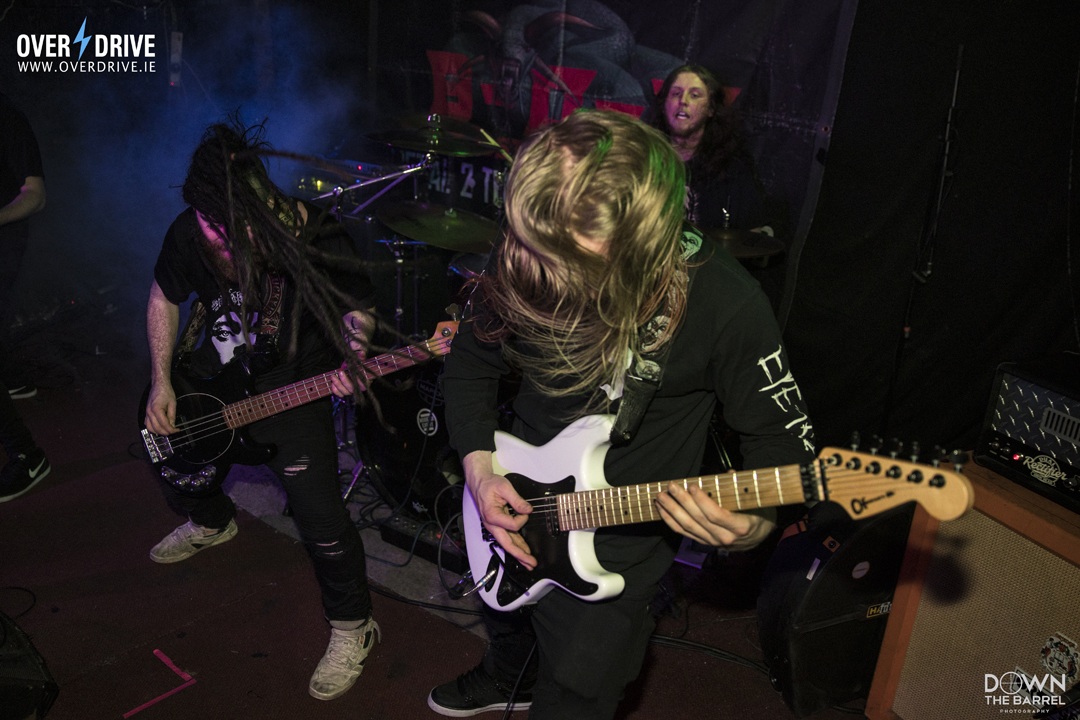 Out of the 5 bands to make the first declaration, the underground metal behemoths This Place Hell (formerly The Devil Wants Her Swagger Back) are the first to put boot to ass for 2018’s round. Having played the finals in 2017, This Place Hell have only changed their name – not their sound, not their savagery, and certainly not their reputation. Heavily influenced by the likes of Lamb of God, Slipknot, Machine Head etc, the band have lost zero fire since the last outing here (and they were also the last band to play at the final last year). With their opening title “Filth“, its a dirty game from the get-go as TPH go straight for the throat.

The bar is set with this performance, and all other bands in this round will either have to match or beat it. It’s furious. Their sub-heavy sound is already widely known and has garnered them a large following in Dublin’s metal underground. Frontman Stephen Cannon has the pipes enough to wake the dead, and guitarists Mick Hynes and Damian Regan riff the shit out of their 30-minute setlist. 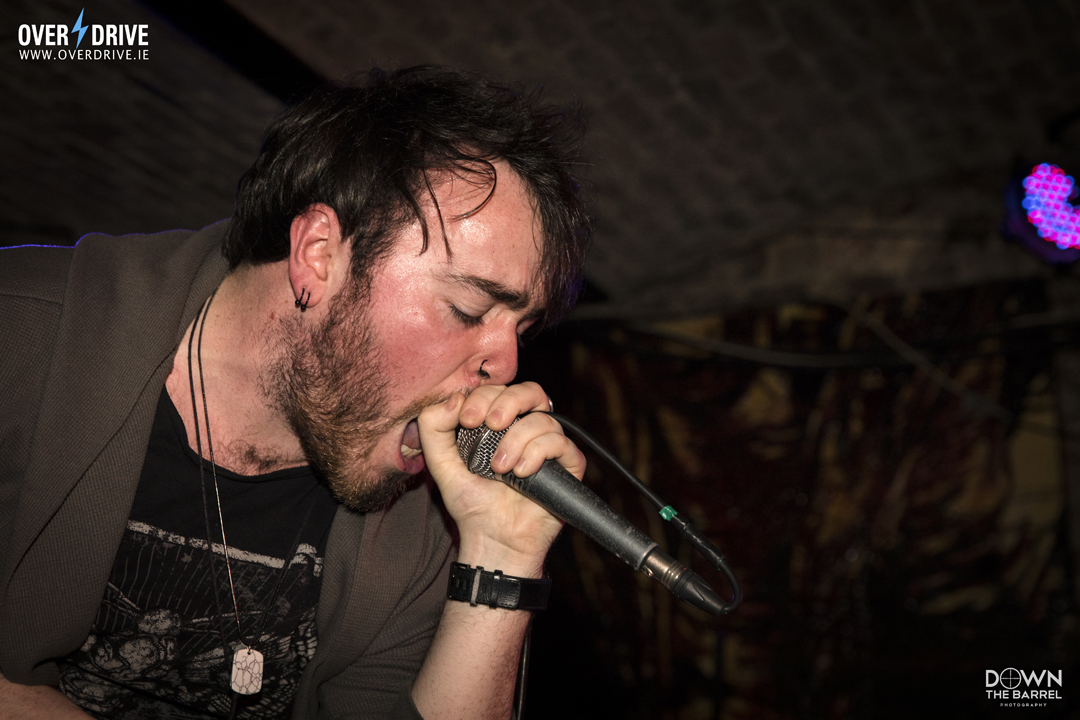 The band lay down the law when it comes to showmanship, enthusiasm and talent, shown effortlessly in their 2nd tune “Endgame“.  Their new material is every bit as hammering as their old stuff, and this is apparent in their newest release “Pummel“. They do exactly that! Drummer Ryan Cummins is lucky he doesn’t fall through the floor judging by the beats he is setting out, and bassist Dylan Scully is his old maniacal self on stage. The singer from Rouen, Andy Fitzpatrick, joins them onstage for their closer “Unnatural Selection“, and this goes down a big hit with the audience. A breakneck opener by This Place Hell, and its one that won’t be forgotten for a while.

Hot on the heels of This Place Hell is Rouen, also from Dublin. This is their third gig since forming, and I gotta be honest – they took me completely by surprise. I hadn’t heard of them before this, but that won’t happen again because these lads are awesome!

Brutally down-tuned guitars and a mix of Killswitch Engage infused with fury, good timing, and a driven will to succeed will take these guys very far indeed. Beautifully harmonized melodic intervals in their opening number “Void” set them apart from a lot of other new bands in this competition, whereas many will go hell for leather at top speed, but Rouen let talent do the talking. 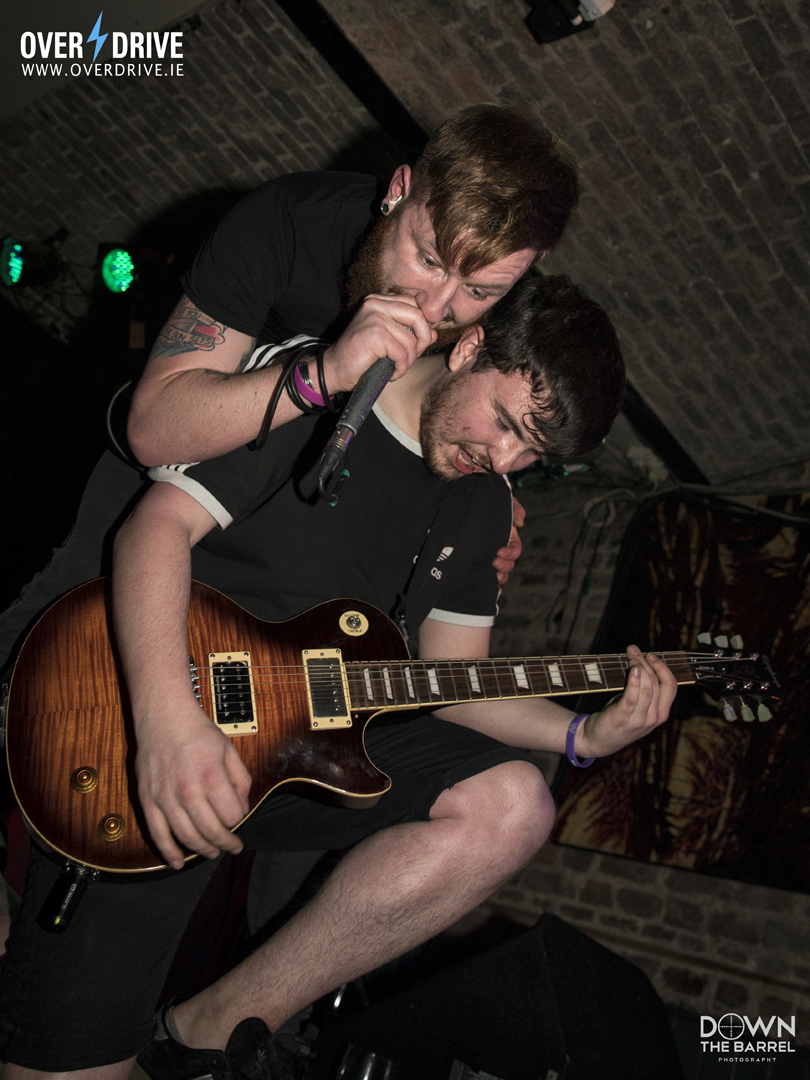 It’s a 5-piece jigsaw that paints a perfect picture of a band that has a bright future. Vocalist Andy Fitzpatrick leads the charge and has a voice that will rival any of the heavy-hitters that we will see on this stage and this is clear from the first song. Guitarist Dan Cohen has a hard time keeping his feet on the ground, leaping off his amp more than a few times (he’s lucky he didn’t rattle his head off the ceiling!) during “Borrowed“, and the audience is following suit. His brother-in-arms DJ Campbell is also sweating buckets in the corner, supplying support vocals and a wicked riffset to boot.

Drummer Morgan Beausang is looking pretty busy with his bass player counterpart Alex Sherry, both providing the spine of the material played here tonight. This Place Hell frontman Stephen Cannon joins Fitzpatrick on “Wander” (a slower type of nu-metal tune which catches me off-guard), and their final song “Young Right” kicks the jam back into high gear to finish out for the night.

Hard-rock/reggae/jazz-funk troupe Open Kimono meet us halfway through the night with their original and somewhat oddball setlist. Vocalist Rob Lambe was unfortunately under the knife only last Tuesday (January 16th), for throat surgery so his voice struggles a bit from time to time but he saunters through nonetheless. 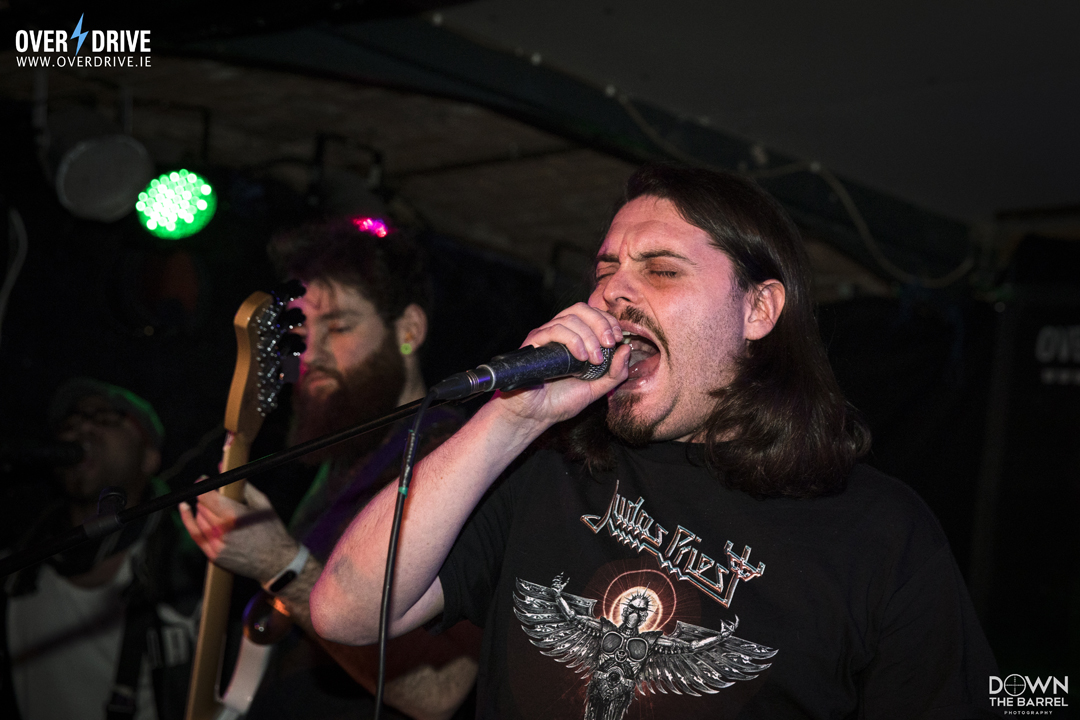 Open Kimono’s approach to M2TM is definitely novel, because at the drop of a hat just when a groove gets going, the beat changes into a fluid, jazzy-style of reggae that breaks the tempo a bit. That said, face-melting solos are also the order of the day courtesy of guitarist Shane Buckley. Their song ‘Cheese Pepsi’ is a bit of a mixed bag, feeling a bit like The Police with spatters of Pink Floyd. Tom Slattery on drums is holding the entire thing together in an off-count and impeccably-timed beat line and Paolo on bass shapes it all together perfectly. His slap-bass funky jams are easily distinguishable as pure talent and the perfect instrument that he enjoys playing (when you’re good at something, other people can tell, but that’s nothing new in this competition). Overall, an interesting performance. 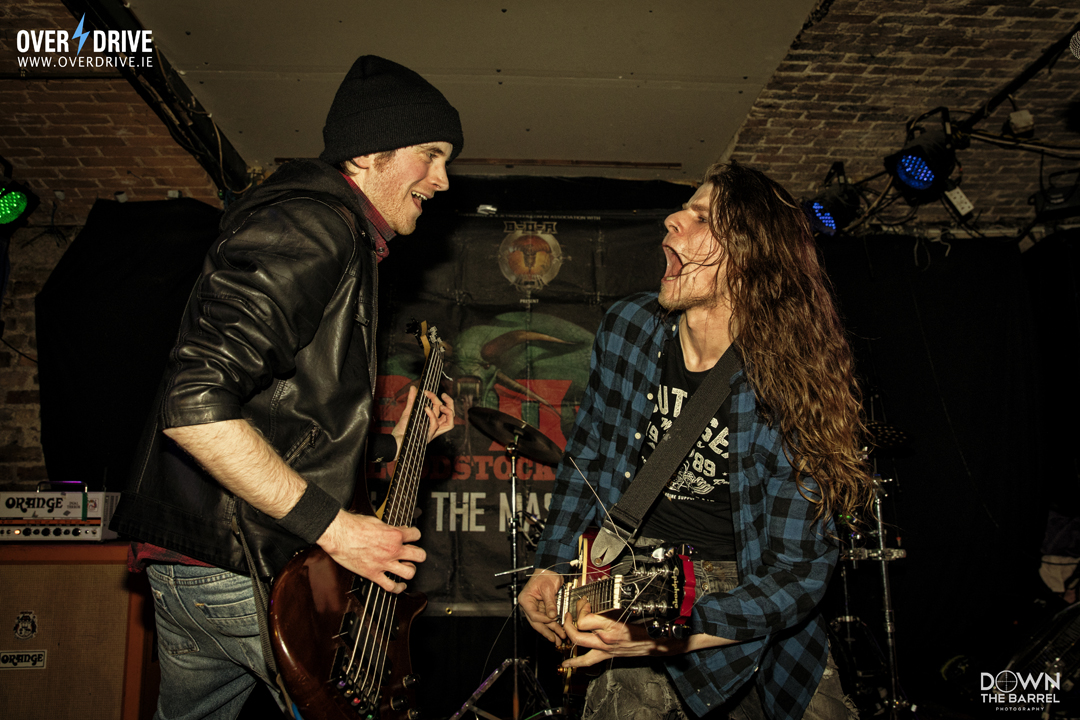 Next, is another former M2TM warhorse, Vendetta Love, having another shot at the title. Hard rock with grunge roots and a healthy respect for old-rock and roll, VL kick up the gain and get down and dirty with tunes like ‘On and On’, ‘ Salem’s Children‘ and ‘Ode to a Gypsy‘. VL are a throwback to when it was cool to not give a fuck about where the music will take you but still giving a lot of love for the craft. Frontman Shawn Mullen rips into the fretboard on guitar duties and giving that Layne Staley/Kurt Cobain vibe in buckets in his role on the stage, backed up by Colin Dunne on bass and Darren Flynn on drums.

Changing down to dropped-D tuning mid-set is always risky, as you run the risk of being out of tune but the lads pull it out of the bag and are able to re-tune their guitars on more than one occasion, proving that they are no strangers to improvisation to make the song sound right. ‘What’s in the Blood‘ is their jewel in the crown, starting out slow and melodic (it has a hint of 80’s cheese), but bursting into a groove-laden track with infernal guitaring and a  rock-solid backline from Dunne and Flynn. 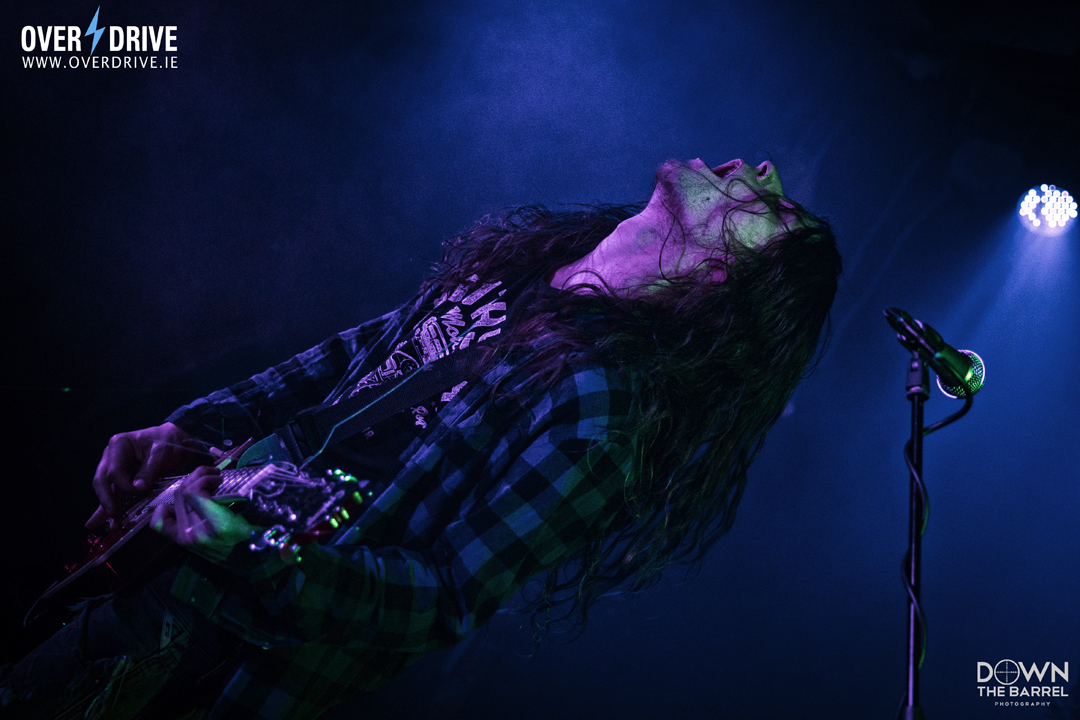 The floor is getting more and more packed as each moment passes and rightly so. VL are serious about making music and you can tell by listening to them that they believe in themselves to make it happen for them.

Finally, we have thrash maniacs Crossfire. They are another band who got quite far in previous competitions but sadly didn’t make the final 6. With only Crossfire left to play tonight, it’s either go hard or go home… and they didn’t go home!

Vocalist and guitarist Kevin O’Connor shares the lead duties with Matt O’Brien in a shred-a-thon worthy of remembrance. O’Connor’s raspy, almost death-metal voice is glued to the mic for the entire performance, with little talk from the band – that suits me fine: more time for headbanging. 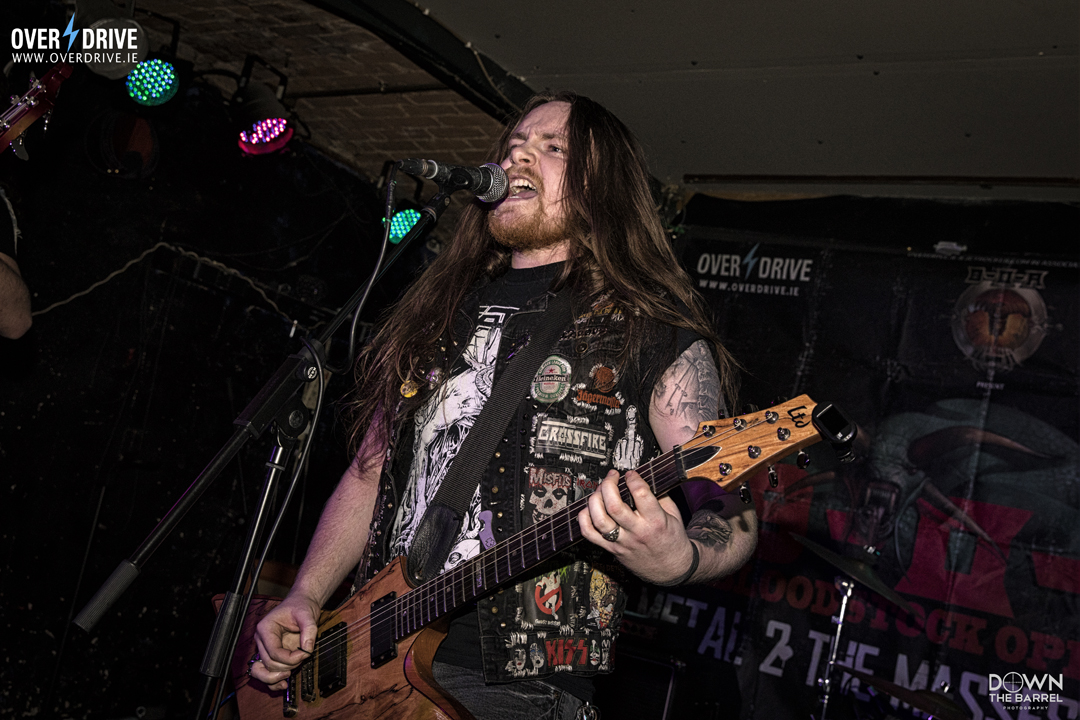 Drumming powerhouse Dan O’Connor is working his ass off behind the kit, double-bassing furiously and making the cymbals rattle like glass in an earthquake. Bassist Conor Jordan has a wide-eyed grin on him that teeters on the maniacal, but to be fair, if your heroes were Slayer, Metallica, Iron Maiden and Anthrax (to name a few), you’d have to get a bit giddy onstage playing your original material whilst the audience beat the snot out of themselves for pure pleasure. Heavy acknowledgements to early Big 4 groundbreakers (Ride the Lightning, Seasons in the Abyss, Symphony of Destruction etc), engulf their sound, but it’s not a homage – they’re just doing what they love but in their own way.

I love my thrash, and Crossfire are serving up dish after dish of face-melting riffs and beer-soaked ditties (‘Bonded by Beer‘, ‘Blood, Sweat and Beer‘, ‘Book of the Dead‘ to name a few), that make them prime candidates for Bloodstock Open Air, like their fellow thrashers Psykosis who have had more than one Bloodstock appearance. Crossfire are here to make a mess and have fun doing it, so get out of their way lest you find yourself with a target on your back. 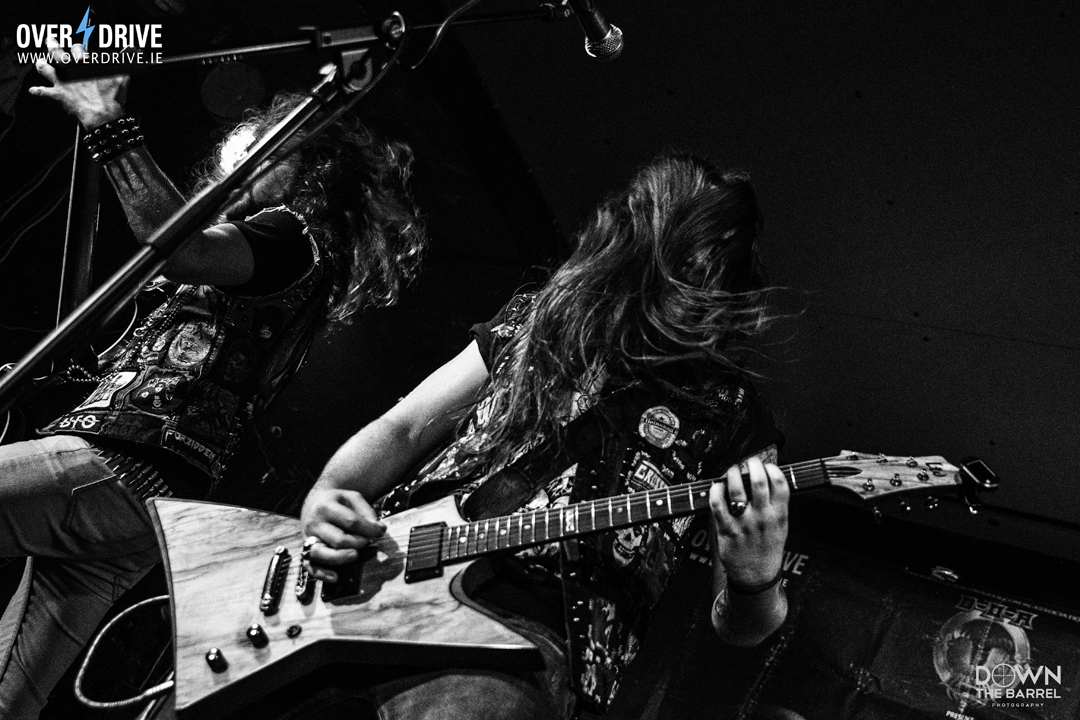 This was a particularly tough decision for the judges, as the quality of bands has steadily risen since Overdrive took over M2TM all those years ago. The crowd went with Crossfire with a runaway vote, but choosing a band based on tonight’s performances was sheer torture. Eventually, the judges stopped their shouting and went with This Place Hell to take a place in the semifinals. The next heat is on January 22nd in Fibber Magees, so get down early for a chance to see a band before they make it big. Words That Burn, Aponym, Infectious, and Jet Fuel Chemistry and Stone Sea are lining up the ducks in the gallery to take a shoDon’tont miss it!

Click the graphic below for the official event page for Bloodstock M2TM Heat 2 on Saturday, January 27th. 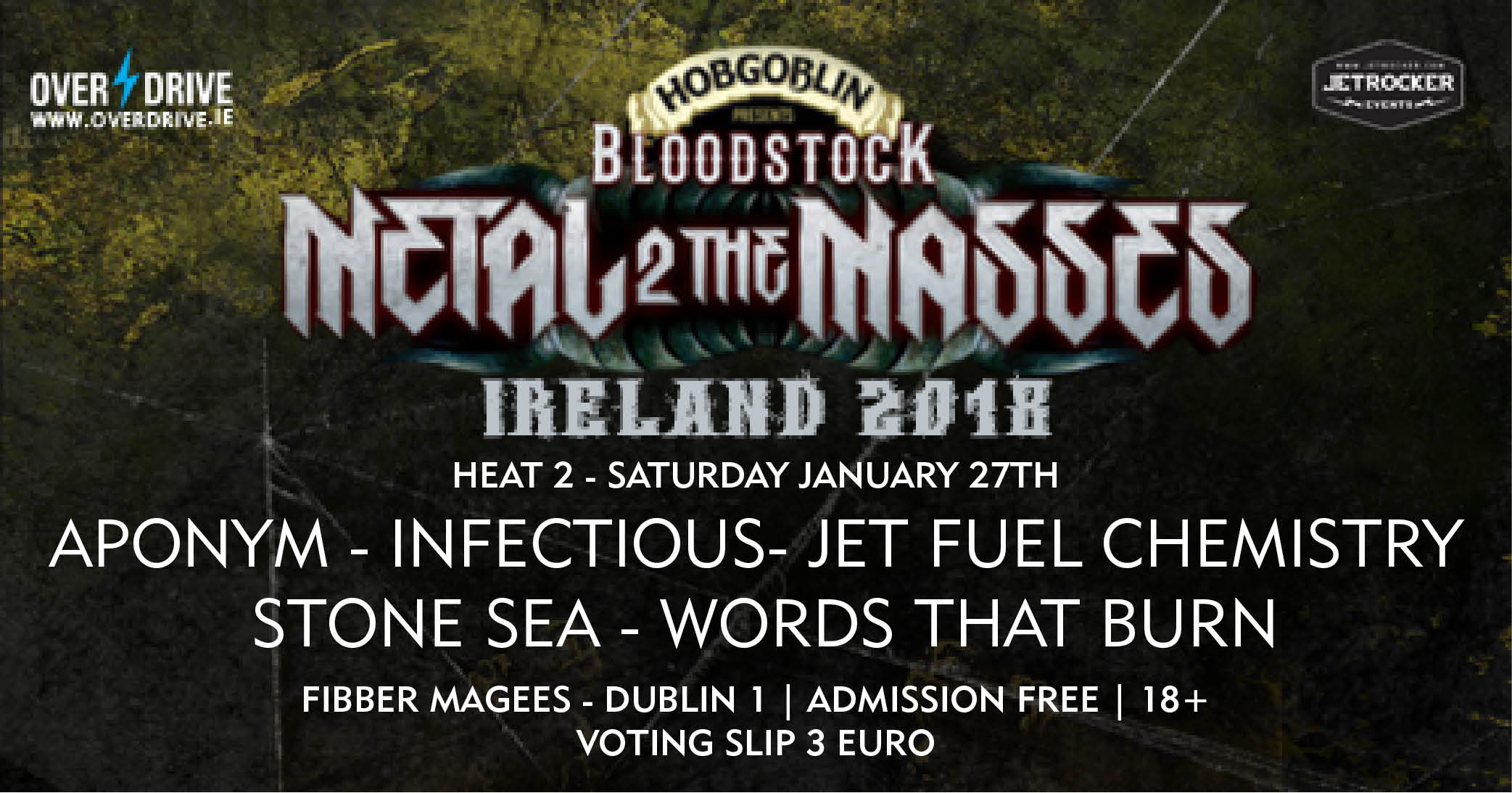 Tickets for Bloodstock 2018 are on sale now. Please visit this link for more details.