Metal All-Stars scheduled for The Academy. Have you got your ticket yet?


Could this be the gig of the year? So many high profile artists under one roof, that when Overdrive first heard of this event we didn’t believe it! Well, we have been assured that it is very real and will be taking place on December 17th in Dublin’s Academy! LOR Productions gave us an insight into what to expect from this incredible line up.

After a successful Eastern European tour last spring, the Metal All Stars are returning to conquer the rest of Europe with an Exclusive Irish Date in Dublin’s Academy on December 17th. This legendary show will have a breathtaking line up of some of the most iconic Metal musicians that should no doubt wet the appetite of any Rock / Metal fan. Check out the who’s who of confirmed artists that will be appearing at this years event!

Kobra Paige (KOBRA AND THE LOTUS)

The show will feature an evening of metal classics being performed in different kick ass line-up configuration with sets that include renditions of all the performing artists’ respective classics.

The promoter, Lloyd Barber from LOR Productions, said ”I’ve been a massive hard rock and metal fan for years. To be bringing this line up to Ireland is a dream come true. I am a huge fan of these individual artists. Currently, they are performing at major stadiums across Europe and UK. To deliver a show in a relativity small venue will be something every metal fan will enjoy. However, the venue size dictates the ticket prize. Hence, to make this exceptional value, we will also include free entry to The Cauldron 2015, which will be an afternoon and evening of rock and metal – a fantastic double-bill for all metal fans.”

LOR Productions hosts a variety of concerts and festivals in Ireland and UK. Including the extremely successful “BASH for Philo “ in August this year and will be launching a new club for Irish artists in Sydney Australia on St Patricks Day 2015.

Support for this show comes from Maverick and Crash.

Tickets for Metal All-Stars are on sale now for €70.45 (inc booking fee) and can be purchased from Ticketmaster.

For more information on this event check out LOR Productions or click on the graphic below; 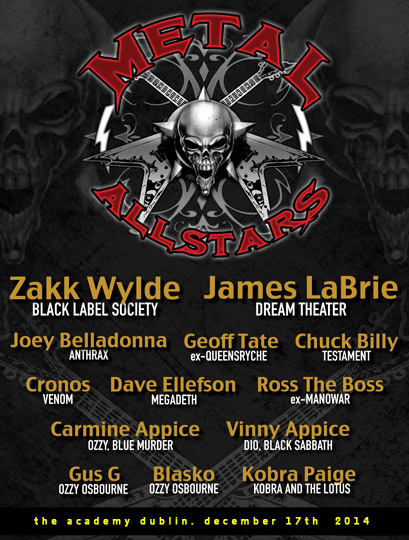