Metal icons Metallica recently paid the UK a flying visit with a selection of indoor arena shows in support of the bands’ new album ‘Hardwired…To Self Destruct’ and Overdrive was present for their second (record-breaking attendance) night in London’s O2 Arena! 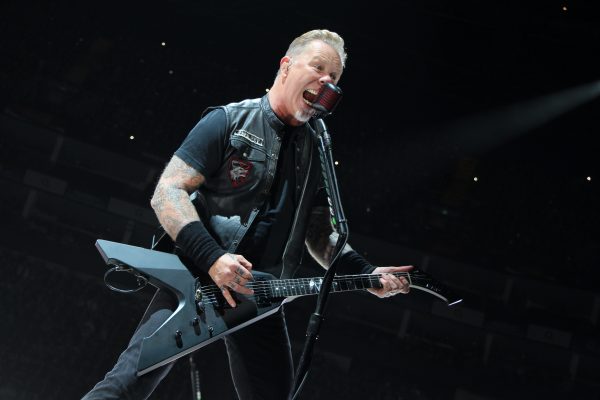 The O2 Arena, (located in London’s Docklands) is a vast structure that seems to inhabit every possible basic human need, should we find ourselves in a post-apocalyptic, zombie-infested wasteland. With a security infrastructure similar to an airport security system in full force (including priority ticket access) that featured metal detectors, x-ray scanning machines and a small army of uniformed staff, we finally found ourselves on the other side of the huge glass partition, away from the endless queues of black-clad, giddy punters,  and wandering around a sort of Metallica themed Disney park for adults!

Hotdog stands, popcorn, burgers and cold beer offerings lurk in the shadows when compared to the infestation of Metallica merchandise stalls that litter the glowing halls of the arena’s bustling passageways. Strangely enough, we struggled to find a single item from supporting band Kvelertak on sale anywhere!

Speaking of Kvelertak, the band’s entrance to the arena’s stage sparked a welcoming response from the waiting punters, urging us to take our places for the show. Having seen Kvelertak many times, I have no doubt that an incalculable level of pressure would be percolating amongst the band members as they climbed the steps of the huge centre-stage production before launching into the opening track, ‘Åpenbaring‘ which seems a little lost at first, when challenging the enormity of the O2’s cavernous interior.

Considering their normal setting for live performances, Kvelertak makes use of the stage well and work the 360° vantage points giving the now rammed arena a dose of crossover hardcore/extreme/metal and punk flavourings in the only truly unique way they can.

A few bemused, slack-jawed punters try to make sense of the Norwegians, but we all knew that was always going to happen as I’m guessing that a large portion of tonight’s crowd are most likely ‘tourists’ when it comes to anything outside of the Rock n’ Roll Hall of Fame roster.

Finishing with ‘Månelyst‘ and ‘Kvelertak‘ the guys take a bow and leave the stage to make way for tonight’s headliners! 3.8/5 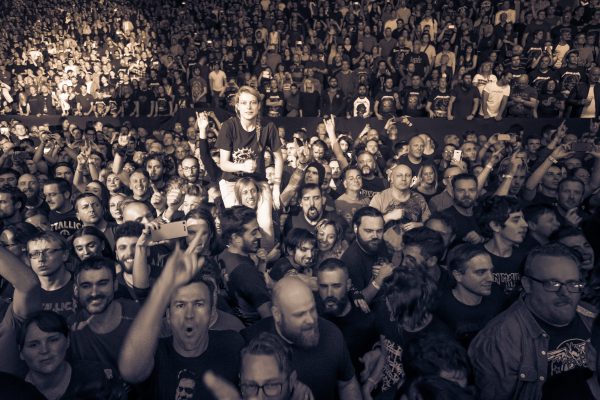 Everyone has a Metallica memory but for me, seeing them pull off an indoor show was a must that I simply could not refuse! Having seen them many, many times over the last few decades in many continents, there was something about this show that I just knew was going to be special.

As the lights drop for the ceremonial intro ‘The Ecstacy of Gold‘, London’s O2 Arena is liberating deafening levels from the frantic crowd with a tremendous level of excitement and collective energy hovering in the air like a radioactive cloud!

James, Lars, Kirk and Rob launch into ‘Hardwired…To Self Destruct‘ flexing their collective muscle’s and releasing the operating system of their spectacular multi-media stage production, much to the glee of the arena’s rabid punters.

‘Atlas, Rise!‘ comes off as punchy as the bands highly-regarded older material and fits in perfectly alongside the iconic anthem that is ‘Seek and Destroy‘, which triggers a vast sea of bobbing heads and swirling bodies, stretching to all corners of the arena and is tremendously satisfying to witness.

With little between-song banter from Hetfield, the band continue with ‘Leper Messiah‘ and ‘Fade to Black‘, which is digested with the enthusiasm of a home cooked meal, just like your Mom used to make.

The ongoing war of words debating the relevance of Metallica in 2017 is quickly put to rest as Lars, counts in ‘Now That We’re Dead‘ which thunders under the arena’s roof and rains down upon tonight’s lucky punters. As Hetfield predictably asks, “Are you alive out there?” and “Can you feel us?“, the deafening response confirmes the audience is firmly in the man’s hands.

As the band’s crew adjust Ulrich’s rotating drum platform at certain intervals during the show, it’s impossible not to be blown away by the overall spectacle of tonight’s stage production. Large LED cubes descend and ascend from above the stage with ease throughout the performance, offering a vast selection of vintage footage of the late Cliff Burton as well as a montage of flyers/posters and photos from the bands spectacular legacy mixed in with actual live footage from the stage at various points of the show. 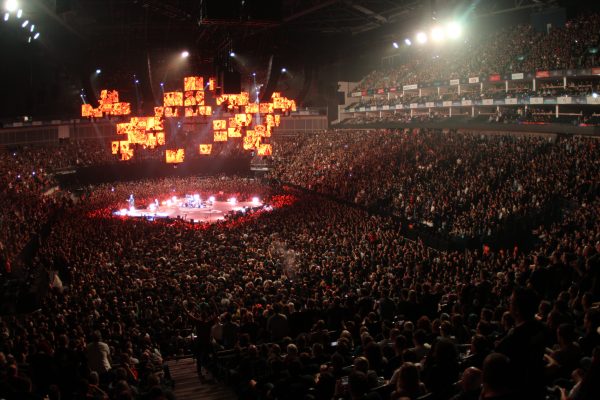 The introduction to ‘For Whom The Bells Toll‘ bings Trujillo to the east side of the stage as he encourages a stomping chant accompanied by a low-end bass lick that melts-faces in the front row. The sheer majestic pulse of ‘For Whom…” is enough to set the hairs on the back of all 20,000 necks skyward as each verse sails from Hetfield’s lungs like a silver bullet.

The only dip in the show’s flow, which not only had me scratching my head but also many confused punters throughout the venue, was Hammet and Trujillo’s solo medley, which consisted of a hybrid version of Ace of Spades and Phantom of the Opera. Surely, there was room for another classic from their back catalogue or perhaps a short burst of some Garage Days’ nuggets such as Green Hell, The Prince or The Wait instead? Oh well, you can’t get it all I suppose. 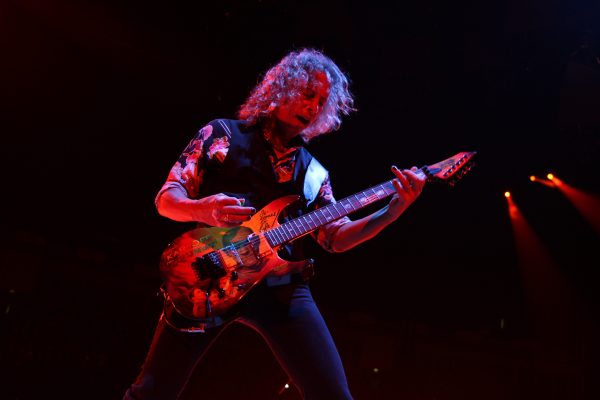 What we did get was ‘Last Caress‘ which was like a bolt of unexpected lightening that took us all by surprise which was quickly followed by ‘Creeping Death‘! Fantastic stuff!

New track ‘Moth Into Flame‘ is dedicated to the late Amy Winehouse which commanded a respectful applause from the crowd before the band launched into the opening moments of the track. The spectacle of moth-like drones emerging from beneath the stage, was an eye-rubbing site to behold, as they fluttered and formed synchronised sequences immediately above the stage like some type of futuristic characters from one of the Transformer blockbuster movies! 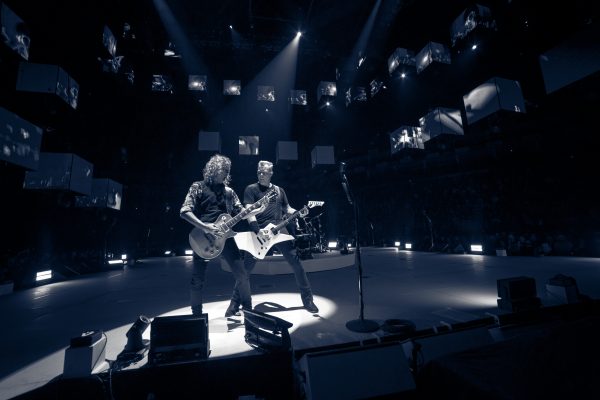 A small bit of banter and some light-hearted onstage behaviour gives the impression that all is rosy in the Metallica camp right. Sold-out tour dates, a platinum-selling new album as well as merchandise that can’t be manufactured fast enough due to the demand here tonight, is a good enough reason to be in a light-hearted mood, don’t you think?

A slew of classics in the form of ‘Sad But True‘, a ropey version of ‘One‘, thanks to Ulrich’s sloppy foot peddle antics and the mighty ‘Master of Puppets‘ sends The O2 Arena into a frenzy before an encore brings us face to face with the live debut of ‘Spit Out The Bone‘, ‘Nothing Else Matters‘ and their commercial calling card, ‘Enter Sandman“. 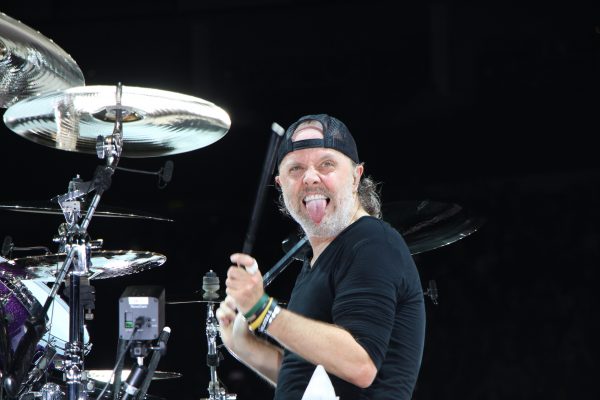 As they bid their farewell and disappear into the shadows, the Metallica “family“, to which they refer to quite frequently, seems to be in rude health and thirsty for more! There is a sense that this is a mere sample of what Metallica have in store for 2018, as I’m sure ideas of Summer evenings under amber skies are almost inevitable. Watch this space kids!

Metallica’s iconic ‘Master of Puppets’ re-issue is released today (November 10th). Get all the details on this awesome new addition to the bands discography on this link. 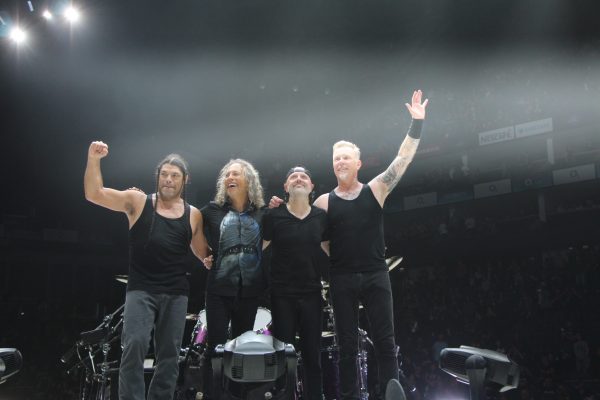