METALLICA played a “pop-up concert” at Metro in Chicago Monday night (September 20th) and their setlist was immense!

The venue made the announcement at 1:30 p.m. and within an hour, the show was completely sold out.

The tickets sold for just $19.83, a reference to the year 1983, which is when the band last appeared at Metro.

METALLICA, which played a “surprise” concert at The Independent in San Francisco last Thursday (September 16), announced the Chicago concert on social media, writing:

“THAT was way too much fun last week as we finally played in front of real live fans for the first time in over two years in our hometown of San Francisco. So why not do it again. This time we’re in Chicago and we’ll be hitting the stage at the storied Metro on Clark Street tonight… our first time back there since 1983!!”

Metro didn’t reveal how many tickets were sold, but the venue holds about 1,000 people.

METALLICA’s setlist was as follows:

METALLICA will return to the festival stage on Friday, September 23rd, and Sunday, September 26th, when they are scheduled to play a pair of unique sets in Louisville, Kentucky at Louder Than Life, the first of three U.S. festivals the band will perform at this fall in partnership with promoter Danny Wimmer Presents.

The bands’ 30th-Anniversary reissue of their seminal ‘Black Album’ is now available from all good records stores with ‘The Black List’ release coming on vinyl later next month.

To celebrate the bands’ 30th Anniversary of the ‘Black Album‘ Overdrive in conjunction with Universal Music Ireland are giving away a very limited Metallica Varsity jacket and all you have to do to enter is follow the instructions on the graphic below. You can find all our official links here. 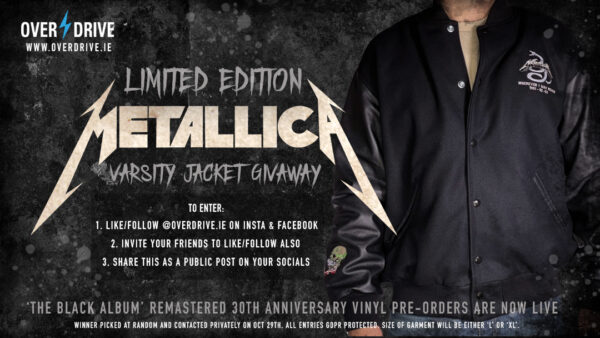 Check out footage of ‘For Whom The Bell Tolls’ from last nights performance below: