Best known for his time as frontman for legendary punk rockers, The Misfits, Michael Graves and co will be taking to the stage in Ireland’s capital for one night in Dublin’s Voodoo Lounge. Get full details on the link below and be in with a chance to win passes to the show; 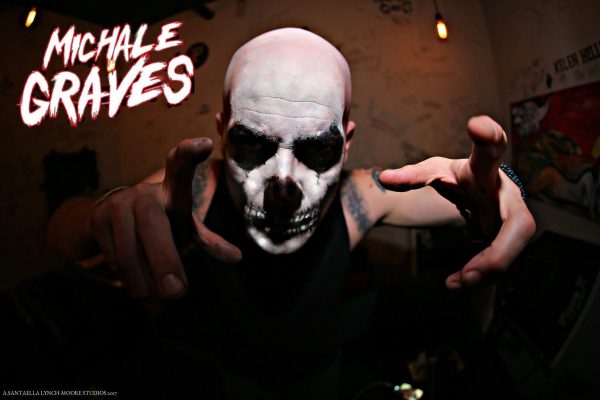 Michale Graves kicked in the door of the music scene in 1995 as the lead singer and songwriter of one of the most legendary punk rock bands of all time, The Misfits.

Third of 3 videos produced, his song “Scream” was directed by George A. Romero, the same man who directed “Night of The Living Dead”. Michale appeared in Romero’s film “Bruiser” performing “Fiend Without a Face” which was also penned by Graves specifically for Romero’s film.

Michale continued to tour as usual aside of the days that he spent appearing and wrestling on Ted Turners‘ WCWs’ Monday Nitro, Thursday Thunder and a pair of pay-per-views alongside his good friend Vampiro. In early 2000 Michale collaborated with Don Oriolo Jr. and wrote and recorded with him a song called “No More Moments” for his film “Campfire Stories” which starred David Johansen.

In 2001, Graves left The Misfits and went out on his own. He independently released a solo record entitled ‘Graves’ Web of Dharma supported by two American Tours. In 2003, Michale embarked on a new project he called ‘Gotham Rd’. The band played hundreds of raucous dates on the U.S. Club circuit.

While entertainment is at the heart of who he is as a performer, Graves is also a social and pop-culture media thought leader who has hosted as well as appeared on and in numerous broadcast and print properties.

For nearly 2 decades Michale Graves has been entertaining, influencing and informing a growing audience worldwide. Driven by the pursuit of quality and harmony in everything that he is involved in, Michale has travelled the world – every continent except Antarctica – and has looked into the eyes and hearts of tens of thousands. His journey as an artist has ignited a passion, a passion that motivates his desire to reach out, create a dialogue and build a platform to discuss and interact on pop culture, people and the world around us.

Q – What year did Michael Graves join The Misfits?

Post your answers on the official Overdrive Facebook link, which you can find by clicking this link.

Winner picked at random and contacted privately on Friday, 21st September. +18 only.