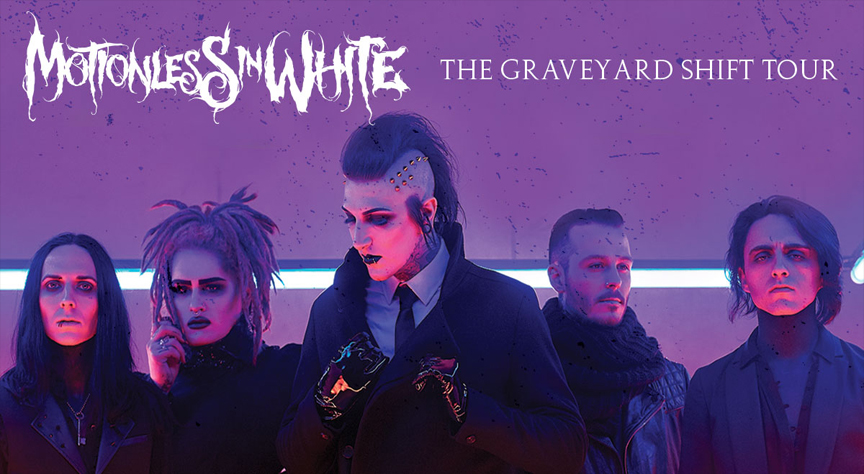 ‘Graveyard Shift’s striking sleeve artwork was selected from over 2000 competition entries from fans and designers, in partnership with Creative Allies. The contest’s winner, Crystal Johnson, created the album’s cover as well as other elements in the album package. Check out the album cover below; 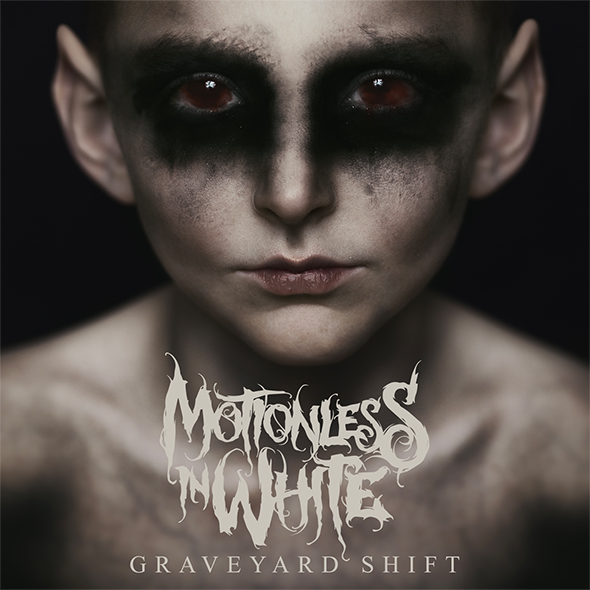 The album also features a guest appearance from KORN’s frontman, Jonathan Davis, who lends his vocals to ‘Necessary Evil‘.

An industrial city situated in Northeastern Pennsylvania, you could say Scranton quietly prides itself on a tried-and-true Rust Belt blue-collar work ethic.

“We’re a band that came out of the small town blue-collar spirit,” affirms Chris. “We put ten years into growing this and working hard to do what we love the most. We look forward to putting in another ten. Both the area we come from and the fan base brought us to this point. ‘Graveyard Shift’ is all about that work ethic. It’s been instilled in us. Early on, we realized if you give the time and effort to chase a dream, it’s possible to achieve it by the sheer amount of drive and passion you have.”

Since 2006, that ethos has fueled Motionless In White’s rise to the upper echelon of modern rock. Albums such as 2010’s Creatures and Infamous in 2012 would galvanize a rabid fan base around the quintet. During 2014, Reincarnate reached new heights, bowing at #9 on the Billboard Top 200 and claiming #1 on Billboard’s Top Rock Albums Chart. The title track and lead single turned into a Top 20 Active Rock smash and notched 13.2 million YouTube views and 9.8 million Spotify streams. Simultaneously, they have shared stages alongside everyone from Slipknot, Korn, and Breaking Benjamin to A Day To Remember and Marilyn Manson in addition to making arresting festival appearances at Warped Tour, Aftershock, Rock On The Range, Rock Allegiance, and beyond.

In 2016, they entered a Los Angeles studio with producer and longtime collaborator Drew Fulk [Emmure, Crown The Empire] to record what would become Graveyard Shift.

“It was all about writing bigger, better, and more refined songs,” exclaims the frontman. “On Reincarnate, we felt like we had discovered our true identity. This record wasn’t so much centred on experimentation as it was on refinement. In the past, I feel like I always placed the vocals second to music. This time, there was a focus on trying to make sure the vocals had their big moments. That was a major key in really making Graveyard Shift separate from all of the other albums. I haven’t really been able to look back at anything I would’ve done differently or something I didn’t feel like I put my whole heart into here. I just feel incredibly confident about everything on the record.”

Motionless In White introduced this latest body of work with the galloping gut-punch of “570”—the area code of Scranton and something of a homage to home. In less than three months, it amassed 3.1 million Spotify streams and amplified anticipation for the full-length’s impending arrival.

“In 2016, I had the opportunity to meet with a lot of fans on Warped Tour and have some very intense, personal, and deep discussions,” recalls Chris. “I walked away from these meetings feeling energized. Whether the conversations were dark or uplifting, I was ready to approach anything in my way with how I felt afterwards. Our current single, ‘LOUD,’ is a direct result of that energy. I wanted to encourage people to feel the same way. It’s definitely one of the more powerful and inspirational messages on the album.”

Throughout its 12 tracks, ‘Graveyard Shift‘ weaves together various personal vignettes. From embracing one’s dark side on “Necessary Evil” [feat. Jonathan Davis] to the hypnotic and humorous ode to Danny Elfman’s influential body of work, “Not My Type (Dead As Fuck 2),” the record remains unpredictable at every turn. “Eternally Yours” signals a first for the group.

“It’s our first true love song,” Chris goes on. “There was a very poetic and romantic approach. That’s something, as a lyricist, I have been trying to explore more of within myself over the past few albums.  It’s a special song for all of us.”
Scranton plays a subtle role in the overarching narrative itself. Chris can recall finding early inspiration in the city’s once-fertile music scene, which slowly dissipated over the years. At the same time, he and his bandmates have transported that energy worldwide with Graveyard Shift.

“I like to think we’re taking our favourite traits of this area on the road and showing the rest of the world what Scranton created out of all that great camaraderie, those friendships, and the memories,” he says. “We all come from the same spot. It’s something I think many people all over the world can identify with. We’re not content to just sit still and let life happen. We want to show you can take the initiative, go out there, and make a difference for yourself. That rings throughout all of the songs and speaks to the true meaning of Graveyard Shift.”

Ultimately, Motionless In White have the power to electrify a new love for rock music in the process.

“We’re quite a simple band in terms of our intent,” he leaves off. “Turn off your head, detach from reality, listen to the music, and enjoy the songs. That’s what we’re encouraging. We want to give people something to latch on to away from life’s bullshit. I hope they walk away feeling their love for music was either restored or upheld.”

Q – What is the name of Motionless in White’s vocalist/frontman? 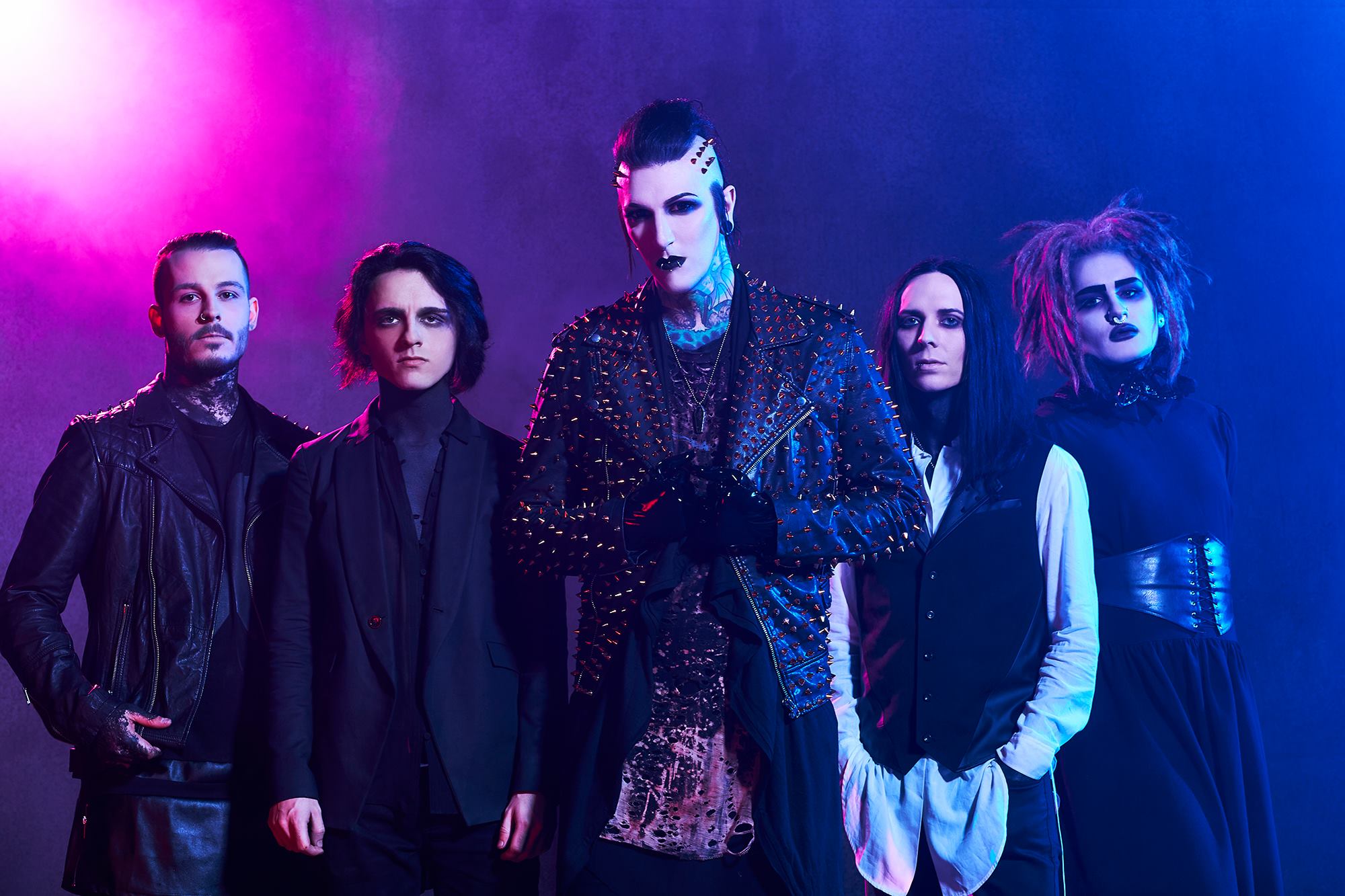