Among the youngest bands ever to storm the metal genre, Death Angel has come to be known as one of the most influential bands to emerge from the thriving Bay Area Thrash Metal Scene in the early 1980s and they have just dropped their new album “The Dream Calls for Blood”. 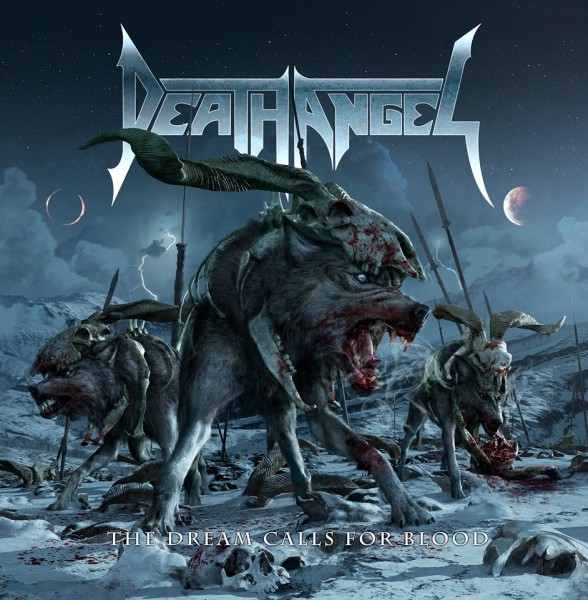 DEATH ANGEL’s seventh “The Dream Calls For Blood”, was released on October 11 in Europe via Nuclear Blast Records. The follow-up to 2010’s “Relentless Retribution” was recorded at Audiohammer Studios in Sanford, Florida with producer Jason Suecof (TRIVIUM, AUGUST BURNS RED, THE BLACK DAHLIA MURDER, ALL THAT REMAINS, WHITECHAPEL, DEVILDRIVER), and once again features cover art by Brent Elliot White (JOB FOR A COWBOY, CARNIFEX, WHITECHAPEL). Fans are able to purchase a standard jewelcase version of the album or digipak edition that includes a bonus track and bonus DVD.

04. The Dream Calls For Blood

* The Making Of “The Dream Calls For Blood”

In a recent interview with Metal Covenant, Rob Cavestany stated about “The Dream Calls For Blood”: “The title is basically our motto. It’s what we’re talking about, you know. In our point of view the dream being our band and keeping the band going and making music for your life. The blood is all the sacrifice and all hard work that goes into it and that’s the metaphor for that. It’s not only meant for music. It’s also meant for other people to relate in their own life and goals that they’re trying to achieve and the sacrifices that it takes to achieve these goals. And along with that, there’s also a tinge of aggression in there about other people that cut corners and don’t quite go through all the steps it takes to achieve the goal the right way. So there’s a little bit of a middle finger to those people that go about it that way and don’t fully respect what it takes.”

DEATH ANGEL’s North American headlining tour in support of “The Dream Calls For Blood” will kick off on October 18 in San Francisco. Support on the trek will come from 3 INCHES OF BLOOD, BATTLECROSS, REVOCATION and DIAMOND PLATE. There has been no dates as yet for an Irish show.

Check out the stream for the new album here.