Pop-Punk upstarts New Found Glory, return to the Irish capital to get the party started. We sent down our scribe Karyn Corrigan to check out the gig. 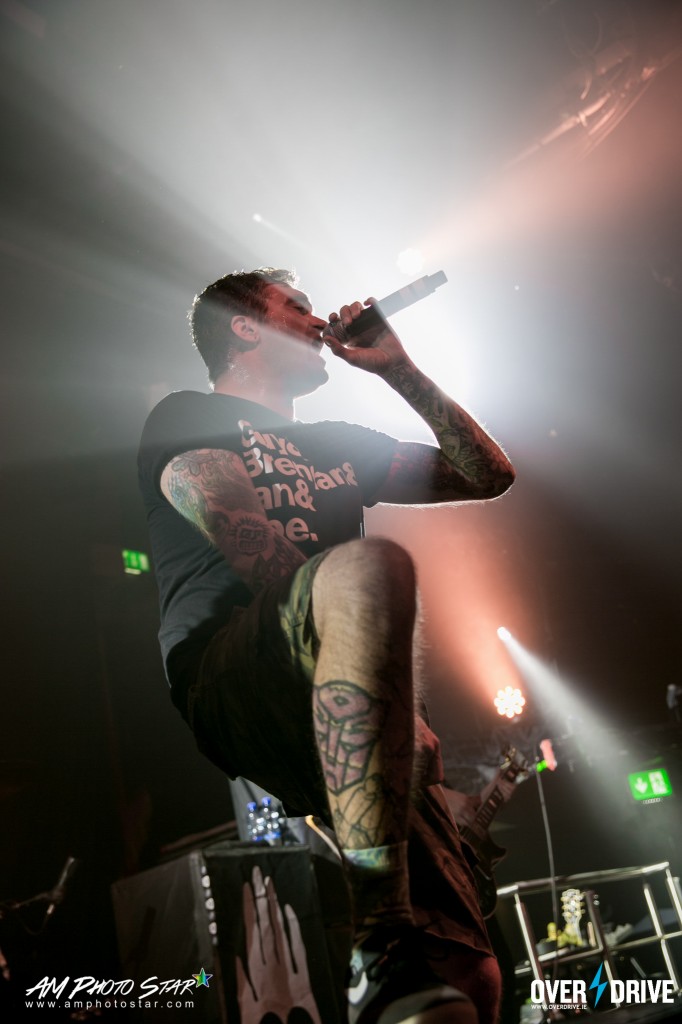 Opening up the show tonight is Only Rivals, who are a young band from Ireland who will be joining New Found Glory on their Ireland/UK tour starting in Dublin’s Academy venue, tonight (November 12th). Coming on stage looking very grungy with plaid shirts and old jeans, the guys burst into their first song with vigor, establishing themselves as a punk band straightaway. They are original and edgy, with the vocals being quite raw at times. 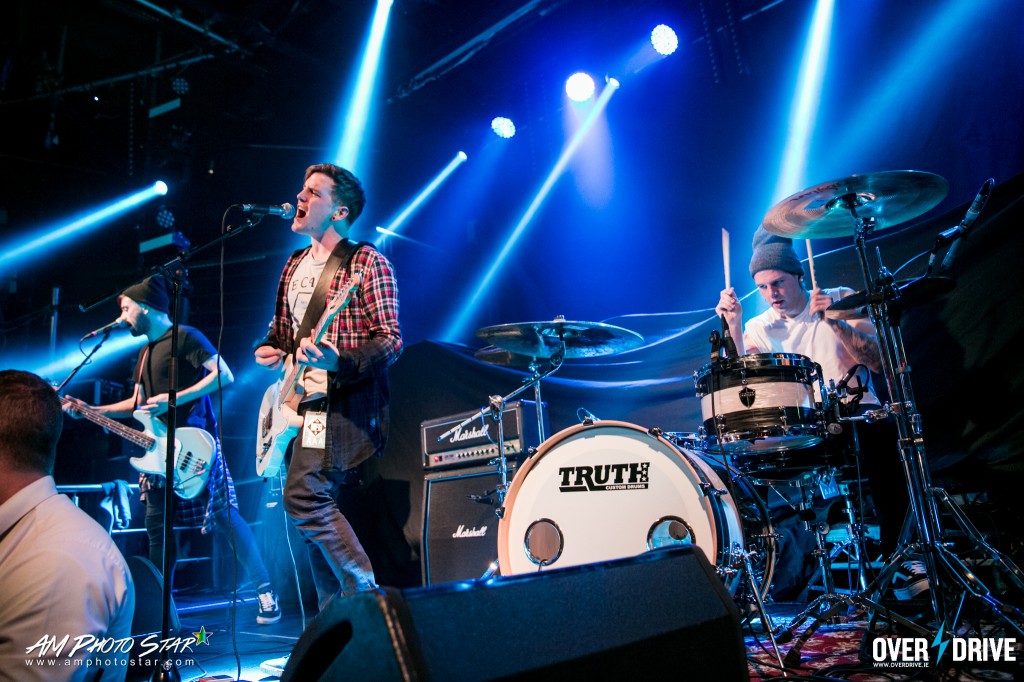 As the opening band for New Found Glory the venue was sparsely populated, but this did not stop the band enjoying themselves or the crowd revel in the performance. Playing tracks from their EP ‘Details’ launched back in February the band got the crowd moving and clapping. They get great feedback while playing “Surgery” and “History“, with people clapping to the snare beat and jumping. They finish their set with the anthem “Borders“, leaving the crowd wanting more. This is a band to watch out for as they have great potential . 4/5

Candy Hearts are next and come all the way from New York, USA. With front woman Mariel Loveland leading the band, it is hard not to think of Paramore and similar sounding bands. There are fans in the audience who flow forward as the band starts to set up. All onstage have great energy and are probably used to playing to bigger audiences back home. They make the most of the ever growing audience entering the venue. They have catchy, easy melodies to sing to; there are a few head boppers in the audience. 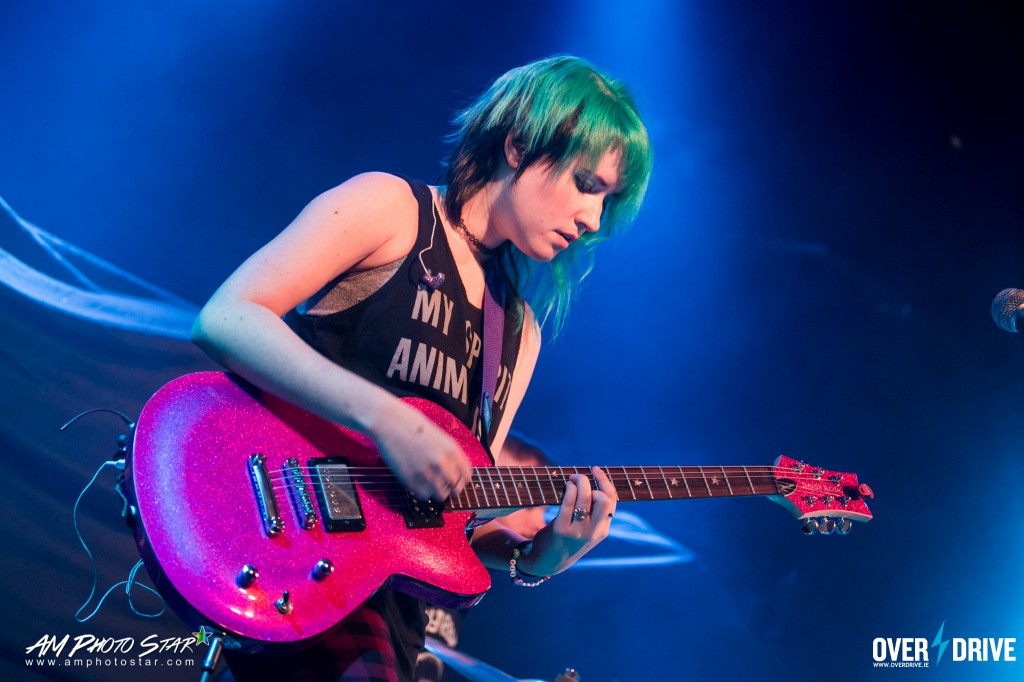 When they play their title track “I Miss You” the crowd recognise it and start to sing. Someone is clearly heard, from down the back of the place, shouting “You’re pretty” after this song. The band leave the stage quite rushed while the stage is made ready for the main attraction. 3.5/5

This is the first night of the ‘Pop Punk’s Not Dead’ tour and New Found Glory take to the stage like the kings of pop punk that they are. Blasting out hits like “Hit or Miss, Dressed to Kill, All Downhill from Here” and many more, people from all ages flock to see the pioneers of this genre give another notorious energetic performance.

A drum kit is unearthed beneath a black cover. With graphic images on bands amps on either side of the stage depicting very different things – a crown, skull – we are not sure what to expect from this band, but the teddy of Sesame Street’s Elmo instils trust upon us. As the late arrivals flock in, the outer boundaries are packed while there are pockets of free space in the circle. There is a small platform built at the front of the stage about a foot wide with no indication of what this will be used for. No other props are added which would be impossible anyway as the stage is so small. 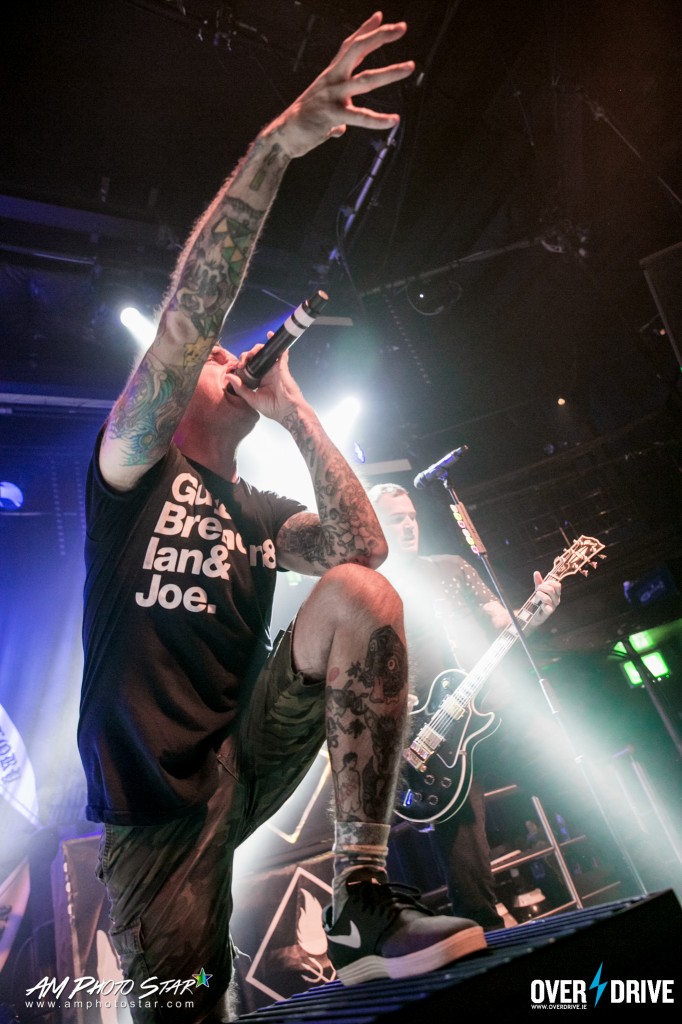 All of a sudden the lights go down and a projector to the right of the stage is engaged. At the back of the stage a presentation begins. Judy Garland appears singing the Battle Hymn of the Republic. All eyes are glued to the performance that we barely notice the band come on stage. The band enters from the left and guitarist Chad runs to the right end of the stage while bassist, Ian waltzes to the left with his trademark no top on. Drummer Cyrus takes his seat behind his kit and the band breaks into “Selfless“. Jordan runs onstage to complete the quartet, settling himself perched on the newly erected platform. The crowd pours forward jumping and holding fists to the sky; there are high expectations for tonight. The three guys are bounding around the stage looking into the crowd eager to please and enjoy themselves. A fan hold a sign to the band reading ‘FHRINTP’ and ‘Ian is sexy’; Jordan laughs mid-sentence. His greeting to Ireland is “Dublin Motherfuckers” as the crowd erupt with cheers and screams.

By the third song the crowd is fully engaged and this band knows how to get the audience to participate. The crowd scream the key words back to the band for “Don’t Let Her Pull You Down“. It is evident at this stage that Chad doesn’t need to do any backing vocals, the crowd is happy to take this role on. New Found Glory are known for their audience participation and this night is no exception. 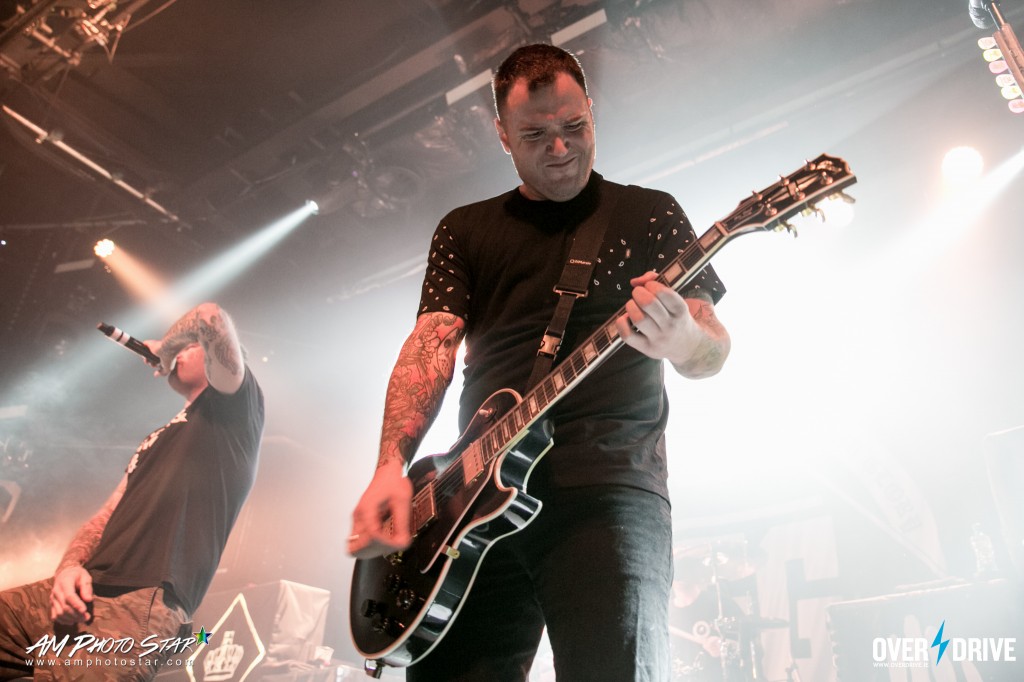 After “Oxygen” the band take a rest as they talk to the crowd, with Chad and Jordan taking to their mics and chatting effortlessly. They introduce their next track “Resurrection”, the second song off their new album and title track. The band are in their element as they move around the stage not once bumping into each other. They seem to sense each other’s positions and why not, they have been together for seventeen years now. This is second nature to them.

For “Hit or Miss”, it is every young girls wet dream to be upfront! For this tune, which is very Blink 182’esque, Jordan goes down to the barrier and leans into the crowd. He takes it in turns to sing one line and lifts the mic so the crowd sings the next. The crowd are so tight that they cannot move. People at the back are pushing forward to get closer. Before the end of the song he runs onstage again to spur more movement screaming “Come on Dublin, get the fuck up”. Everyone jumps including the band.

The band are expecting a lot from the crowd calling for a circle pit for “Something I Call Personality” and the crowd build up speed and energy in response, until the guys need another brief rest and chat with the crowd. A pause before “Ready & Willing” is aired see’s Chad take the time to explain this new song. He explains to everyone in the room to understand that life is full of pressure put on by those around us. We should not be afraid to try and to fail as failure means we learn. “Ready and Willing” is about failures the band have been through and they have learned a lot as a result.

Jordan jumps across the stage awhile giving it his all and Chad claps with the crowd in between guitar strums. Both Ian and Cyrus are lost in the loud and imposing bass of the song and mirror the crowds hypnotic head bangs to the beat. 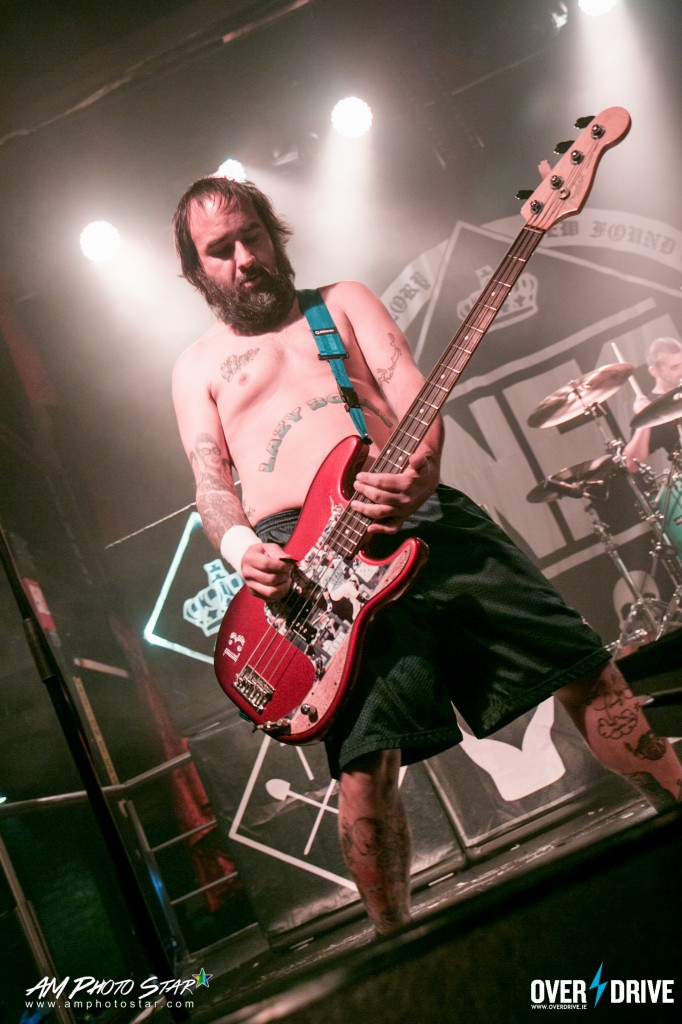 The familiar riff for “Kiss Me” is unleashed and all those who retired to the back of the venue to rest rush back into the crowd again screaming the words. The older members who hid down the back participate for this one and this energy is present for the next few songs, as they play both new and old tunes that the crowd scream along to. Two teenagers get overwhelmed by the hormones floating around and take the song too literally as they make out in the midst to the carnage. They are not the only ones getting carried away as Chad hurts his finger while moshing with his guitar to “Dressed to Kill”.

To coax involvement from the crowd for the next song, Jordan claims the chorus is so easy that Ian can sing and play bass at the same time and Ian shows us that he can. The crowd cheers and joins in as the band breaks into “Stubborn“.

The crowd are getting tired now. This is an all ages gig and the younger ones should be in bed. The bands remedy for this is “Truth of My Youth“, whose fast drum beat is just what the doctor ordered. The crowd soldiers on singing, screaming, jumping, moshing and enjoying this great show, until the band takes it down a notch and talks to them.

Chad speaks of the ‘Pop Punk’s Not Dead’ show that should kick off in the UK the next day and how they decided that just like in 2012 they would kick off their European shows in Ireland. This means that they finished their US tour, took seven hours of rest at home before flying to Ireland to start the madness again. The crowd revere this decision and with subtle hints from the band for a pit, for the last song of the show, the crowd give it their all. “My Friends over You” sees the crowd reach a new height with crowd surfing no longer a possibility but a reality.

The boys disappear off stage briefly changing their guitars/basses and reappear for their three and a half song encore. They promise us that they will be touring to promote their new album and they will definitely be back in Ireland very soon, but until then they have one more song for us. “All Downhill from Here” comes with a mosh pit, as everyone expends the last of their energy before the night is over. 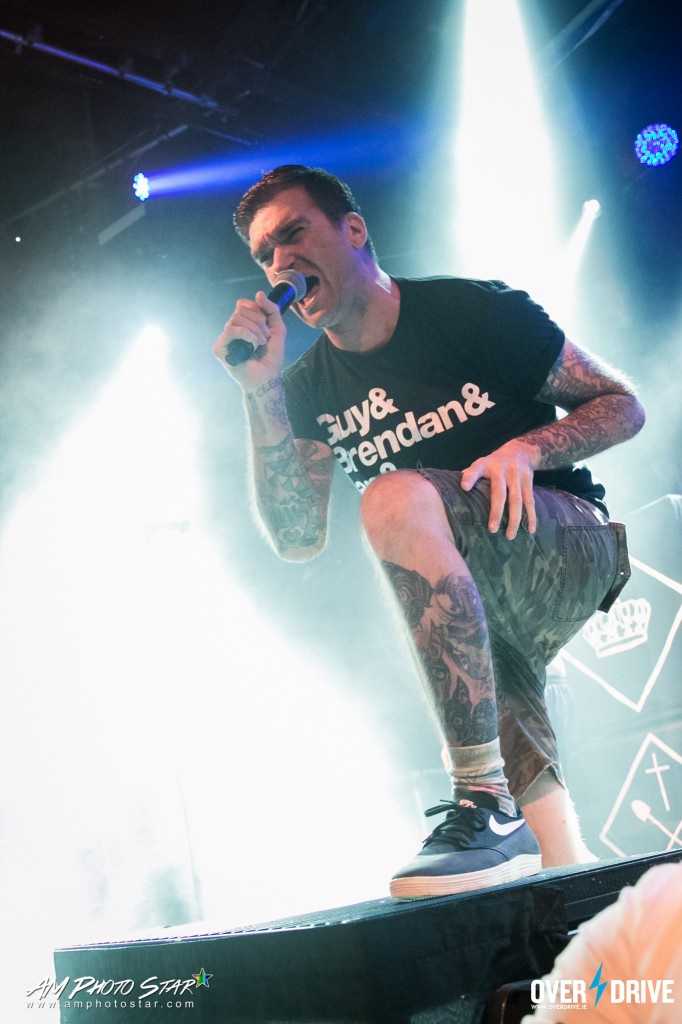 Jordan is a leading and engaging frontman for the duration of the show making everyone feel very much part of the performance. He looks people in the eye and points to individuals, taking the time to include people. His voice is still as young as it has ever been and this could be owing to the fact the he encourages the crowd to sing as much as possible – the crowd sings about half the set with him. Leaving the gig, the crowd is exhausted but pleased. They put this gig on par with New Found Glory’s last gig showing that the guys can still put on an amazing show after seventeen years of ups and downs. 4/5

Check out more photo’s from the gig below:

3. Don’t Let Her Pull You Down

7. Something I Call Personality

8. Listen to Your Friends

9. Anthem for the Unwanted

• All Downhill from Here 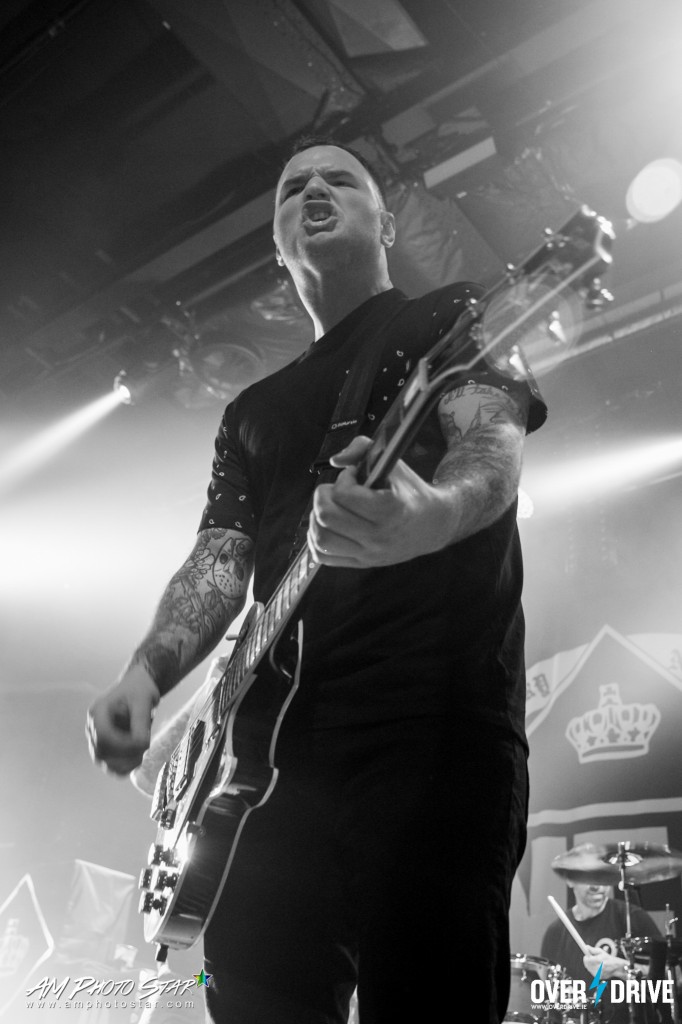 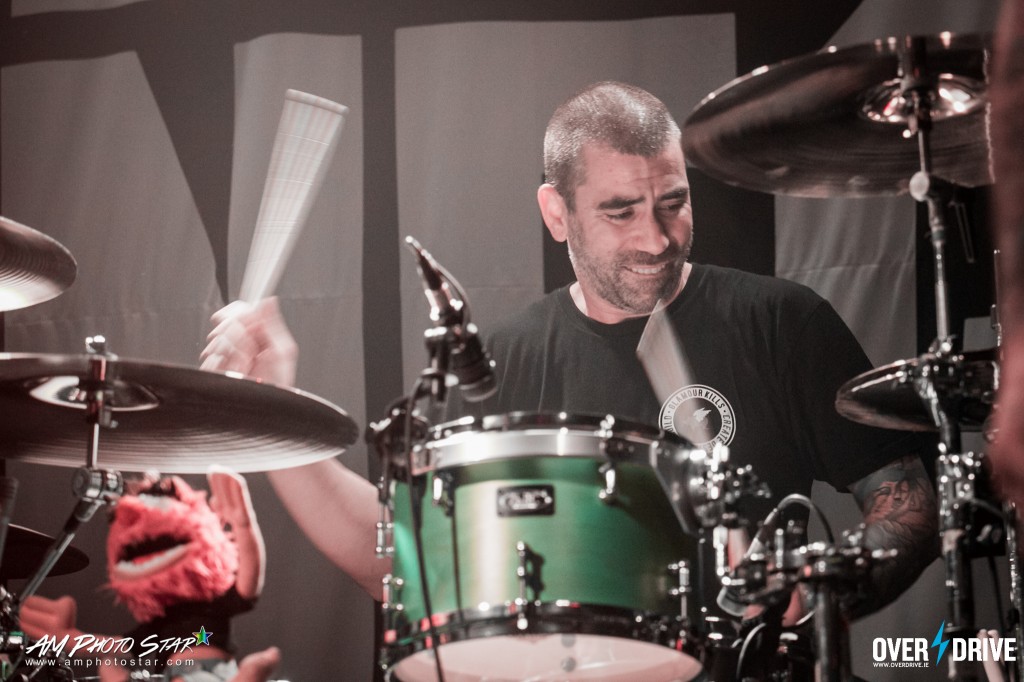 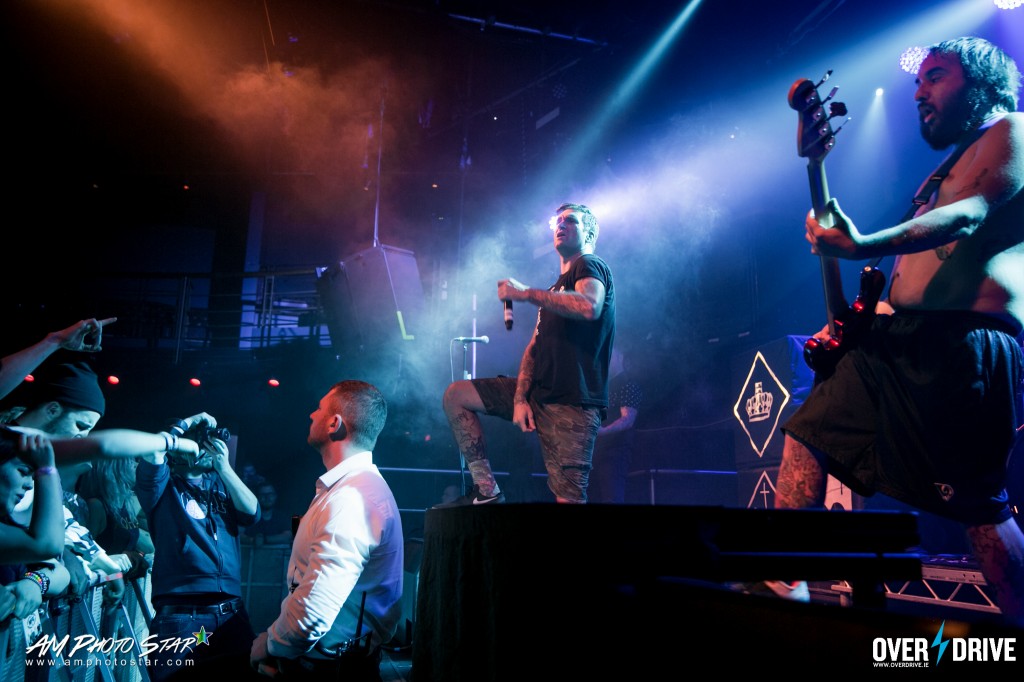 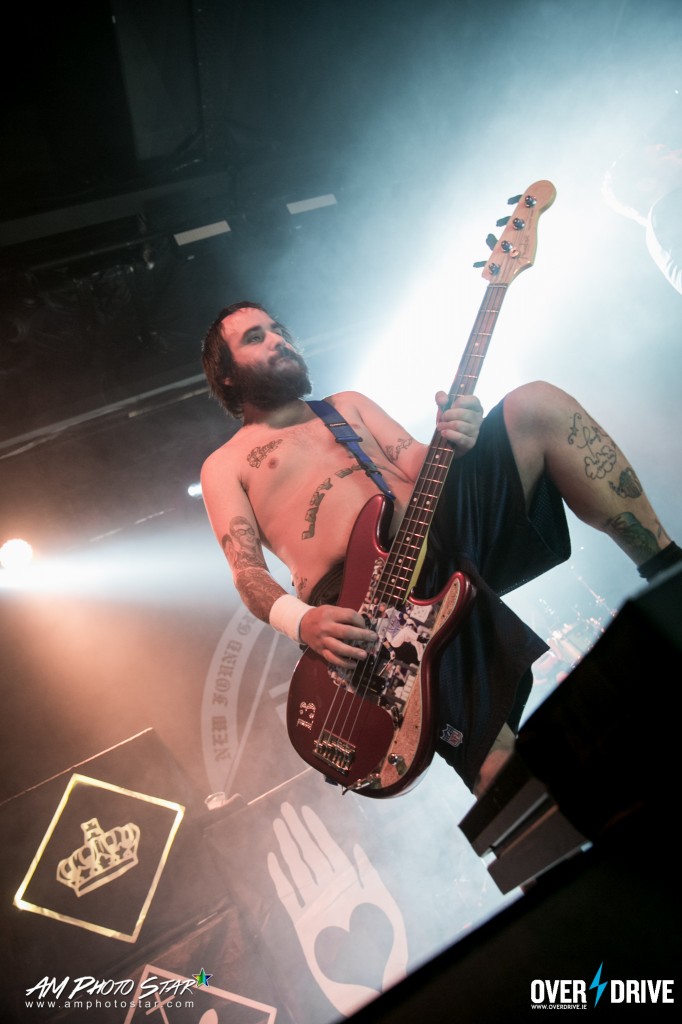 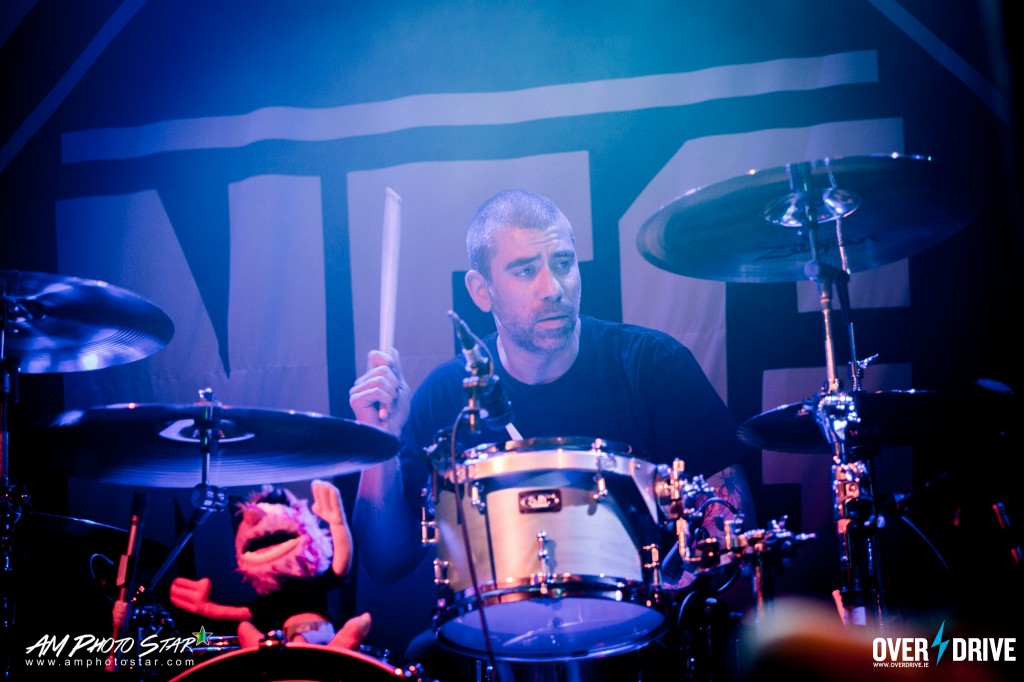 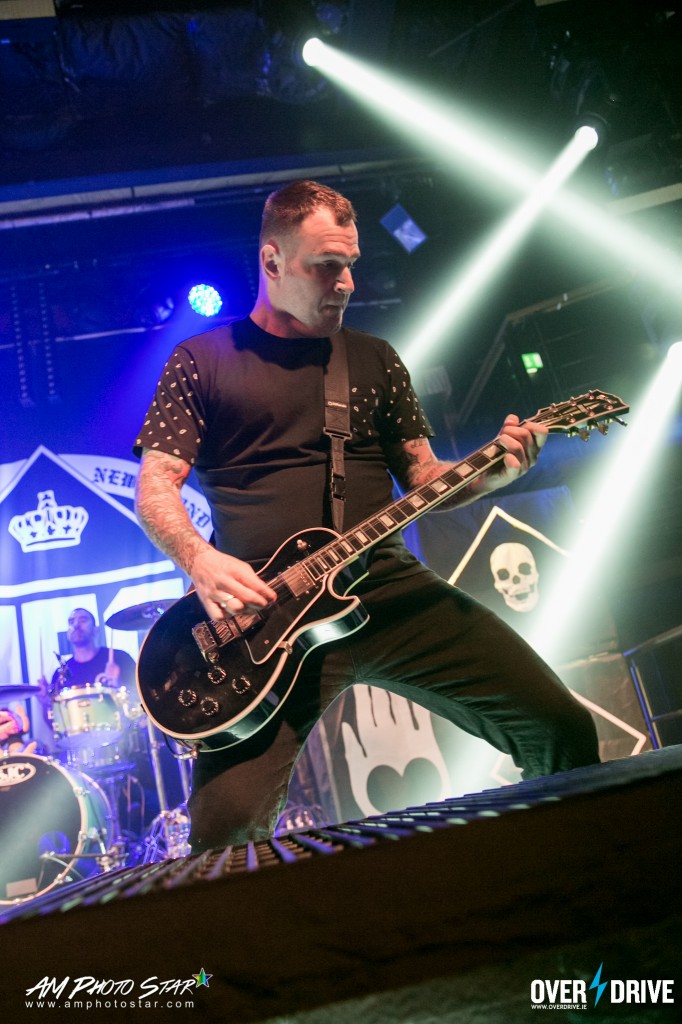