Overdrive is happy to share the news of a brand new Metal magazine, ‘FISTFUL OF METAL’ which will hit the shelves of your local newsagent later this month. Find out more below… 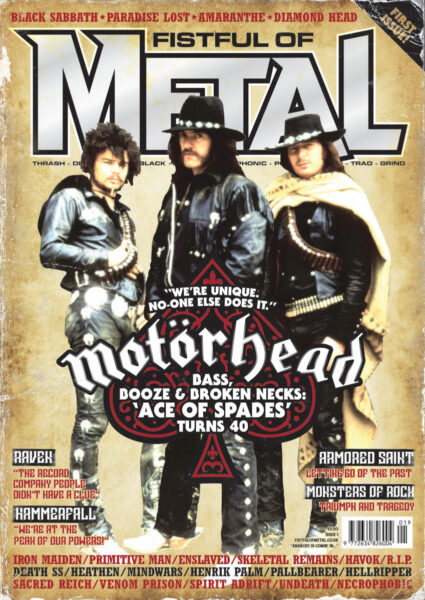 In a time when most well-known print magazines have lost their way, or sadly unable to continue due to the overwhelming influence of the internet.

If you’re of a certain vintage, you will most likely remember eagerly waiting for the next edition of your favourite magazine, which were packed full of great features, reviews and most importantly, giving a platform for up-and-coming new music.

Over the last decade, we’ve seen some of the most established magazines experience very challenging times with some having no other option but to shut their doors and others losing focus on their audience in favour of fads, advertising influencers, internal bureaucracy and God-only-knows what else. So, the news of Fistful of Metal is a welcome one indeed,

Pre-orders for the magazine are now live with the first edition set to be released on October 23rd.

Fistful Of Metal, the brand new heavy metal magazine, has revealed their debut cover. Featuring the inside story on the making of ’Ace Of Spades‘, MOTORHEAD lead the charge alongside the likes of HAMMERFALL, RAVEN, ARMORED SAINT, ENSLAVED, MONSTERS OF ROCK, AMARANTHE, MINDWARS, PARADISE LOST, IRON MAIDEN and many more.

Pre-orders are available now at this location, with the debut issue hitting shops on Friday, October 23, 2020.

Fistful Of Metal is a quarterly music title brought to you by Big Cheese Publishing Ltd, the successful team behind Big Cheese, Vive Le Rock, Down For Life and Louder Than War magazines for the last 24 years.