Technical death metal Egyptologists NILE are proud to reveal that their ninth studio album, ‘Vile Nilotic Rites’, will be released on November 1st via Nuclear Blast. 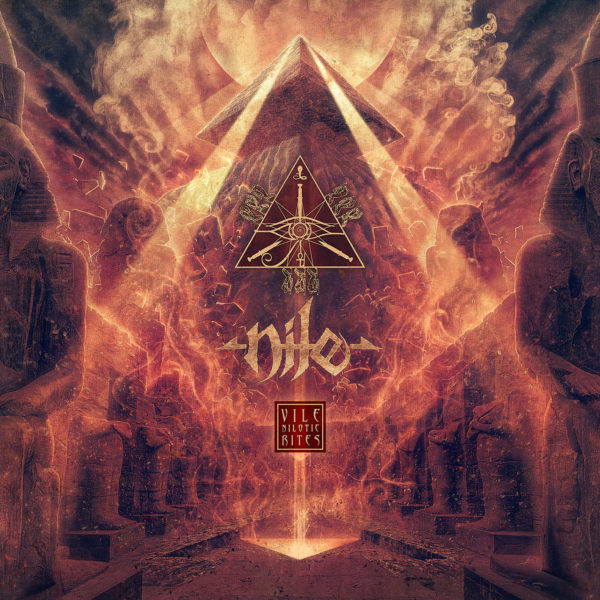 Today, the band gives fans a taste of the album with the release of the first single ‘Long Shadows Of Dread‘.

Watch the lyric video below;

Karl Sanders commented, “I am thankful the day has finally arrived that we can share with fans the first single from ‘Vile Nilotic Rites’. It’s the opening track on the new disc, and a song we will be thoroughly enjoying playing live on our upcoming EU and USA tours. ‘Long Shadows’ was chosen as the first song we want people to hear from this upcoming album as this crushing track should leave NO DOUBT in anyone’s mind concerning the uncompromising, brutal, destructive intent evident throughout the entirety of the ‘Vile Nilotic Rites’ album. I would also like to thank our fans who have been patiently waiting while we worked tirelessly to make this record undeniably the best NILE record in many years.“

George Kollias commented, “I’m super excited for the release of our new album and very happy our fans will finally get their first taste! It’s a special album for all of us since each member contributed on this a lot. I feel it represents the teamwork spirit NILE has right now and that shows on stage as well. I look forward to touring and playing these songs live for all the NILE fans!”

‘Vile Nilotic Rites‘ was recorded and produced by Karl Sanders at Serpent Headed Studios in Greenville, South Carolina with the exception of the drums which were recorded at Esoteron Music Studios in Athens, Greece with engineering handled by Jim Touras and George Dovolos. The album was mixed and mastered by Mark Lewis at MRL Studios. For the album artwork, the band returned to artist Michal “Xaay” Loranc who has worked with the band for over 10 years.

‘Vile Nilotic Rites’ will be available in the following formats in the UK:CD Digipack
Vinyl
Limited Edition White Vinyl, Purple Vinyl & Beige Vinyl
CD + T-shirt bundle
Pre-order your copy of ‘Vile Nilotic Rites’ in the format of your choice here.
Pre-save the album on Spotify, Apple Music and Deezer via this link.

‘Vile Nilotic Rites‘ track listing:
01. Long Shadows of Dread
02. Oxford Handbook of Savage Genocidal Warfare
03. Vile Nilotic Rites
04. Seven Horns of War
05. That Which is Forbidden
06. Snake Pit Mating Frenzy
07. Revel in their Suffering
08. Thus Sayeth the Parasites of the Mind
09. Where is the Wrathful Sky
10. The Imperishable Stars are Sickened
11. We are Cursed