NUCLEAR ASSAULT to release lost 1986 recordings from CBGB’s! Get Excited!!!


One of the most underestimated bands to emerge during the Thrash storm of the 1980’s has to be Nuclear Assault. A no bullshit, straight up avalanche of high pitched vocals, chainsaw riffs and pit friendly songs that would get any pair of high-tops covered in beer and blood! Well, get ready for a major treat, thanks to Nuclear Assault drummer Glen Evans and the very awesome Dry Heave Records. 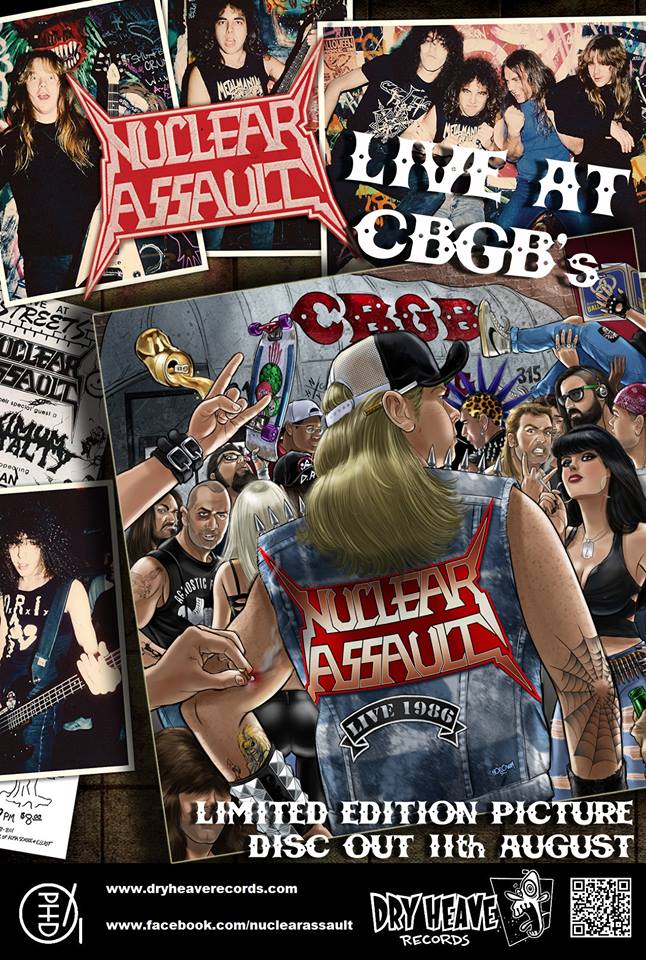 Dry Heave records are very proud to announce the released of a limited edition, live picture disc album from New York thrash metal legends Nuclear Assault. Recorded off the desk at CBGB’s, on to tape in 1986, drummer Glenn Evans has unearthed it from his personal archive and has personally mixed & mastered to a very high standard at his home studio. This 10 track recording pre-dates the release of their debut album ‘Game Over’ & includes two songs (‘Meteors’ and ‘Satan’s Call’) that were never officially recorded, either on a demo, LP or as B sides. The record’s insert contains a photo shoot inside the venue, live shots & old school gig flyers from the bands early years.

Nuclear Assault were among thrash metal’s most socially aware groups, making room for serious subject matter in their careening speed metal riffing. They also remained closer to the world of hardcore than most of their peers, and at their late-’80s peak released some of the most uncompromising thrash metal offerings of the time. After performing on Anthrax‘s 1984 debut ‘Fistful of Metal’, bass player Danny Lilker decided to jump ship and search for a more aggressive outlet for his music. Subsequent to a brief reunion of sorts with Anthrax pals Scott Ian and Charlie Benante, and ex-Psychos singer Billy Milano for the hugely influential S.O.D. opus ‘Speak English or Die’, Lilker formed Nuclear Assault with vocalist and guitarist John Connelly (also briefly a member of Anthrax in its formative years) in 1985. Guitarist Mike Bogush and drummer Scott Duboys (who would later join Warrior Soul) only lasted a few months before being replaced by guitarist Anthony Bramante and ex-T.T. Quick powerhouse drummer Glenn Evans. One of the Big Apple’s few challengers (along with Anthrax and Overkill) to the Bay Area dominance of all things thrash metal, Nuclear Assault became immediate contenders due to the cumulative sum of its parts — not to mention, their extreme nature and their ability to back it up with solid musicianship. Produced by metal stalwart Alex Perialas, their first album, 1986’s ‘Game Over’, was regarded as a breath of fresh air with its potent speed metal tinged with hardcore overtones. In the process, fans and critics alike instantly accepted it and the band was quickly off and gaining momentum.

The following year’s EP, ‘The Plague’ was an even more intense aural experience, but also managed to introduce Nuclear Assault‘s dark sense of humour with an ode to Mötley Crüe singer Vince Neil (fresh off his vehicular manslaughter rap) on “Butt Fuck” . With constant touring making up for their commercial limitations, the band continued to hone their craft in the studio, beginning with 1988’s immense ‘Survive’ and 1989’s outstanding ‘Handle With Care’. The latter proved that the group could refine their political speed metal and song-writing without compromising their anti-establishment stance, and was supported by successful Euro tours with thrash titans Exodus, and later U.S. jaunts with Testament and Savatage. 1990s ‘Live at Hammersmith Odeon’ video celebrated this great phase, and the band came off the road having won a healthy dose of new believers. 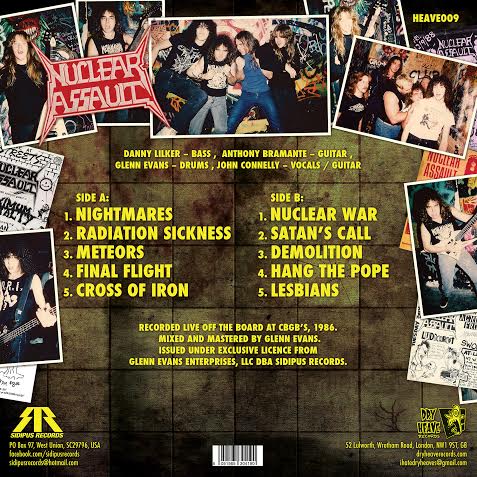 In 1991 they released ‘Out of Order’, but Lilker would quit soon afterwards to pursue his grindcore side project Brutal Truth. Due to inner-band squabbling of Connelly and Bramante, the latter would eventually fall out and jump ship as well. A revamped line-up featuring Connelly and Evans (completed by new guitarist Dave DiPietro and bassist Scott Metaxas) made it back for a new record, ‘Something Wicked’ in 1993. By this point though the intense interest in thrash as a genre had passed and the fad driven public had moved on causing the band to enter hiatus until they reformed in 2002 leading to a subsequent new album ‘Third World Genocide’ in 2005. Since that time Nuclear Assault have made sporadic live performances around the globe (with Dan Lilker back on bass) and plans are afoot for a swansong record, tentatively titled ’The Final Assault’ slated for a 2015 release.

Available from DRY HEAVE Records soon. Pre-Orders will be announced via DRY HEAVE website. This is a limited run of only 500 pressings so make sure you get your order in ASAP! 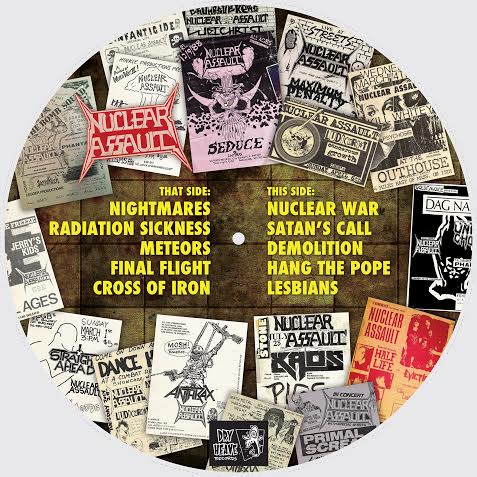