Looking out into the horizon of the Irish Music scene and one can only be flabbergasted by the sheer volume of quality bands and solo artists that lurk under every rock in our small Island. One band in particular is Oak Hollow, who display a talent of outstanding ability when placed in a live setting. Overdrive scribe Shaun Martin, took a trip down to the epicenter of the hipster “The Workmans Club” on Dublin’s Quays to witness the very front line of this exciting band as they launched their E.P.

Relative newbies to the professional arena and cutting their teeth with their superb EP “Life Masks”, Oak Hollow, are an up-and-coming bunch of dedicated musicians who just let rip on the mic, drums, guitars, and basically anything else that’s within arm’s reach. There’s nothing hollow about their sound: full of force and depth, chunky when it needs to be and sombre when it has to be. Frontman Dav Campbell (vocals and guitar), looks fresh faced and undaunted with the crowd that has turned up to see the band’s maiden voyage. His opposite number, guitarist Sam Killeen looks every part the rock start – that grin on his face from one end of the show to the other is hard to ignore – the dude is loving it. Bill Healy (drums) is holding the beats together like a pro, although he is buried behind speakers, obstructing the view that Adam “Gib” Gibson (bass), Campbell and Killeen seem to be revelling in. Such is the sacrifice of a drummer.

Support acts tonight came from Phazam Haze, a somewhat Primus-infused trio of (understatement alert!) OUTSTANDING ability, Radio Room, an indie 4-piece just after recording their debut album in Chicago ( I look forward to hearing it when its out), and local grungers, Punch Face Champions, with a definite Kyuss/QOTSA instrumentality about them, but much dirtier. I loved it. All 3 bands have upcoming shows and I highly recommend seeing them at the first given opportunity. Check their Facebook pages for further details.

I get a certain “Kings of Leon” vibe from Oak Hollow. There’s enough force behind the band that would put Yoda to shame. They open with “My House”….within a minute or two, the dancing starts. Bearing in mind that the Workman’s isn’t a very large venue, it’s very full. These kids have an underground following that has showed up in droves. Their second tune “Waste Away” was a little quieter, but still carried enough prowess to show that the band meant business. Crowd favourite “Unwound” finally gave the nod I had been waiting for – the ability to work a crowd into enough of a stir that when you start to play a song, you get that reaction from your fans after a few seconds that every band loves…that loud and prolonged “Yaaaaayyyy” in the middle of the music. I think this may have been the moment O.H. knew that they were going to be ok tonight.

Enlisting the help of 2 friends for backing lyrics on “Blue” dropped the tone for a while. Queue the lighters in the air and the to-ing and fro-ing of melodic balladry. Hey – it was an EP launch….not a rock festival. Tonight was about showing what they could do as a band, and not pandering to masses of people only wanting to hear one type of music. Not that O.H. would have any problem doing that. Young couples embraced and held each other watching the stage, and will fondly remember this night in years to come when O.H. are playing much larger venues, with well-known acts.

“Freedom” got the ball rolling again to get some more movement out of the attending fans. Killeen has impressive effects skills, and I dare say a little Tom Morello (Rage Against The Machine, Audioslave) trickery about his playing. Not one member of O.H. stands still for long, bar Campbell, but he has to – he’s in front of the microphone. When he’s not, he’s jumping around the stage with his comrades. Gib doesn’t stop bouncing for the whole show. Like I said earlier – they know what they’re at. Why not dance whilst they do it? Everyone else here is! “Orca” is the final song of the night… and as the music ends, Campbell makes no mistake about showing his appreciation for everyone who showed up tonight. 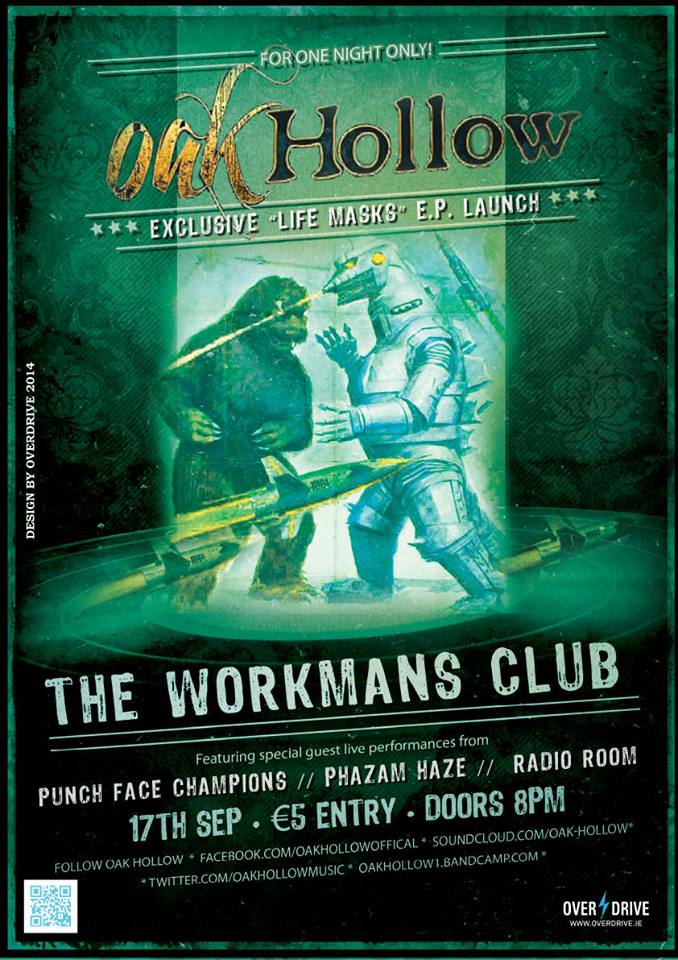 Re-iterating again and again the thanks from the band for the participation, the show ends. As the lights go up and the PA kicks in, the loud demands for an encore rattle the club. It doesn’t stop. The night isn’t done yet. The band returns, but they’re at a loss: they can’t play anything else, so they play “Unwound” again. The reaction is identical to the first time they play it. The people love it, so give it to them. They’re not the first band to do this, and they won’t be the last. They put a lot of work into their job tonight, and have earned a well-deserved break.

I hope that break isn’t very long, because once people get a taste in their mouth that they like, they want more. I’m no different. Overall, a fantastic night’s entertainment, and all for less than the price of a pint. Four bands, 3 and a half hours, and right on the bus routes which were still operating when the bands ended by 11.15pm. No real excuse to have missed them really. To be blunt, “Oak Hollow” are ones to watch in the future. I certainly will be.