No strangers to an Irish audience, Prog masters, Opeth pulled off a spell-binding performance in the Irish capital with special guests, The Vintage Caravan. Here’s what happened… 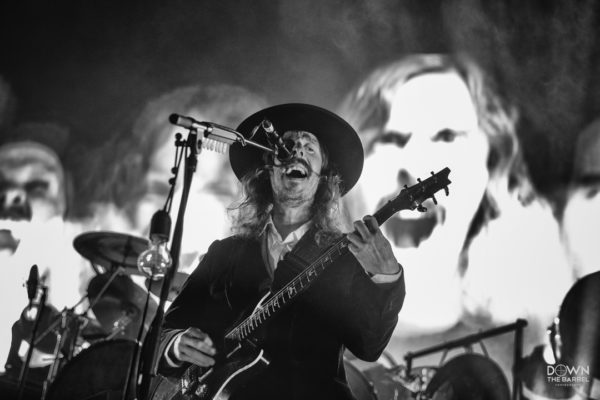 Tonight’s highly anticipated performance is sold out and with a healthy attendance in place for Icelandic retro hard-blues trio, The Vintage Caravan, who go about levelling the Olympia from the moment they hit the stage.

Tonight’s mix is super bass-heavy, with Stefán Ari’s bass kick thundering through the venue like an invisible steamroller. His into to ‘Expand Your Mind‘ is dripping with Bonham-style flare and it’s truly fucking epic.

The Vintage Caravan can do no wrong here tonight; and given the amount of swinging heads that are populating the venue as they smash through the infectious ‘Midnight Meditation‘, it would be no harm for them to return in the very near future for their own headline show.

Their last studio LP, ‘Gateways‘ is well worth your time as is their previous releases ‘Voyage‘ (2014) and ‘Arrival‘ (2015). A strong start to the evening’s entertainment with a band that I urge you to immerse yourself in. 4/5

Tonight is by far the biggest stage production I’ve witnessed Opeth tour with. As the stage hands remove the black cloths and unveil the layout of the stage, the instant tingling feeling that something truly special was about to happen is feverish. 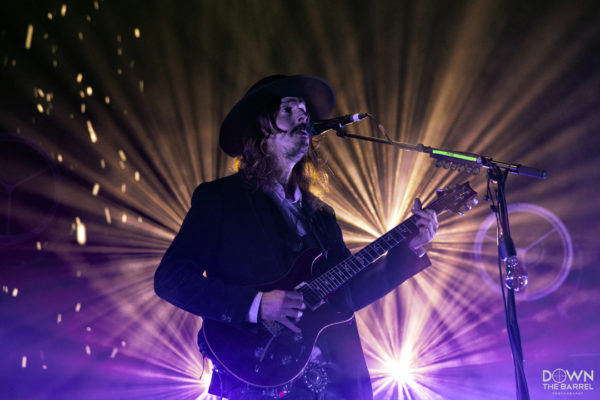 Tonight is very much a mixed-bag of Opeth gems from Blackwater Park’s (2001) ‘The Leper Affinity‘ to ‘Reverie/Harlequin Forest‘ (Ghost Reveries 2005), ‘Nepenthe‘ (Heritage 2011) and everything else in between.

Åkerfeldt’s dry humour is in full force tonight and generates genuine laughs throughout the venue as he give’s small antidotes betweens songs, which is just the total package with present-day Opeth. Clearly a band that are happy and comfortable with who they are and are content with their evolution in sound and songwriting.

I’m not gonna lie, it was tremendous to hear the band perform ‘The Lotus Eater‘ and especially ‘Deliverance‘ which was executed with a perfect balance of clarity and malice thanks to the crystal-clear sound mix. Kudos to the bands sound engineer.

A few nuggets from new album ‘In Cauda Venenum‘ peppered tonights setlist and worked very well alongside the selected tracks for this evening, just proving that Opeth are not resting on their laurels when it comes to their ability to push boundaries and explore more uncharted areas of their talents. 5/5

New album In Cauda Venenum is out now from all good record stores and available on a number of streaming platforms.

Check out the full gallery from the show below. Photos courtesy of Down The Barrel Photography © 2019.