Opeth have announced that they will be touring Europe this fall in support of their forthcoming new studio album.

While there’s not much in the way of details of that follow-up to 2016’s “Sorceress” to go on (the band previously mentioned they had 12 songs in the works for it back in 2018,) it would appear that new music may be out by the time this tour commences.

In an interview with Guitar World last year the band commented on the possibility of the new album being released early 2019; “We’re very much into the demoing. I’ve recorded a lot of solos so far. And Mikael [Akerfeldt, guitar/vocals] has almost already written 12 songs for the new album, so we have more material than enough for an album. But I think we will at least try to finish 15 songs. So hopefully we’ll work on song ideas very soon.”

Saying the band is aiming to release the record during the first quarter of 2019, Fredrik added:

“I’m not sure if it’s gonna happen, but we’re working towards that, and the songwriting goes very well. Mikael has been very productive these last… since January, basically. We did the last touring for ‘Sorceress’ in November.”

As for the musical direction of the fresh material, Akesson said:

“Compared to the last three albums, I would say, if I can reveal anything, this album is more complex, more energetic, and I think it’s gonna be something.”

The guitarist added about the creative process:

“The first filter is the guys in the band, I would say. If we enjoy it, we can only hope that people that enjoy listening to Opeth will enjoy it; that would be nice. But if we’re happy with it, we will release it; it’s quite simple.

“I think this is kind of a ‘Mikael question’ in a way, since he’s the creative director for the band, so I know, speaking for him a little bit here, that he always tries to push everything into something new. And I think people will enjoy this new album.”

The full list of European dates are listed below; 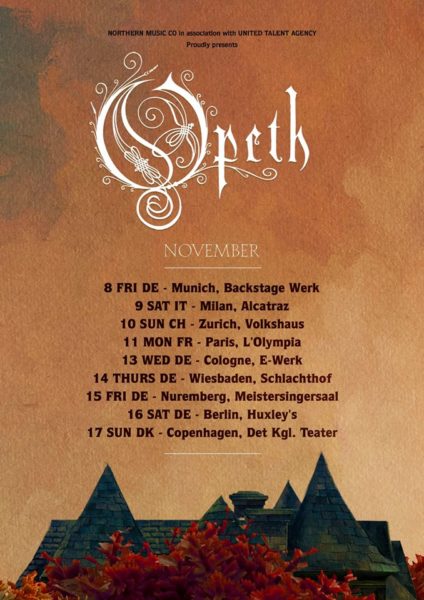